Arizona – An Arizona student-athlete came up short in getting away with a yearbook prank. Red Mountain High School student Hunter Osborn, 19, faces a whopping 69 counts of indecent exposure after authorities say he flashed his genitals in the football team’s yearbook photo, according to KPNX-TV. The stiff punishment accounts for each person present at a photoshoot where Osborn let his penis hang out over the waistband of his football pants in the now-tarnished photo obtained by the TV station. He also faces one felony count of furnishing harmful items to minors. Osborn defended the brazen stunt to police as a dare by his teammates.

I’m not saying Hunter Osborne shouldn’t be punished for Hanging Brain. If I was unknowingly within striking distance of a dick out of its saddle I wouldn’t be too thrilled, either. But, come on now. Does this kid really deserve to go to prison and essentially have his life ruined over this? It’s not like he went full Charles Haley and started jerking off in his coach’s faces. Stupid kids do stupid thing in their youth. Add in the fact his dick is so unremarkable it took MONTHS for it to be discovered and that should be more than enough humiliation. Plus look at him. That’s the face of that man who will whip his dick out on a whim for a laugh. The wrist watch, helicopter, even The Goat – Hunter’s done it all. If anything they should’ve seen his gentiles coming from a mile away. 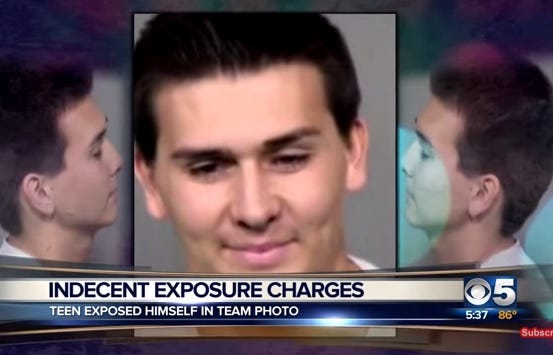 You know, Arizona has gotta be hot during training camp in that dry heat. Compression shorts with baby powder can only go so far. Maybe it just needed some air. Sometimes they need air. It’s inhumane.