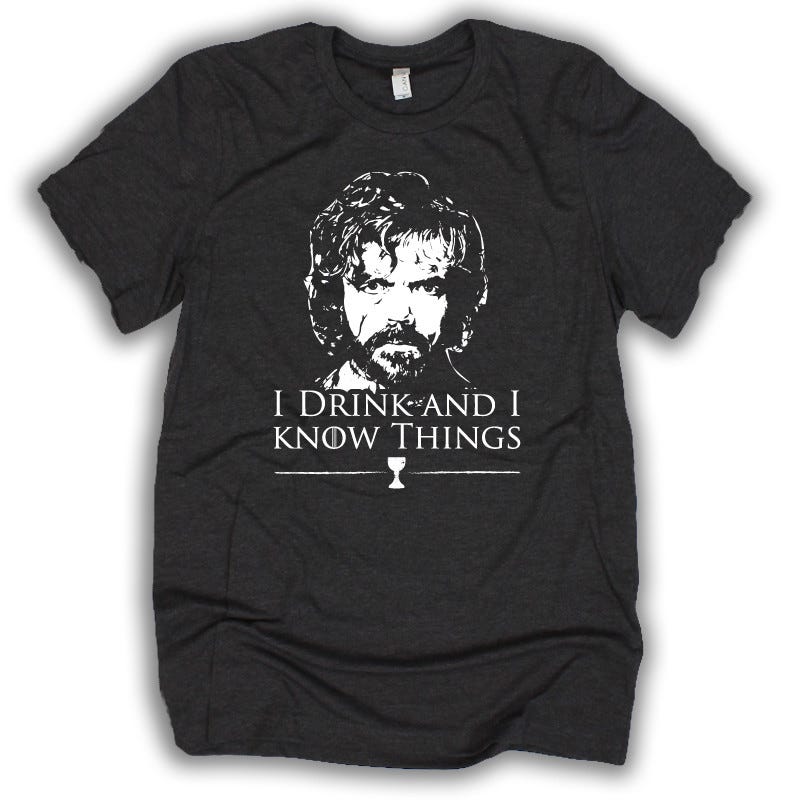 Watching the reaction to Game of Thrones all yesterday, I noticed something kind of funny. While the ONE BIG THING (I don’t really care if I spoil it. If you’re on the Internet you’ve already seen it. Jon Snow came back to life. There. I said it.) was the main thing people were talking about, people were going NUTS over this Tyrion Lannister quote “That’s what I do. I drink and I know things.” It was a walk-off quote and one that is destined to live forever in Tinder, Twitter, and Instagram bios, the true test of meaningful staying power for any writer in the 21st century. But was it the best Tyrion quote? Tough to say. Tyrion Lannister legitimately might be the most quotable character in television history. When you’re character is defined by your punchy wit, intelligence, and you’re routinely shoved in death-defying existential peril, it makes for some pretty decent lines. To figure out where the quote everyone is losing their minds about, I compiled Tyrion’s 12 best quotes from the first 6.2 seasons of Game of Thrones. The Dirty Dozen:

11. “I’m not threatening the king, ser. I’m educating my nephew. Bronn, the next time Ser Meryn speaks, kill him. That was a threat. See the difference?!”

10. “We’ll come up from behind them and fuck them in their asses!”

9. “I’m not questioning your honour, Lord Janos…I’m denying its existence.”

8. “Oh, I’m a monster?! Perhaps you should speak to me more softly, then. Monsters are dangerous and just now kings are dying like flies.”

7. “A day will come when you think yourself safe and happy, and suddenly your joy will turn to ashes in your mouth, and you’ll know the debt is paid.”

6. “Its not easy being drunk all the time. Everyone would do it if it were easy”

5. “Nothing but this: I did not do it. I did not kill Joffrey, but I WISH THAT I HAD! Watching your vicious bastard die give me more relief than a thousand lying whores! I wish I was the monster you think I am! I wish I had enough poison for the whole pack of you! I would gladly give my life to WATCH YOU ALL SWALLOW IT!”

3. “You want revenge against the Lannisters? I killed my mother, Joanna Lannister, on the day I was born! I killed my father, Tywin Lannister, with a bolt to the heart! I am the greatest Lannister killer of our time!”

2. “Drinking and lust… no man can match me in these things! I am the God of tits and wine.”