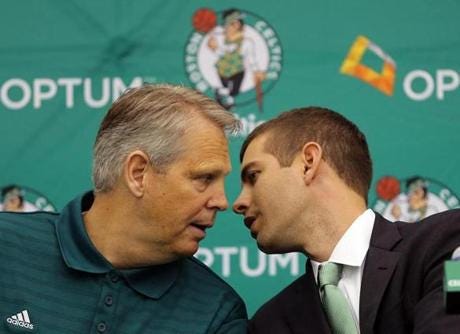 Yes, I know it looks like these two are about to embark on some good old fashioned tonsil hockey. Look past that. Now that I’ve had a few days to mourn the 2015-16 season it’s time to turn the page and focus on the important decisions that face Ainge & Co over the next few months. A lot of what you’ll see here is really dependent on what happens at the lottery on May 17th. But regardless of how screwed the Celtics get, they still have big boy decisions to make on their roster that have sparked hot takes all over the internet.

For starters, to try and predict what the Celtics might do, it’s important to understand some basic parameters as we head into the summer. For starters, this whole exercise begins with the debate on where the salary cap will end up. Heading into the 2015-16 season, the cap rose $7M from the year before. After extensive research (Page 2 in Google) the number I’ve seen predicted most is a $22M jump for next year’s cap. I, like you, get really excited at this number, because it means the Celtics will have a shit ton of cash to throw at big time players. But, so will everyone else, so that sort of sucks.

Now you may be thinking, well shit, if all these other teams are getting more money, how are the Celtics even going to do anything? While that’s true, the Celtics are in a unique position because they have the flexibility to make some moves without blowing up their whole team. Whereas team X may be only able to bring in one FA, perhaps Boston looks like the more attractive option because they can bring in two, and still have most of their good players. We hope.

Which brings us to our first big decision. What the hell are they going to do with their RFA/URFA/non-guaranteed contracts? First, let’s meet who on the roster fits into these groups

I think we’ll get our first answer on draft night. With both Amir and Jonas on nonguaranteed deals, they become instant trade sweetener. While I think the Celts would take both back (or maybe just Amir), if they can be thrown into a package to make a deal work, Danny 100% does it. These two contracts also come into play when you hear people talk about the Celtics flexibility. It makes it very easy to create space. If they aren’t moved on draft night, the Celtics don’t need to be in any sort of rush since they technically don’t need to make a decision until July 3rd. Free Agency officially starts July 1.

When it comes to Jared Sullinger, if you ask around you’ll probably come away with the consensus that people want him gone. I hate to break it to you, but it’s simply good business that the Celtics extend a qualifying offer to Sully (~7.3M). He’ll reject it, and the Celtics will then have the opportunity to match any offer he gets. How high will they go? Well, you can’t forget the cap is going up, so a number like 13M may seem crazy right now, but the cap is about to be like 90M. Personally, that’s a bit rich for my blood, but if Sullinger’s market is only around 10/11M a year, you bring him back.

With Zeller, their hands are sort of tied. If they end up not brining Sullinger back, does Zeller become more valuable? Is that worth extending a qualifying offer to him (~8.3M) and god forbid he accepts it? Or if he doesn’t and he leaves anyway, is that the worst thing? If I were a betting man, I’d bet that they don’t even extend him a qualifying offer by June 30 and he becomes an URFA.

Which brings us to the only unrestricted player on the Celtics roster: Evan Turner. Much like Sullinger, your stance on Evan Turner’s future depends on how high you think the Celts should go on him. Turner made 3.4M this year, and all things considered that was a solid steal. His 10/5/4 on 45% shooting in addition to the role he played was great value. Problem is, it now means you have to pay the price. There are rumors teams like NY are going to go as high as 10M. Personally, I offer him Avery Bradley’s deal (per year). That would be 8M. Maybe a 3 years deal with the last year team option. No clue if he even accepts that, but if he wants to stay in Boston like he says he does, its a win/win for everybody. In reality, it’s going to take more than 8M, and in that case say goodnight to the Evan Turner Era. Things do get a little more complicated if they aren’t able to land that second piece, and maybe in that instance the Celts do what they have to in order to bring him back. Having said all that, is it worth reinvesting in Turner and blocking your young wing players (especially if you draft Buddy Hield)? Hard to say.

When it comes to the draft, my philosophy is easy. Give me the proven commodity. I’ve said it on the radio (nbd) and I’ve said it here in the blog. I don’t care where the pick falls, if you can move it for an established player, you do it. If it’s 1 or 2 and you can get Boogie or Jimmy Butler? Sign me up. If it’s 3-6 and you have to move it + a player to get one of those guys. Yes please. As special as Simmons or Ingram COULD be, let’s not talk like this is the 2003 Draft or something. Now keep in mind that if the Celts win the lottery and keep the pick, you can practically kiss that second “star” player goodbye given the financials of everything. Either way, they are going to have to choose, can’t have it all.

At this point, it’s hard to imagine absolutely everything working out in the Celtics favor (a top 2 pick, trading for one superstar and outright signing another). Something has to give. To me, right this moment, it’s the Kevin Durant outright signing. I think if this pick is in the top 2 and they move it for a key player, that’s probably all the “fireworks” we see this summer. With that move they continue to improve, and then just rinse and repeat in 2017. A high Nets pick + a player for that next piece. What if Durant only signs a 1 year deal to stay in OKC (my hunch), and now he’s seen this new group play? In that instance I think you have better odds of getting him. He’s only 27, I can wait.