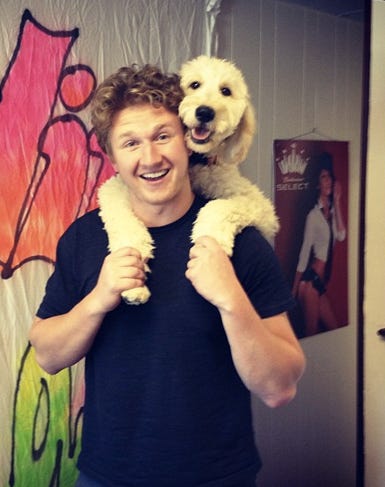 What is she’s hugging me, hmm? What of that?

(PsychToday) — I can summarize the data quite simply by saying that the results indicated that the Internet contains many pictures of happy people hugging what appear to be unhappy dogs. In all, 81.6% of the photographs researchers scored showed dogs who were giving off at least one sign of discomfort, stress, or anxiety. Only 7.6% of the photographs could rate as showing dogs that were comfortable with being hugged. The remaining 10.8% of the dogs either were showing neutral or ambiguous responses to this form of physical contact.

I suppose that one aspect of the data that struck me as interesting comes from the fact that the photographs that I used were obviously posts by individuals who wanted to show how much they cared for and shared a bond with their pet. This means that the people who were doing the Internet posting probably chose photos in which they felt that both the person and the dog looked happiest. Nonetheless, around 82% of the photographs show unhappy dogs receiving hugs from their owners or children. This seems consistent with other research which suggests that people, especially children, seem to have difficulty reading signs of stress and anxiety based upon their dogs’ facial expressions. (Click here for more about that.) Much more relevant for the current question is the fact that this data clearly shows that while a few dogs may like being hugged, more than four out of five dogs find this human expression of affection to be unpleasant and/or anxiety arousing.

The clear recommendation to come out of this research is to save your hugs for your two-footed family members and lovers. It is clearly better from the dog’s point of view if you express your fondness for your pet with a pat, a kind word, and maybe a treat.

I’m not one to go against studies a lot. You tell me doctors say that drinking copious amounts of alcohol and having a carb-based diet is bad for you because studies say so? Ok, I’m suspicious my mom paid those running the study off, but I’ll believe you. Global warming real? Yeah, studies say so. Did you study for the test? Good, I’m going to cheat off you. A single utterance of the word “study” assures me that the speaker has put in more work than me and I should heed their advice.

But not this time.

For starters, I refuse to believe it because this “study” was based on 250 pictures. Two hundred and fifty photos is all you need to tell dog owners that they’re torturing the most important thing in their life simply by showing it affection? That’s irresponsible. So you found some shots of dogs that said they hate hugs, I can grab 250 photos that say 100% of men are buxom blondes.

Secondly, maybe these dogs looked bothered due to the fact that everyone who posts a picture of a dog tries to make it perfect so as to continue the lie that their lives are havens of happiness? You ever take pictures with a girl? They immediately stretch for the phone to inspect every aspect of the photo with a detective’s eye then say, “No I look fat. Delete that one. Let’s do it again.” By take 10 I’m pretty fucking miserable too, but I still like attention from women. You think Spot is thrilled that he’s gotta take 15 pictures because he wasn’t looking at the camera or because his owner’s got a double chin? No. He’s fucking sick of sitting their for his portrait, it’s been 5 minutes and he hasn’t licked his nuts, but he doesn’t hate getting hugged.

I can’t lay down in the same house as my dogs without them coming over and trying to nuzzle under my arm or jumping into my lay, stomping on my dick, and trying to cuddle. They’re clingers. They’re the girl you hooked up with who gives you an eye when you try to to subtly hint that she should leave, “Oh no, no, no, pal. You brought me here and now I’m your responsibility. Deal with it.” You’re trying to tell me that these guys hate loving attention? Fuck off.

I’m going to keep hugging my dogs despite what your highly intensive 250 photo study says, Psychology Today, and there’s not a thing you can do to stop me.