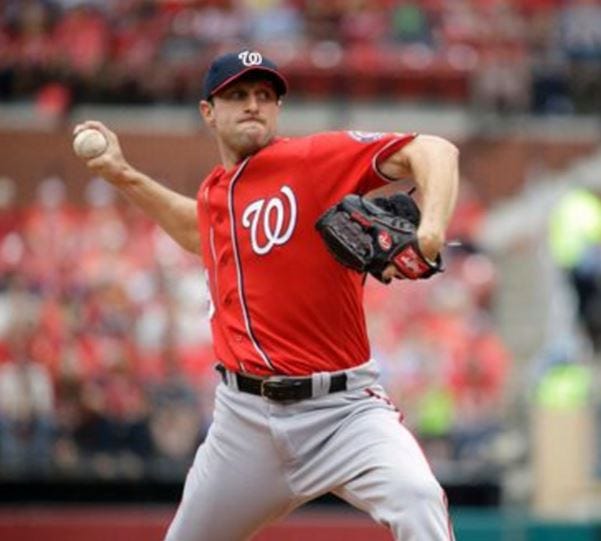 The Nationals’ struggles against the Phillies are long forgotten after sweeping the St. Louis Cardinals at Busch stadium for the first time in the history of the Nationals franchise. The most important take away from the weekend was Max Scherzer pitched like the ace that he is (and he hit like an all-star too). Scherzer threw 7 shutout innings while surrendering just 4 hits (all singles) and striking out 9. He looked a lot more like the pitcher that he was in April or May of 2015 than the guy we saw in April 2016. Sure, its only 1 start but the Cardinals have a pretty good lineup and I wouldn’t bet against Scherzer succeeding … ever. The Nationals rotation is one of the best in the game with Scherzer and Strasburg at the top, Joe Ross (with an ERA below 1.00), Gio Gonzalez (with an ERA below 2.00), and Tanner Roark (with an ERA of 2.03 and 14 straight scoreless innings).

Offensively, every starter had a hit (and Scherzer had 2) except for … Bryce? Bryce Harper struggled and actually wore the golden sombrero but the rest of the lineup stepped up in a big way and unlikely heroes put together much of the team’s offense. The scoring started with impressive small ball where Jose Lobaton singled, Max Scherzer sacrificed him to 2nd, and Matt den Dekker knocked him in. In the 7th, the scoring was a bit more ‘long ball’ and Clint Robinson knocked his 1st homer of the season (and tied his entire April hit total of 1) and was immediately followed by a Danny Espinosa blast. Espy is only hitting .188 and certainly is not the team’s best option at shortstop but he has hit two homers in the team’s last three games. Daniel Murphy knocked another RBI because that’s what he does and, finally, Chris Heisey blasted his 2nd pinch hit homer of the season and is developing into a valuable option off the bench. 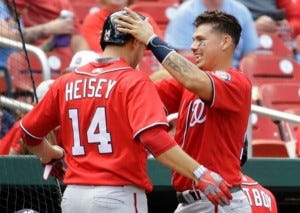 Sunday’s game and the series against the Cardinals were each perfect scenarios for the Nationals with concerns about the team’s offense, the team’s bench’s struggles, and Scherzer’s rough go of it all answered. And obviously nobody is worried about Bryce. He had a bad weekend but the Nats still swept the Cards in their house, pretty good sign. The Nats look to extend their 3 game winning streak tonight with Gio Gonzalez on the mound at the home of the reigning world champion Kansas City Royals.