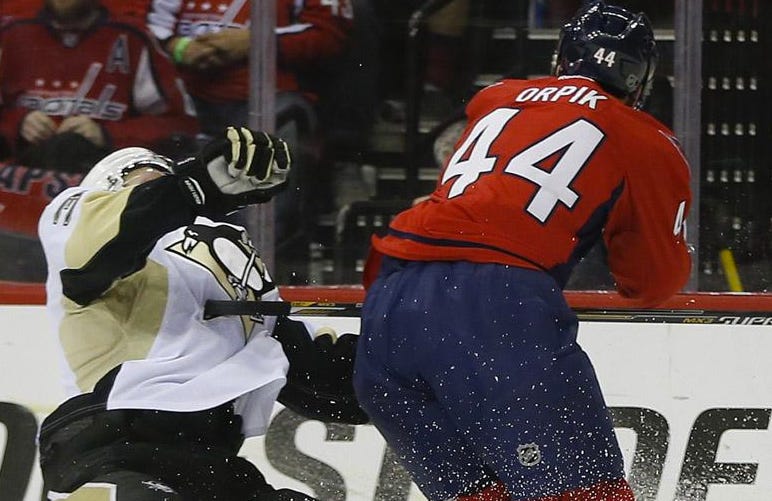 Washington Times - A hit on Olli Maatta in the opening minutes of the first period on Saturday has led to a three-game suspension for Brooks Orpik, who will be forced to sit out the remaining guaranteed games of the Washington Capitals‘ second-round playoff series against the Pittsburgh Penguins on Monday.

Orpik was suspended by the NHL on Sunday night, with the league ruling that his hit on Maatta in the Penguins‘ eventual 2-1 victory in Game 2 was “forceful, unacceptably high and excessively late.” The resulting injury and Orpik’s disciplinary history — he has been suspended twice previously — led to the ruling.

Maatta, who apparently sustained a concussion, needed to be helped off the ice by teammates and athletic trainers and did not return to the game. Penguins coach Mike Sullivan told reporters at the team’s practice facility on Sunday that he is “probably not optimistic” that Maatta will be able to play on in Game 3 of the tied series on Monday but said he was unable to provide further specifics.

To put it kindly, the Caps absolutely sucked on Saturday. They looked uninterested, lazy, and completely lost against the Pens until the 3rd period. I blogged it 100 times during the regular season- that might fly during random Wednesday night games against Carolina, but it won’t fly during tight playoff games. And so the Caps were outplayed and lost game 2 to the Penguins 2-1. The optimistic view of it that I have is that even though Pitt dominated 2/3 of the game, the Caps still were in a good position to win. They were a disallowed goal and a puck off the post from taking the lead late in the 3rd. We know if the Caps play their A game all 3 periods instead of just in the 3rd they are the better team. They just have to do it, which apparently is easier said than done.

But they will have to do it without the help of Brooks Orpik, who will miss the next 3 games after giving Olli Maatta a concussion. The hit was high and the hit was late. Brooks led with his shoulder, but the timing was so late that it was obvious he would be suspended. I thought he would only get 1 game (he hasn’t been suspended since 2006- that’s 10 years with a clean record), but the NHL wanted to send a message and gave him 3. I’m not really going to argue against it, it wasn’t the cleanest of hits you’ll see, but I’m not sure it warrants 3 games but whatever.

Basically it’s whatever because Orpik has kinda sorta sucked this series. He was fine in a physical series vs the Flyers, but the Penguins are too fast for him. This series is so much faster and the up and down game is so much more important that it’s better to have Orlov’s puck moving abilities than Orpik’s physicality. And let’s be honest, Orpik’s defense hasn’t exactly been spectacular enough that it’s that much of a drop-off to Orlov’s. Coach Trotz doesn’t exactly trust Orlov in the defensive zone AT ALL because of the turnovers he’s prone to make. But when it comes down to it, Orly’s speed and offensive ability is needed right now.

It’s never easy to win on the road in the playoffs. But the Penguins split the first two in DC, so the Caps need to do at least the same up in Pittsburgh. Need, need, neeeeed the Caps to get off to a hot start- no more lackluster first period efforts if they want to keep these playoffs going.