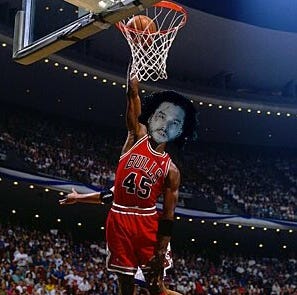 What an episode of Game of Thrones we were treated to last night. Game of Thrones is, to me, the Pedro Martinez of television: While you could argue some shows have delivered more consistently, their best pitch is better than anyone else’s. Episodes like last night are why we keep returning for Thrones, because when the A-game gets busted out, the show is legitimately breathtaking.   And right at the time the show, and the fans, needed a fastball the most. Let’s face it, last season, even with Hardhome, was the worst season of GOT by far. The first episode, while I thought was very good and set the table well, gave a hint of fear that we were in for another slogging, slow-moving season of Dan Weiss and David Benioff treading water while waiting for George RR Martin to finish up the books. Basically we Game of Thrones fans were all high school kids at a party that we’ve been looking forward to all week but isn’t quite living up to expectation, so you’re all trying to convince yourself and each other of what a blast you’re having – “We’re having fun right?!?! RIGHT?!?! ISN’T THIS FUN YOU GUYS?!?!”

And it wasn’t just because of Giants head-bashing, the Mountain head-bashing, Dragons, and Jon Snowsus Christ resurrecting. Every single storyline advanced in an incredibly significant way, not necessarily a given the past two years of GOT. The sterling quality of this episode was more than just optics, but also importance.

To me, the most shocking development of the episode was Ramsay’s betrayal. Besides his sadism, Ramsay’s number one defining quality was his fierce loyalty to his Father and the Bolton name. Yes, he was a sick son of a bitch, but he was always a loyal son of a bitch. To betray Roose, the man in front of whom he practically wept when he legitimized him, genuine emotion from a man who doesn’t seem to have emotions, was the most surprised I’ve been with the show in years. And let’s be honest, while Ramsay is an incredibly entertaining character, he was getting a little stale. You can only be a torturing sociopath for so long before you sort of get it, “Hey George, Ramsay is fucked up. We understand that. Do we have to keep revisiting this?” For his allegiances to shift so unexpectedly and drastically was stunning. Now in charge of House Bolton is a Ramsay capable of anything, even more power hungry than we imagined before, and absolutely no political instincts. Winter is coming, but chaos is coming to the North too.

But the North isn’t the only region on the precipice of bloodshed and pandemonium. In the Red Keep, the silent sizing up between the Sparrows and Lannisters has now devolved to open hostility, and we finally saw the Sparrow for who he truly is: a highly politically-motivated manipulator who knows exactly how powerful he is, or more specifically, how powerful he can become. As Cersei explained last episode, a big piece of the Lannisters died with Myrcella, who represented the last of the innocence and “good” side in the Westeros Kennedys. The Lannisterification of Tommen is beginning, and he for the first time showed signs of the dark rage that now entirely consumers his mother. By asking for her help, he has also implicitly submitted himself to by her proxy for power in the capital. Take that situation, add in the basic human instinct of when holding a hammer, everything looks like a nail, and remember that the Mountain is as big as hammers get. Look out.

(And also, I wouldn’t be so cocksure if I was the High Sparrow that I’m going to win over the popular support of the people of Kings Landing in a possible civil war. They may hate the Lannisters, but every scene of the Kings Landing commoners depicts them as somewhat depraved Sin City dwellers who like to eat, whore, and drink. I’m not certain they’ll love some barefooted priests with scars on their forehead running up and telling them what to do.)

And now some bulletproofed points so your eyes don’t bleed from staring at the screen too much before getting into the real meat and potatoes of the episode:

-The Iron Islands storyline is going to be, as the children say, very lit. Every book reader did a fistpump when Euron Greyjoy appeared. I mistakenly thought it was Victorian Greyjoy at first, but I’m pretty sure they’re combining the two characters into one. This is hopefully going to be the anti-Dorne.

-While Theon will never get full redemption, what he did to the Starks was too unforgivable and there’s no coming back from it, I’m glad to see the humanization of Theon continue. He won’t ever die a hero, but he can at least die a human being.

-The Red Lady questioning her faith is another blur in the line between religion and magic in the Westeros universe. Someday, the subject of religion in Westeros will get like 500 words on it’s own so let’s save it for later.

-Arya’s storyline had a definite whiff of “absolutely nothing is going to happen with this storyline this season and it will make you all want to punch holes in the wall.” Glad we were wrong and it looks like it’s progressing.

-As a strong believer in gender equality, I’m a little miffed at HBO for not showing Kit Harrington’s dick for the sake of the female viewership. That’s probably the best chance they’ll get at it, and we male fans got to see Margaery and Daenerys topless too may times to not repay the favor with some Lady Throners.

-Bran is being used, as predicted, a portal to the backstory and history of Westeros. Nothing he saw will be very important most likely, that Hodor bit was just some meat to throw at the fans, but the fact he CAN look back, will be a way to provide a lot of context on the history of Westeros to non-book reading TV viewers. By the way, we’re getting The Tower of Joy next episode, which for 99% of book readers, was the one scene they most wanted to see on the show. Get fucking hype.

-My firstborn son’s name will be Wyllis-Hodor.

-Tyrion two seasons ago does not go in that lair to confront the dragons himself. He comes up with a different plan or finds someone else to do it. Not because Tyrion lacks courage or curiosity, he has repeatedly proven he has both in spades, but because it was reckless, and calculating Tyrion doesn’t do reckless. But that’s how Tyrion is different now than him in seasons past; he is no longer afraid to die. That type of disregard for yourself can be a dangerous but also a valuable skill in Thrones. Also, the depth of his knowledge and clear obsession with dragons (which they make a point of highlighting in the books) should certainly raise a few eyebrows with the more conspiracy-inclined of us.

And finally, for the grand finale, let’s check the Jon SnOmeter! 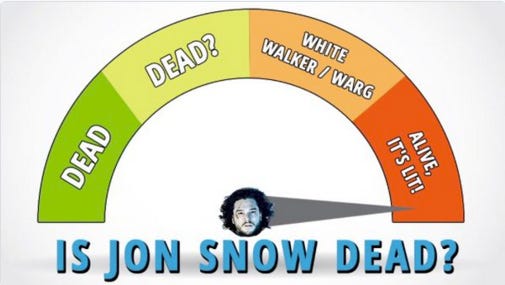 Oh it’s lit!!!!!!!   Look, was the way Snow came back, with Ghost by his side, in a Christ-like pose, with the conveniently present Red Lady, extremely predictable? Yup. Was it the way we all, not being creative geniuses, would have scripted it? Sure was. Do I have a problem with that? No I don’t. That scene was like going to your favorite restaurant and ordering the usual, it doesn’t have to be a surprise to be a delicious meal. Sometimes it’s best just to give the fans what they want. And for a show that RARELY adheres to that and actually delights in making it seem like they’re about to give the fans what they want only to instead deliver a swift kick to the testicles, it was a gratifying experience.

The signature character of the show is back. We wanted more Jon Snow. We needed more Jon Snow. And we have Jon Snow. Everyone should be happy about this. There is a huge convergence of characters coming to the North with Sansa heading there for safety, Ramsay heading there with Jon’s death warrant (oh good the married couple gets to see each other again, I love romantic reunions!) , and the White Walkers coming down trying to recreate Season 74 of the Walking Dead, our favorite hero is now the center of the action once more. These are all good things. I’m very Bart Scott about all of this and can’t wait to see what’s on deck next week. Is Jon Snow still bound to the Nights Watch now that his watch “ended” with his death? Is he still Lord Commander? How will everyone react to seeing him? Does he have newfound powers? How is he different? Did he learn anything new on the other side that will help with the White Walkers? Will he even care anymore? Will Alliser Thorne have the oh shit awkwardness of giving a kid a swirly in high school only to find out 8 years later he’s your boss at your new job? This episode of Game of Thrones might have given us three questions for every answer, but they’re all questions I’m dying to know the answer to.

Twitter is @CharlieWisco . Here’s the newest weekly feature, Best Game Of Thrones Tweet of the Night. This week’s winner is Nathan from Massachusetts. Send me all your favorite Thrones tweets every Sunday night and each week I’ll pick a winner.

And here is the podcast/zcast that Clem and I do every Sunday night around 10:30 PM ET following the show. To get the link in order to listen live, make sure to follow me on Twitter. Or wait until I publish the podcast at the bottom of my recap blog every Monday.