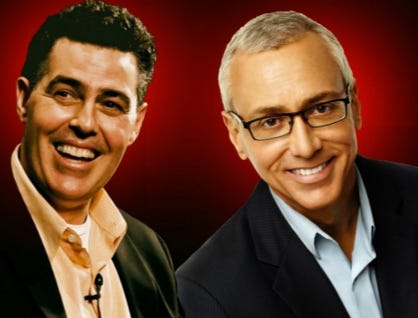 If you want to watch the final show or just skip around, have at it:

IW - Dr. Drew Pinsky wasn’t ready to give up the nationally syndicated radio show “Loveline,” even though he hasn’t been paid a salary in over a year. But when co-host Mike Catherwood departed at the end of March, Pinsky knew it was time to finally pull the plug. After 32 years of dispensing relationship and health advice five nights a week, Pinsky will host the final episode of the call-in advice show on Thursday night. Still, after Catherwood exited last month, “it wasn’t clear that [Los Angeles flagship radio station] KROQ was terribly interested in continuing the program five days a week,” he said. “I thought, rather than drive this thing into the ground, it was time.” Pinsky continues to host a mid-day radio show with Catherwood on KABC-AM in Los Angeles, and will now expand a podcast he records with comedian Adam Carolla, who co-hosted “Loveline” with Pinsky between 1995 and 2005. Even though the business model for “Loveline” appears to have vanished in recent years, Pinsky marveled at how long the show lasted. (Co-hosts through the years have included Jim “Poorman” Trenton, Riki Rachtman, Ted Stryker, Carolla and Catherwood.) “I’m surprised at that, given the advent of the internet,” he said. “It used to be radio was the place that young people gathered to get their information. When I started out, no one would talk to young people about HIV or AIDS. I looked around and radio looked like a powerful way to shape culture in a healthy way.”

This is a very, very bittersweet blog. If you’re like….under the age of 23, you probably don’t realize what radio used to be. There used to not be wifi. Every 7th grader didn’t have a laptop. You didn’t have cell phones, nevermind smart phones, podcasts, all that good stuff. You would get in bed and listen to the radio, either your clock radio which doubled as your alarm clock, or you put on headphones and listened to a hand-held radio so your parents couldn’t hear it. And Loveline with Adam and Drew was a staple growing up. It was funny, entertaining, fascinating, educational, and all around taught so many kids and young adults so much about themselves and the world around them. I know way, wayyyyy more about addiction, abuse, and just humans in general because of this show.

And they were just so smart. They could sniff out junior college from a mile away. Could sniff fake phone calls from further. And it was always amazing when a caller would call in and this interaction would happen:

Adam would be like “Jen, 21, Wyoming, welcome to Loveline”

Drew: Ok Jen, how old were you when you were abused?

Dr. Drew helped so, so many people both directly by talking to them on Loveline, and indirectly by giving advice to the millions of listeners. He did it in a world before the Internet, when talking about addiction, abuse, sex, STDs, you name it was not as common as it is now.

Adam, while he doesn’t like to take credit for being anything other than the funny guy, was hand in hand with Drew. Adam wouldn’t beat around the bush with you- he’d tell you to stop being stupid and to get your shit together. The way he could handle phone calls about serious subjects with such brilliance and humor is so hard to describe.

Here and there I’ll go down a YouTube rabbit hole of classic Loveline calls. It’s a fantastic way to spend a Saturday morning. Learn a little something and laugh your ass off. I could listen to Adam yell at people to stop having kids for the rest of my life. Or give advice to 13 year olds. I’ve listened to this call 100 times and laugh every time. Adam is just so good.

So goodbye, Loveline. You were a great show and so helpful for so many people for so many years. Mahalo.