There is no way to make it sound like the Yankees have been playing well. I do believe that this can and will turn around because eventually these guys will hit like the back of their baseball cards or at least close to it. People want to blame the pitching, which sometimes has been bad, but we are getting quality starts needed to keep us in games. People want to fire Girardi, but what will that do? Joe has outperformed projections the last few years and is doing all he can to move guys around to get them comfortable. It’s not like the players aren’t playing hard for him. A managerial change in April won’t do anything but what Cone tweeted got me thinking.

Maybe these guys aren’t drinking enough. Besides CC these guys need to go out one night and burn a city to the ground to build some camaraderie. A lot of these guys have played together before, but when you play for the Yankees the world is watching, so it’s tough to be yourself which in turn makes it tough for your teammates to know you. If you look at the Yankees who won championships for us, you have guys like Cone and Wells holding court at Dorrian’s after home games and Boggs drinking enough Miller Lite to make a frat boy blush. Jeter was in and out of nightclubs with his clique and I’m terrified to know what happens when O’Neill gets a few in him. It brought some bad headlines and fights with The Boss. But it also brought championships.

In 2016, we get the pictures on social media where half the team goes out to dinner and everyone is posing for a picture. But that the exact opposite of what I’m talking about. I want this team to leave their phones in the hotel, have a ban on social media and buy out a bar. Slam drinks, tell jokes and bond with each other. At least if they do that and something goes wrong their identity will be party animals, which is better than the team that can’t hit with runners in scoring position.

PS: I’m not against Cone making a comeback. 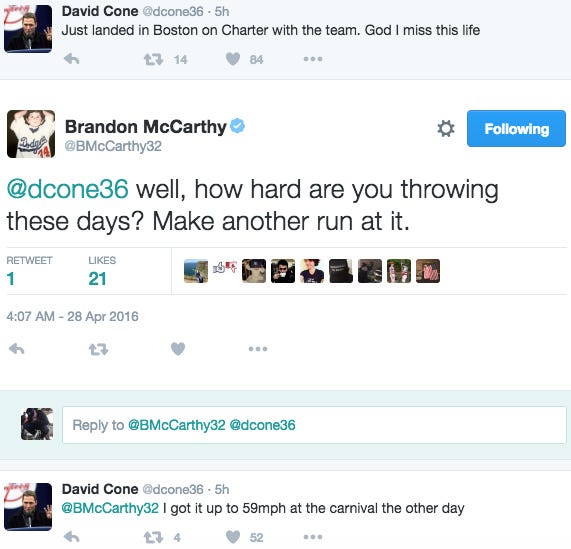