Nunez has a very hot bat and while I wouldn’t recommend giving up all that much for him, he could be a valuable pick in the upcoming month. Nunez was hitting .432 entering yesterday and while his BABIP is probably the main reason for the high average, he’s got some real valuable traits. Nunez is Minnesota’s leadoff hitter and while the lineup as a whole might not be all that great, Brian Dozier, Joe Mauer, and Miguel Sano hit right behind him and give Nunez plenty of opportunities for runs scored. Nunez is by no means a speed demon but already has 4 swipes this year and can be counted on for 20+ over the course of a full season. He has all but eliminated soft contact this season and is yet to hit an infield fly ball (infield flies are basically automatic outs and were a major weakness of Nunez’s in years past). Further, with starting 3B Trevor Plouffe injured, Nunez has been filling in at the hot corner and is just 1 game away from earning eligibility in ESPN leagues. Now, while Nunez has been great, you have to know when to use him – he’s a career .285 batter against righties and probably shouldn’t be in your lineup when the Twins are facing a lefty starter. Give him a chance and he could surprise you with his production in the next month or two. 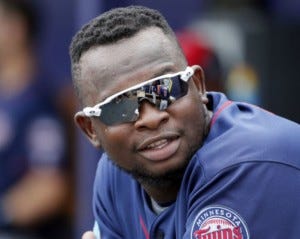 Prior to the season, I ranked Sano as an overrated pick and the general sentiment in the first three weeks is that I’ve been right. Sano is striking out a bunch and has shown some pop with 3 blasts in the past week – essentially what we expected. So what’s changed? Peoples’ perception of Sano. Entering the year, he was viewed as a top 40 player and now, he just isn’t – he is much more properly rated. If you are in a keeper or a dynasty league, do everything you can do nab this guy while you still can. In a redraft league, be cautious of his still sky-high BABIP but also try to take advantage of an owner who might be disenchanted with the slugger. 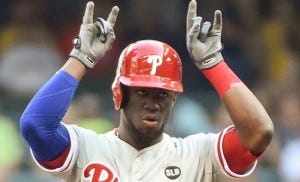 I really have no idea what to make of Odubel Herrera. The Phillies’ 2015 rule 5 pick managed to quietly breakout in the 2nd half of last year. Herrera hit .329/.394 in 259 plate appearances since the all star break and managed to blast 8 homers (including 4 no-doubters) and steal 16 bags in his rookie year. Herrera’s high BABIP, presence on a bad team, and high K to BB ratio are all reasons why he didn’t really pop up on many radars during draft season. The BABIP is still high (but maybe he’s just a player who will always have higher than average BABIPs) and the Phillies are still pretty bad but, through 19 games in 2016, Herrera has walked 17 times (he took his 17th walk on August 28th last season) and this increased walk rate is at least somewhat legitimate and a testament to Herrera’s hard work – last year, he took 10 walks from April through August 1st and 18 in the final 54 games of the season. Herrera has seen 6.33 pitches per at bat thus far in 2016, a ginormous upgrade from the 5.35 that he saw in 2015 (and an even bigger jump from the 4.19 pitches per plate appearance that he saw in the first half of last year). Herrera is doing everything it takes to become more selective and to take more walks and it is paying off in a big way. This guy can give you 10 homers, 20 steals, some runs, and a pretty solid average. Get him while he’s still cheap and relatively unknown.

JA Happ, like Odubel, is another guy who made many of his changes late last season. Under the tutelage of Pirates’ pitching coach Ray Searage, Happ transformed from a back-end starter into something more. In his final 10 starts, he K-ed 9.6 with a 1.37 ERA and, while the Ks have not carried over and his peripherals don’t look too strong, he has been getting outs and should be owned in 32% of leagues. To be honest, I don’t see Happ holding up this production all season but he’s the type of guy who can give you excellent starts from now until June then you can trade him while his value is high and let someone else deal with his potential fall. 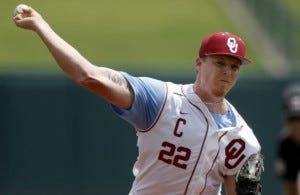 Gray is the rare Colorado pitcher that I am recommending but I am NOT recommending him outright – you should start him when he’s away from Coors Field but behave with caution when Gray pitches at home. The 3rd overall pick in 2013 (right after Kris Bryant) can throw hard and can strike batters out. He is 6’5, 255 pounds and throws 96 – I don’t care if you’re Bryce Harper, that’s scary. Anyways, Gray pitched 40 innings with mixed results last year and by mixed results I mean he was ass at Coors field and excellent in opposing teams’ stadiums. Gray was a bit unlucky last season but still put up a 2.70 ERA and 11.3 K/9 rate away from home last year. In his first start of 2016 (at Coors), he struck out 10 batters in 5 innings and though he did surrender 5 runs, it was an encouraging outing against a tough Dodgers‘ offense. Gray has some real potential and should be rostered and started away from Coors Field.

Pomeranz hasn’t held up a full starter’s workload well… ever. He hasn’t ever thrown 100 innings in a season and he will always deal with walks. This is not a guy who you want to hold onto for the long haul but is rather someone who has the stuff (and the pitcher’s ballpark) to give you a steady stream of Ks and a decent ERA in the situations when he does pitch. So buy in but don’t go ‘all in’ on Pomeranz.

6 DOWN – Try to trade or avoid

Story was an incredible story. With his 7 homers in his first 6 games, he swung his way into the hearts of thousands of owners but, since then, he’s swung his way through a lot of pitches. I hope that if you owned Story, you traded him for a huge profit and I hope that if you traded for Story, you didn’t give up too much. Trevor Story has power and he plays in a great batter’s park but he isn’t the super slugger that we saw in the very early going (though he strikes out like one- he is K-ing in 37% of his at bats). If I were to set an over/under on total homers for Story, it would be 26.5 and I’d take the under. Try your best to salvage a top-rate return for Story before it is too late.

I had called Gomez extremely overvalued in the preseason and, even with his struggles, he is still valued more highly than he should be. The absolute max value Gomez will give you is something like 15 homers, 15 steals, and a .260 average and that doesn’t even seem very likely. Trade Gomez for anything that is relatively good and sit back as he continues to disappoint. He is striking out well above his career rate and is walking well below his standard rate (which was never high to begin with). Compounded is the fact that Gomez just isn’t connecting on pitches that he had in the past. 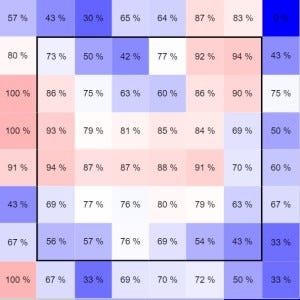 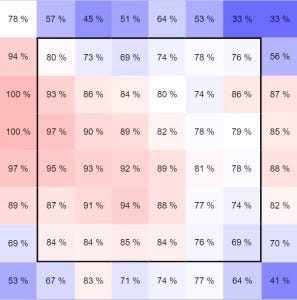 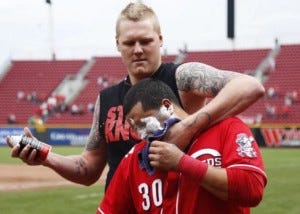 Looks like Jonathan Papelbon who is, coincidentally, also an asshole

Latos, considered an asshole by practically everyone, has been one of the biggest feel-good stories of 2016. After an ERA just under 5.00 in 2015, Latos has put together 4 excellent outings to start 2016. Here’s the thing: Latos is still pretty awful. And he might actually be worse (from this point on) than he was last year. Lato’s velocity has dipped to the point that his average fastball is below 90 mph and his stuff is a shell of what it formerly was. Batters are making contact on 89% of his pitches (career average is 78%) and swinging and missing on just 5% (career average is 10%). Latos has lucked out by limiting hard contact, keeping the ball in the park, and keeping batters on base but this isn’t going to last for ever and if you can get anything, literally anything of value for Latos, pull the trigger now. If you don’t own the rightie, stay away.

Adam Wainwright may find the Viagra commercials on TV to be offensive but I’d argue the way he’s pitched this season is even more vulgar. In 4 starts, Waino has struck out 9 batters (and walked 10). Wainwright has been hit much harder than in years past and is giving up far more fly-balls than he has in years past. Wainwright’s name gives him some additional trade value and if you can get even a third of what you paid for on draft day, you’ll probably still come out ahead.

King Felix took a clear step down from superstar-ace last season when he had a 4.48 ERA in the 2nd half. He has been very good in terms of ERA through his first 4 outings of 2016 but the 15 walks are troubling and he has been very lucky with batters left on base and overall BABIP. Felix hasn’t imploded or anything and probably won’t but I would rather get off the train a bit early (and receive a good return) than wait a few starts too long. Hernandez is by no means a bad pitcher now but I’d be much more comfortable with Strasburg or even someone like Chris Archer (who was going to be one of the 6 ‘ups’ before his dominant outing last night) than with Hernandez.

I actually don’t have a ton of specific information to point to that will convince owners to sell on his hot start but I also don’t see any real change to his approach. Segura is essentially the same player that he was in years past and while the first half of his 2013 was excellent, he has been garbage for practically the rest of his career. I’m going to trust his past performance and expect him to regress to the mean. If someone believes that Segura’s start is legit and you play up his great first half of 2013, his hot spring training, and the fact that he plays half his games at Chase Field, you could make a nice little profit in a Segura trade.

Send any fantasy baseball suggestions, questions, requests, or complaints to me at Follow @SAlaskaBarstool