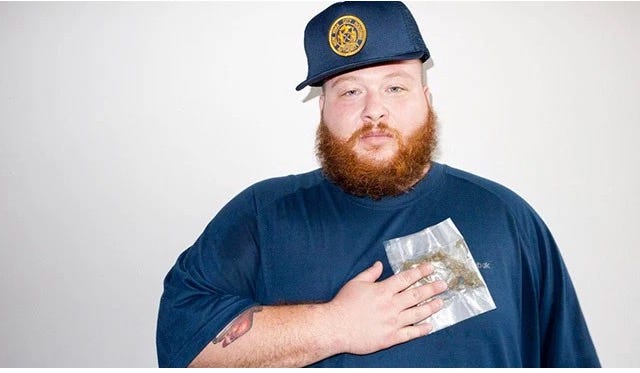 …Despite having done research on all of the musical artists we were looking into, we clearly did not do a thorough enough check into the content of Action Bronson’s lyrics and music videos…

…In the beginning of March we were made aware of the severity and depth of some of Action Bronson’s lyrics. We began to create a strategy to keep members of our community safe and began drafting our response to the backlash that we anticipated…

…As both students and student leaders, we fully agree that it is not only certain songs by Action Bronson that go against the school’s mission. The very act of bringing him to this campus runs counter to the College’s obligation to protect the emotional and physical safety of its students. As the Executive Board of EAC Barnyard, we believe that protecting the safety of our students is our top priority. The Executive Board of EAC Barnyard would like to apologize for considering bringing Action Bronson, an explicitly unconscious rapper, to campus….

Annnnd down goes Bronson for the second time! Poor guy just cannot book a gig these days. First George Washington cancelled his performance at Spring Fling for “not being consistent with values of inclusion”: 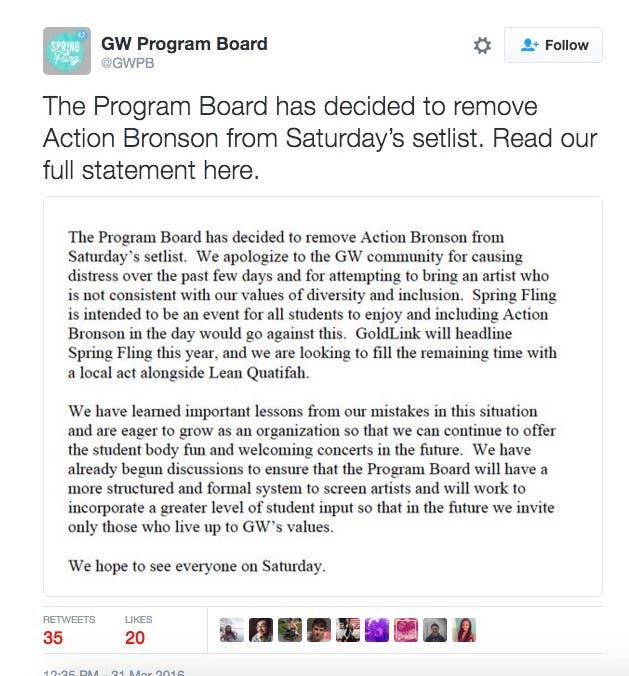 Now not one month later and he finds himself getting the axe again, this time from Trinity College. That one song from 2011 really biting him in the ass.

Bronson actually released a statement about it after the George Washington thing…but clearly it fell on deaf ears.

To the Students at George Washington University and the public at large:

I’m writing this letter to hopefully bring clarity to some misconceptions about who I am as an artist and as a person. It has become clear to me that things have reached a point which makes me feel the need to address the issues raised so that we can bring some understanding and healing to the table, so to speak. I can’t continue to walk around with the thought that people are thinking these things about me that are far from who I really am.

Five years ago in 2011, I wrote a song called “Consensual Rape” that admittedly contains lyrics and a general sentiment of violence towards woman which I never meant to represent who I am but rather to depict a story. I approach my music as other types of artists approach their work, and I don’t always intend the stories that I tell, the characters that I play in them or the lyrics I lay down to be taken literally. The songs I make aren’t any different than a director creating a movie, or an author writing a book meaning they contain scenes or things happen in them that aren’t meant to be anything but an artistic expression- just a song, a book or a film. I’ve never performed “Consensual Rape” at a concert, and I don’t plan to.

Regardless, I understand that when it comes to musicians, and more specifically rappers, the lyrics I say are taken to heart many times as a representation of my beliefs or true feelings. SO please let me make this very clear: I think rape and acts of violence toward woman are DISGUSTING. I would never condone anything remotely close to that type of behavior, and it’s certainly not what I’m about at all. But, the song in question has caused people discomfort and pain and I’m sincerely sorry about it. It was not my intention to hurt people when I made it years ago, and I certainly will be much more sensitive on this matter moving ahead.

Actually crazy that a musical artist has to sit down and write an explanation that his lyrics are meant to tell a story and aren’t meant to be taken literally, but here we are.

I don’t rant about these stories anymore because I think I’ve said everything I could possibly say 100 times by now. Just like to keep everyone aware of what’s going on. Also a heads up to all performing artists out there – make sure you have never at any time in your career said anything remotely offensive while creating music for adult audiences. That is primo safe space violation.