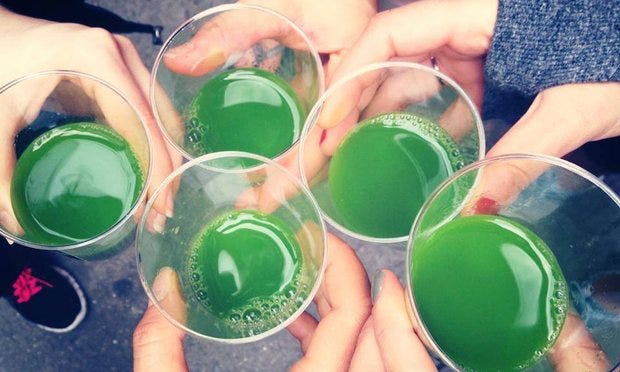 People in Los Angeles and New York have begun appropriating drinking culture by staging “juice-crawls” where a bunch of milleneals get together and voluntarily meet new people while sober for some reason. The Guardian wrote an exhausting piece on just how lame this trend is called “Sober is the new drunk.” It centers around a “Juice Crawl” in downtown Manhattan and the kind of people that you happen to run during these events:

On a Saturday afternoon in Manhattan, Rachel Floyd and her boyfriend Paul Isham take a shot of a dark yellow liquid called Mother F*#%in’ Fireball.

“It kind of makes my leg hair follicles feel like they’re standing out,” says Isham, a 33-year-old audio visual technician

No you don’t feel that way at all, because you’re literally drinking juice. The only reason your follicles are standing on end is because this juice crawl has brought you to a new level of lame where even your hair dosen’t want to hang out with you any more.

Paul has a lot to learn about modern medicine: if something is healthy for you, the only noticible effect is that it doesn’t make you feel like shit. Name one medicine that actively makes you feel good- you can’t and thats because as soon as we discover one we call it a drug and arrest people for using it. Paul’s expereiencing what’s known as “the placebo effect” which is where your body convinces you that something makes you feel better if it leads you to a better chance of getting laid for going along with your wierdo girlfriend Rachels unusual hobbies.

The 26-year-old clinical psychology grad student is on her eighth shot of the day, but she could still pass a breathalyzer test. The Mother F*#%in’ Fireball is not the cinnamon whiskey teenagers steal from their parents around Christmas – it’s anorange-based drink with a spicy kick from a mix of cayenne, ginger and oregano oil.

100% chance the name of this drink is literally “Mother F*#%in’ Fireball” and not “Mother Fuckin Fireball.” And the way the author is talking about my favorite liquor is ignorant. If your parents are the type of folks that casually slam shots of fireball they’re just going to go out and buy you some when your 18. It’s when you get into your 20s and 30s that you have to start stealing it from them because you lost your job.

This group is not full of recovering addicts, but rather people who value mindfulness, spandex and green juice. For those 35 and under, cutting back on booze no longer means social suicide. In addition to juice crawls, there are now sober day raves, alcohol-free bars, boozeless dinner and dance parties and a sober social network that organizes group outings and launched a dating app so popular it has temporarily shut down.

If you don’t want to drink I get it that’s fine, you probably have many nice, clean unvomited-in handbags. But you know who else didn’t drink? That’s right Adolf Hitler. Not saying all sober people are nazis but your judged by the company you keep, and it looks like they’re trying to turn large swaths of New York City into Saudi Arabia with an instagram account. Its great that they have a online community where they can meet other people who also like to judge their drinker friends, but launching an app that was so poorly constructed that it couldnt handle its own user-base is just another day here at Barstool Sports so its really nothing to brag about.

The long line outside of Shine, a booze-free event that combines food, water with “Australian flower essences,” meditation and “enlightertainment” (music, a talk and a film) is full of people who either do not drink or are trying to cut back.

Music, a talk, and a film are all activities that are objectively better while drunk- and if you’re trying to cut back on drinking that’s what beer’s for.

I will say this: the check-in rate on social media for these sober crawls has got to be astronomical. It is possbly the only event that has an engagement rate of over 100% because everyone who is on the tour will post about it online, and so will the people who meant to go but were too hungover to get there at 7:45 AM or whenever the hell it starts. You don’t go on a juice bender and not post about it on facebook, it’s the social media equivilant of giving birth to a child during a yoga class.

Most attendees are millennials with new-agey reasons for socializing sober. Ask and they’ll say they “love real, authentic relationships”, want to “open up to others on the same journey”, and be “centered and calm to appreciate the day”.

In plain speak, they think booze makes interactions less meaningful and that hangovers get in the way of their goals.

This is the one part I can appreciate about this trend- avoiding hangovers. For those of you out there who don’t get hangovers yet-

If you’re that afraid of hangovers (which I am), a better way to deal with them than by simply not drinking would be to organize a hangover crawl instead. You start out at like noon or 12:30- ok, basically 1 PM at a place serving up greasy egg-and-cheese sandwiches, double bloody marys with zing zang and shots of pedialyte. Then move on to a craft-Klonopin bar/beer-rita restaurant that has basically no natural light whatsoever and barely-audible Jack Johnson playing ONLY in the bathroom. We can keep the film part, but its going to be a C-rate Will Farrell comedy that you can nap through for exactly 90 minutes. We’ll host it in a movie theater that has couches instead of seats, give everyone a blanket, an IV, and a way-too-big mixed drink. Boom, then your up and at em and ready to hit a cheesy taco joint that has cubicles around the tables so no one will talk to you. If anyone accepts a phone call from their parents before 7:30 pm you’re kicked off the hangover crawl.

“I want to wake up each morning with a fresh mind so I can write,” says Ryan Fischer, a 35-year-old dog walker and writer who hasn’t touched alcohol for the past few months and recently returned from a shamanic retreat. “At night my dad has a couple of whiskeys and my mom has a Pinot Grigio and they lull into the night. I just don’t want to do that.”

Thoughts and prayers to Ryan Fischer who grew up in a abusive household with parents who occasionally enjoy a couple drinks after an exhausting day of pretending to care about whatever peculiar interests their condescending son was getting into. Enlightened thinkers like Fischer understand that you can’t be a succesful writer if you are hungover or drunk. The quote “I want to wake up each morning with a fresh mind so I can write” seems awfully familiar though.  I can’t remember who said it but so far I have ruled out Hunter S Thompson, James Joyce, Edgar Allen Poe, Allen Ginsberg, Dorothy Parker, Charles Bukowski, Earnest Hemmingway, William Faulkner, Aldous Huxley, Tennesee Williams, Jack Kerouac and any number of other authors that Ryan is better than.

Clinical psychologist Goal Auzeen Saedi says her younger patients in particular have a lot of anxiety about the future, a fact she attributes to financial uncertainty: “I think the pressures are higher because [young] people are seeing that even if you have a great degree, that does not guarantee you a job by any means”.

I’ve said it before but here is my advice for young writers- the only degree that matters is the temperature of your takes.

“Substances are becoming culture not counter culture,” she says, twisting the cap on a bottle of “Kalefornia” green juice. “You see the culture going towards one extreme and you’re going to have the other extreme. Like actually the real rebellion is to not do this stuff.”

You know who the real most persecuted people in America are? White, wealthy, sober, 27 year old Manhattanites who cant get through a soul-cycle class without hearing a singer rhyme “party” with “bacardi.” Staying woke is the new blacking out folks.