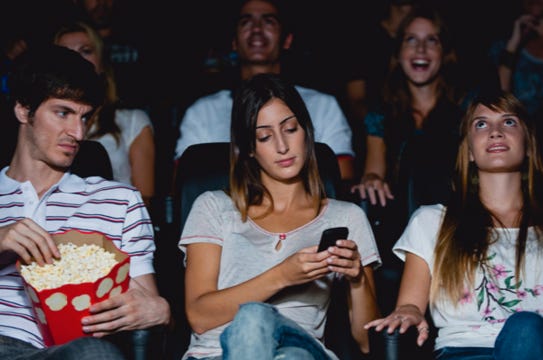 ABC - It was once the cardinal sin of movie theater lovers — texting during a film. Movie previews creatively reminded and suggested and pretty much ordered folks to turn off their cell phones before a film begins, but are text-friendly movie theaters on the way? AMC Entertainment CEO Adam Aron said the movie theater chain is set to test it out to appeal to millennials. “When you tell a 22-year-old to turn off the phone, don’t ruin the movie, they hear please cut off your left arm above the elbow. You can’t tell a 22-year-old to turn off their cellphone. That’s not how they live their life,” he told Variety. Instead of a text-friendly section in a movie theater, Aron suggests that AMC will take “specific auditoriums and make them more texting friendly.”

This is quite obviously a great move. Not only great, but well overdue. Don’t take me out of context here, but segregating people is often the best thing companies can do. What do I mean? Imagine if they had baby-free flights. Who wouldn’t buy a ticket for a flight if you knew there wouldn’t be a baby crying behind you? Now let’s imagine we had movie screens where all the teenagers went so they can text the entire time. It’s perfect. You get their bitchasses out of the theater so you are never in jeopardy of a light being shined in your face. Anyone who doesn’t see how great of an idea texting-friendly theaters are don’t see the bigger picture.

You see, times, they are a-changing. As a blogger, I have a hard time staying off my phone, ever. What if something big happens and I miss it because I wasn’t checking Twitter? Portnoy has us all so conditioned to always be on top of everything that going to a 2 hour movie is one of the most nerve-wracking experiences we can go through. I have to check my phone out of pure paranoia just to make sure something huge didn’t go down.

It’s such a double edged sword for me. On one hand, a movie is an escape. It really is the time everyone should put down their phones and just escape reality. On the other hand, AMC would be doing a service to everyone who needs or desires to stay in touch with the outside world during a movie. When I’m watching a movie at home I have my phone in my hand, it’s not the worst thing to have that convenience at the theater, just in case.

When it comes down to it though, I would always pick the non-texting screen. I would challenge myself to overcome my phone addiction so I don’t end up in a theater with horse shit 17 year olds who won’t shut the fuck up. I think text-friendly theaters are a win for everyone.