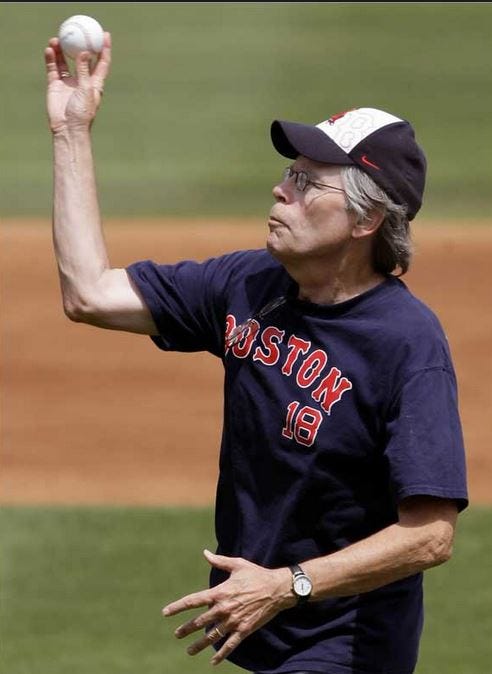 “There are questions inherent in the decision to net, and I think they’re bigger than baseball. Like when does protection become overprotection? Is the safety of a fan at a public event like a baseball game the responsibility of the organization putting on that event? (According to the back of every MLB ticket sold, the fan is responsible.) When do safety precautions begin to steal away the pure joy of being there?

“I understand the Red Sox bear some responsibility, but I also accept my responsibility to take care of myself — to the best of my ability — when I’m at the ballpark. Is there a certain element of risk? Yes. Is the risk perhaps increased by being only two rows from the playing field? Yes again. But you can see everything from that vantage, not just the players but the breathtaking green of the grass, the bright white of the uniforms, the sky as it goes from blue in the top of the first to black by the bottom of the sixth. And hey, there’s always the chance that you can catch a foul ball instead of being hit by one. That chance goes away once the net is in place. In fact, a lot goes away. That netting may be a fine mesh, but you’re still looking through a barrier instead of right at the thing you came to see. Which means you’d do almost as well to sit home watching the game on TV.

“… Also, there’s something almost ludicrous about wrapping America’s baseball stadiums in protective gauze when any idiot with a grudge can buy a gun and shoot a bunch of people. I’d much rather see some action taken on that little problem.

“I’ll still be at Fenway Park every chance I get, and I guess I’ll keep my dugout seats — which are remarkably expensive real estate, given how poorly the Sox have played the last couple of years — but I feel terrible about the netting. It’s one more step toward taking the taste and texture out of the game I care for above all others. The bottom line? That net feels like paying good money to sit in a cage.”

I fucking love Stephen King. He is legit my favorite famous Red Sox fan. He’ be the first guy I’d choose to sit with during a game. It’s not about being seen for him. It’s not about getting his name in the inside track. It’s not about making sure everybody knows he’s from Boston. Stephen King isn’t a guy who shows up once a year or waits till the playoffs. He just comes quietly, enjoys the game, and roots for the Sox and goes home. Now he is legit pissed that the Red Sox put up additional netting in his face and he should be. Everything he said in his letter is dead on. Accidents happen. That’s life. You can get hit with a broken bat just as easily as hit by a car crossing the street on the way to the game. Pretty soon you’ll have to watch games on closed circuit TV so nobody can get hurt. It’s a joke. Also love how he took a quick dig at the Sox for sucking the last 2 years.

PS – Was this a fake Stephen King letter published by the Globe? Tough to tell know that they’ve gone Onion on people’s face.