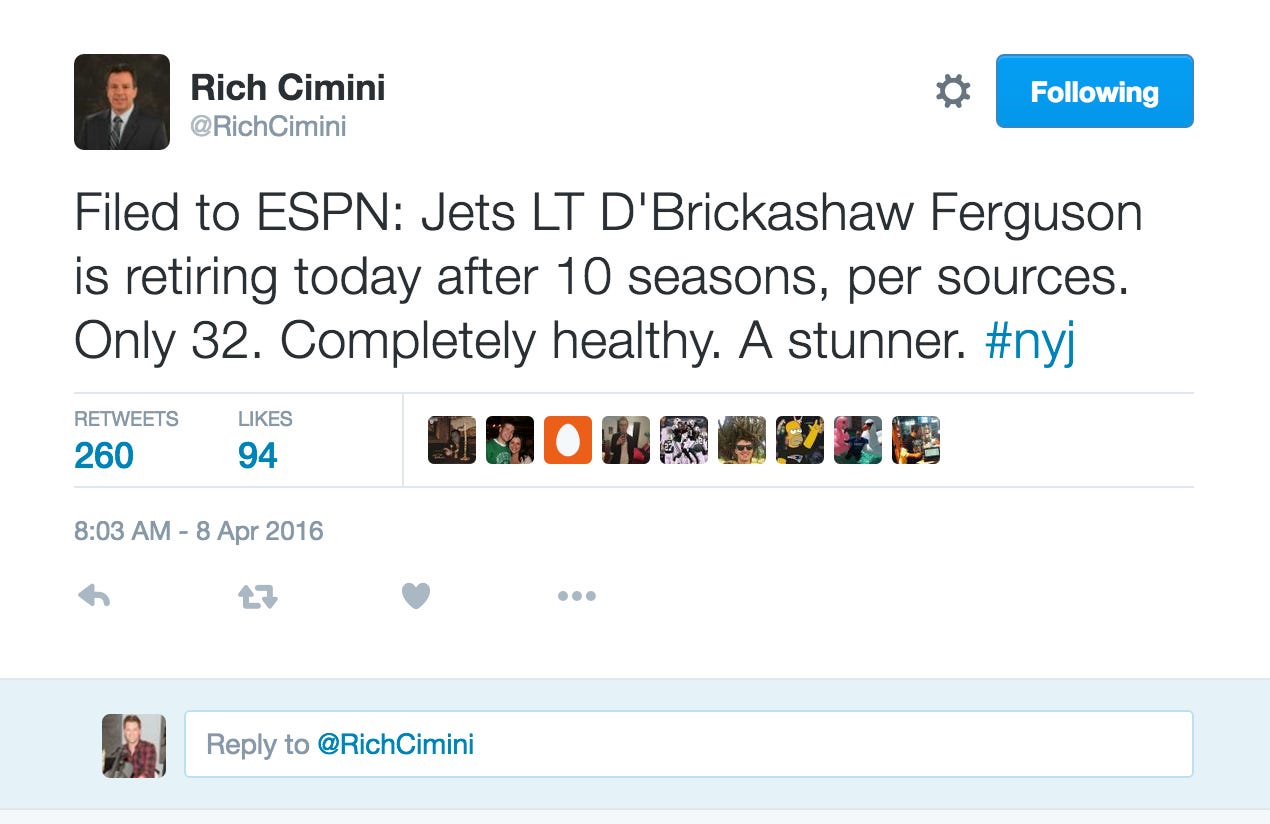 Wait…WHAT? An absolute shocker right here. Now when you start to put the pieces of the puzzle together, it makes a little more sense. When the movie Concussion first came out, D’Brick wrote a piece for SI in which the main highlight was “After learning all of this, I feel a bit betrayed by the people or committees put in place by the league who did not have my best interests at heart.” Then you factor in the Jets asking him to take a pay cut this offseason and I can see where this is a dude who just said “Not worth it. I’m done.”

But still its bizarre. Hes 32 years old and perfectly healthy. In his 10 year career the Jets have run 10,708 snaps, and D’Brick was on the field for 10,707 of them. And the one he missed was because the offense was running a trick play. Never missed one due to injury or otherwise. Absolutely astounding. There’s no doubt in anybody’s mind that he’s still got a lot good football left in him. But I guess this is the new NFL. Where guys just want decide to walk away while they physically can still walk away. He made his money, he played incredible football, he’ll be in the Ring of Honor, and he wants to call it a day with his brain intact. As a fan it sucks to lose one of the pillars of this team for the past decade, but as a person you can understand where its coming from.

I guess the bright side here is he frees up about $9 mil in cap space. They can use this money on Fitz or Mo Wilk. Obviously its kind of robbing Peter to pay Paul if you bring your QB in at the expense of your Left Tackle. Sure you have a little more money to play around with but now you’ve got a 3rd question mark to deal with. As much as I tip my cap to D’Brick, you wish maybe he could have thrown this news out earlier in the offseason. Cimini said that the pay cut wasnt the deciding factor, but coming this late in the offseason I feel like it had to play into it. If he wanted to retire I think he would have made that clear immediately, leaving the team time to fill that void. Coming out of left field today makes me think the pay cut at least factored in to his decision here. I know asking veterans to take pay cuts is the way the business works, and I know D’Brick made loot, but I still think it was bullshit asking that guy to take a cut for Fitz. The fact that this dude was the one who was chosen to take the brunt of the Jets cap issues just aint right. Thats the last guy on the team that should have to sacrifice for them.

Hopefully the team was a little more prepared for this than the fans were. A lot of work to be done now. Lets see what ya got, Mikey Mac.