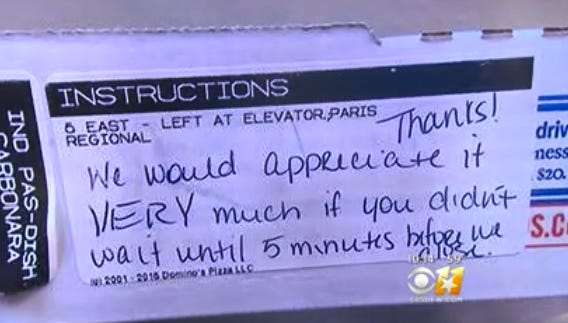 First things first- if I saw that note on my pizza box I would throw the entire thing into the trash immediately. If the workers making 7 dollars an hour at Dominos care enough to write that note on the box, who knows what is in the actual pizza. I’ve spent enough time on the internet to know pizzas get dropped on the ground, pissed on, wiped with, you name it. So I think that note is the least of the problems here. But you would think Dominos declared war on hospitals based on the reaction:

CBS - A nurse is outraged after he made a late-night pizza order and received a hand-written message on the box many feel is rude and insensitive.  “It was the rudest thing I’ve ever seen,” said Kerry Miller, who’s friend is a nurse in Paris.  “I don’t care if they called one minute ‘til, the business is still open. Service your customers,” said Miller. What angers Miller is that nurses save lives every day no matter the time, the holiday or the weather. “How would you feel if you wrote something like that and then the next day you were laying there?” questioned Miller. The nurse who placed the order was not available to speak, but Miller was happy to do the talking for him. “I want to see an apology to that hospital. I don’t care if they have to bring a pizza to every floor, those nurses deserve something better,” said Miller.

I get that note was a bit uncalled for. I probably would even consider writing a sternly-worded letter if that happened to me and get some free pizza out of it. But the fact there are articles on CBS about this is what baffles my brain. How does that little note get this far? The answer: Kerry Miller. The pizza wasn’t even delivered to Kerry Miller. She is just OUTRAGED so much by it that she went to the press about some GED ass motherfucker working at Dominos who wrote a note on a pizza box. Imagine giving interviews to the press over a note on a pizza box that ISN’T EVEN YOURS. That’s more outrageous than the note times a million. But unfortunately for Kerry Miller, she lacks all credibility. How? This quote:

What angers Miller is that nurses save lives every day no matter the time, the holiday or the weather.

Not for nothing Kerry Miller, but if I had to name a profession that is there for me no matter what, I’d say the pizza man. Just lugging around their 1997 Honda Civics, getting me my pizza piping hot to my door, rain or shine. I’m not taking anything away from nurses, they do a fine and dandy job as well, but hey Kerry Miller, you best not come after the pizza delivery man like that.

And plus, come on, are we really comparing what nurses do to what Dominos delivery people do? Everyone does expect more from nurses than pizzamen because they are nurses, not pizza delivery men. If you could smoke weed, play video games, and then still be a nurse, the people delivering your pizza at 11:59pm would be nurses too. So maybe lower your expectations on what you expect from your neighborhood chain delivery pizza place.