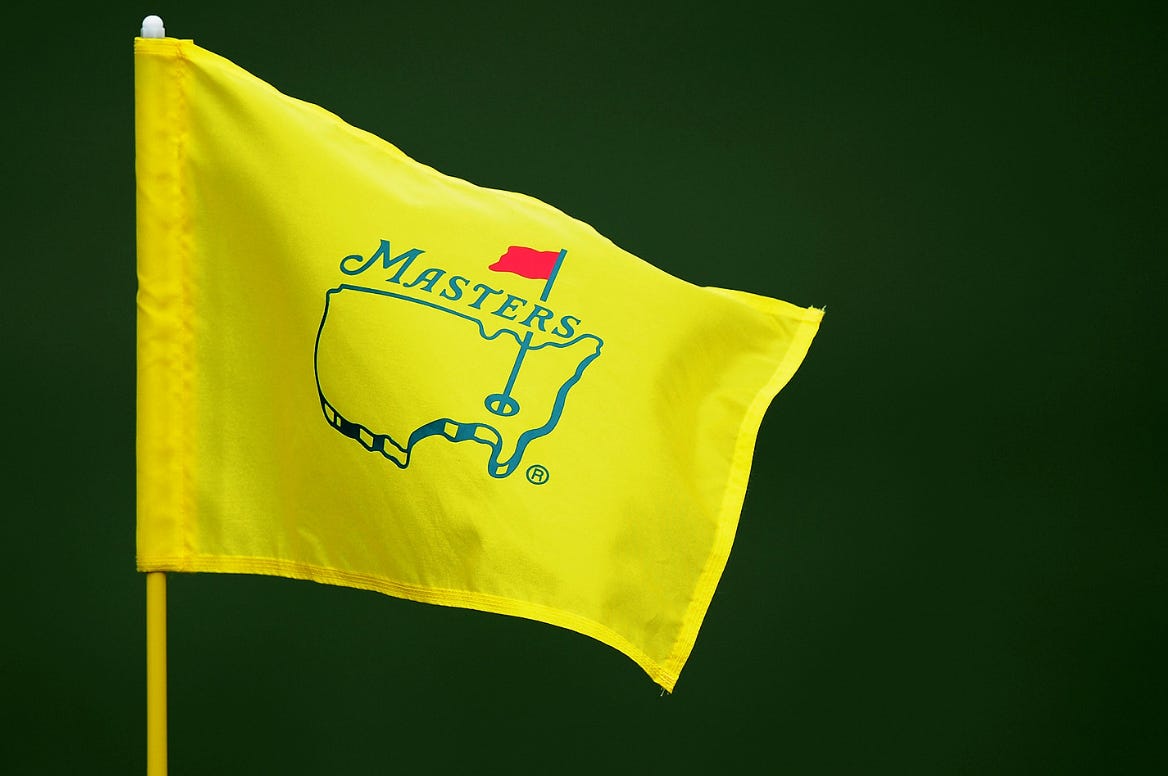 You can find all of Thursday’s tee times here

The folks running Augusta are somewhat coming out of the Stone Age and providing a streaming service at Masters.com. I haven’t seen any listing as to what the Featured Groups will be but this will be a solid option at work. There is a Master app but I’m not sure if you’ll be able to stream it through the app. It wouldn’t hurt to try.

Hello friends! IT’S HERE! IT’S FINALLY HERE! The greatest golf tournament of the year. It’s the mother fucking Masters. Every golf fan’s favorite tournament and every casual fan’s favorite tournament. That’s what really makes it awesome. EVERYBODY is in on the Masters. Well, that, and Augusta National. The golf course is always the real star of the weekend. Magnolia Lane, the azaleas, the music. Even the damn pimento cheese sandwiches are part of the majesty. If you love golf and you love Jim Nantz talking about how great golf at Augusta is then you love the Masters.

So what’s the storyline gonna be this year without Tiger Woods in the mix? Well that’s an ironic question because the storyline will be all of the storylines of the guys who could potentially win. It’s a field of 89 players but IMHO there’s only a handful of guys who can win it. Jason Day, Rory, Spieth, Rickie, Adam Scott and Bubba. Probably throw Mickelson in there too. I would put those guys in the top tier this weekend. Pretty obvious list but it’s true. And it’s the storylines of those guys that will make the weekend interesting. If Jason Day wins, it’ll be his second major championship win in a row and will solidify his #1 world ranking. If Rory wins, he completes the career grand slam and his 5th major championship. If Spieth wins, he successfully defends his Masters title after burning Augusta to the ground a year ago. If Rickie wins, he get his first major championship win and people stop asking, “Will he finally win one?” despite being only 27. If Bubba wins, I cut my wrists down the river. It’s those hypotheticals that I think carry us through the weekend.

Although, there is talk of the weather not being great for the first two rounds. Talk of rain and lots of wind Thursday and Friday. That could throw everything I just said out the window. With crazy weather comes crazy unpredictable results and scores. When Zach Johnson (Cedar Rapids stand up!) won the green jacket back in 2007 the conditions were RIDICULOUS. Windy and cold. I think the average score that week was like 76. It won’t be like that this weekend but, again IMHO, the only thing that stops a Rory/Spieth/Day/Rickie/Bubba/Scott/Phil from winning is tough weather conditions the first two days that throws scores for a loop. That happens and I think a whole different crop of players like Louis Oosthuizen, Dustin Johnson and Henrik Stenson emerge as contenders.

One last thing. Let’s talk about Bryson DeChambeau for a second. As weird as it sounds, Bryson might be the most talked about player as we head towards Thursday’s opening round. He’s the 2015 US Amateur Champion from SMU who is………..let’s say quirky. He is a genius by all accounts. A physics major. People cal him the Mad Scientist. All his wedges are the same length and he approaches the game wayyyyyyyyy differently than anybody maybe ever. And it has worked up to this point. I can’t totally decide if DeChambeau is a hardo loser who thinks he’s smarter than everybody else or a prodigy. This Masters appearance will be a huge test. If he does well, it’ll go a long way in convincing people that all of this smarty pants talk is the real deal. If he flops, people will write him off as a fad. My feeling on him right now is that I can’t get a read on him and I’m scared of things I don’t understand so I don’t like him.

I am not a gambler. I’ve tried and tried and tried but it just doesn’t grab me like it grabs other people. If my brain wanted me to be a degenerate gambler, I’d be one. Just doesn’t stick. However, I’m gonna post the odds for Masters winners so you can see them (from vegas insider).

If I were to say anything here, I’d say that Louis Oosthuizen looks pretty damn good at 28/1. He would by my sleeper. That’s all I got.

My Pick To Win: Rory McIlroy

This is it. It’s the Northern Irishman’s time to complete the career grand slam. It just is. I really liked how he played at the Dell match play event. His new Nike commercial gave me a golf boner you could see from the moon. Spieth puts the jacket on Rory.

Let’s end this with a prop bet. Because, while I may not be much of a gambler, I love prop bets. Who doesn’t? Here it is:

Since I have Rory taking home the green jacket, I’m going with Parent. If Rory does in fact win then parent is a stone cold lock. Sure, he has a fiancé, but he’s going straight for his Dad. No doubt about it. A guy doesn’t complete the career grand slam and then hug his significant other who he’s only known for a few years. You go straight for the big guy who taught you everything you know about the game. This is son’s moment with his Dad. Lock it up.