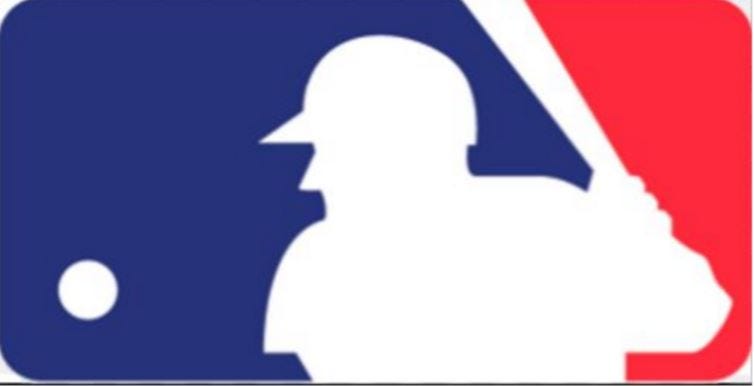 Check out my other fantasy baseball posts if you haven’t already (overvalued players posts (part 1 and part 2), my underrated stars, and offensive sleepers) the percentages in parentheses are the players’ ownership rates in ESPN leagues, and this post focuses on both roto and points leagues.

I mentioned that I thought Shelby Miller (178) and Raisel Iglesias (161) could be valuable mid-round pickups and I should also probably sing praises for Drew Smyly (136) who would probably be going much higher if he hadn’t been injured for most of last season. Smyly struck out 10.4 batters per 9 innings with a 3.11 ERA (and a 3.25 SiERA). Smyly’s success comes on the heels of a 3.24 ERA 2014 and a 2.37 ERA 2013 – he has yet to qualify for an ERA title (career high of 153 innings) but, on a per inning basis, he should be one of the best in the game. Justin Verlander is another guy that I’ve got my eye on this season. Verlander pitched like shit in 2014 and the first half of 2015 but, in his final 99.1 IP, he threw to a 2.27 ERA and K-ed nearly a batter an inning. Verlander (135) won’t be the Cy Young winner that he was in 2011 but he has legitimate potential to outperform his 14th round valuation in a 10 team league. Pitching, moreso than batting in my opinion, can yield you some real stars late in the draft so here are some guys that might end up being absolute bargains relative to where they’re currently being drafted.

Dodgers‘ Alex Wood, owned in 65% of leagues, was absolutely excellent in his rookie season of 2013, he was absolutely excellent in his sophomore season of 2014, and he struggled a bit last year. In 2013 and 2014, Wood K-ed 8.9 batters per 9 and earned a 3.13 ERA and 2.78 ERA respectively – those ERAs weren’t flukes either. Well I said he struggled last season, right? He still had a pretty acceptable 3.84 ERA and while the decline in Ks wasn’t great, I’m willing to bet on his resurgence. A recent fangraphs article will do Wood more justice than I ever will but the gist of it is that last season, his release point was lower than it had been earlier on in his career and this caused a decrease in effectiveness and velocity. Thus far this spring, Wood’s release pack is back to normal and his velocity has bounced up (don’t trust spring stats but you can trust spring mechanics changes). Wood had been a top 30 pitcher when healthy in 2013 and ’14 and I don’t see why that should be any different this year. 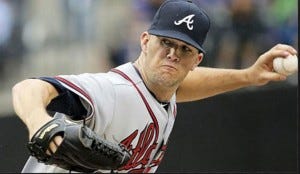 Pirates’ Pitching Coach Ray Searage has overseen the development and resurgence of guys like AJ Burnett, JA Happ (more on him later), Francisco Liriano, Edinson Volquez, and others. Juan Nicasio (16%) is the next name on the list. Nicasio has made some serious noise at spring training and while we typically don’t give a shit about spring training stats, I’d rather use the last pick of my draft on someone who absolutely lit it up during spring training than on someone like Tommy Milone. So why Nicasio? well aside from his 15 spring innings (allowing no runs), 24 strikeouts, and just 5 walks, Nicasio is also capable of throwing in the mid-90s and is finally taking advantage of a starting job outside of Coors Field. Nicasio will struggle with his walks but his strikeout upside and his overall upside in Pittsburgh makes him an encouraging pick at the end of your draft.

Taijuan Walker (68%), Carlos Rodon (53%), and Lance McCullers (64%) are three guys with pretty similar write-ups. All three of these guys absolutely ooze potential and I wouldn’t be surprised at all if any of them become perennial all stars. Mariners’ Walker proved that he has the ability to dominate for stretches but his inconsistency was baffling last year. I’d regard Walker as purely an upside play but I would definitely be willing to bet on an athlete like him. White Sox lefty Carlos Rodon is an ace-in-waiting but he will have to cut down his walks. Much like Walker, Rodon was pretty inconsistent all year and even in his excellent final 8 starts (1.81 ERA), he still managed to walk 3.5 batters per 9 innings (he averaged 4.6 over the course of the season) – lots of walks are weaknesses I’m willing to risk at pick 220 if I have the opportunity to net an all-star caliber arm. Lance McCullers Jr. is a lot different from the other two arms on this high upside list because he actually performed last season. The biggest knock against McCullers prior to the season was that he could not hold up as a starter long-term and, while he might not ever be a 200+ inning workhorse, he should be an effective starter when he takes the mound. McCullers had a 3.22 ERA last year but that number dips all the way down to 2.80 if you take out a .1 inning stinker against the Rangers. McCullers will start the season on the disabled list but that’s a small price to pay for his production (it is also worth noting that his career high in innings is 125.2 so he may have been capped around 160-170 innings regardless). 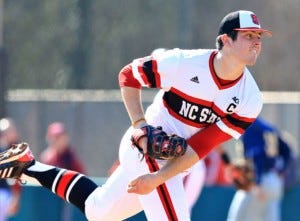 Nationals’ Joe Ross (49%), Red Sox‘ Eduardo Rodriguez (30%), Kevin Gausman (74%), and Aaron Nola (36%) all fall into similar categories as the guys listed above. Joe Ross was absolutely lights out at points last season and should improve on his rookie 2015. Ross has a simply dastardly slider and a pretty solid sinker – this guy has the potential to crack the top 25 pitchers if all goes well. Eduardo Rodriguez, meanwhile, had a 3.85 ERA in 21 starts last year but that number dips all the way down to 1.86 if you remove his 4 worst outings. Rodriguez is likely out until May so only draft him if your league has available DL slots (and even then, exercise caution) but he is a guy to look out for in deeper leagues. Baltimore has screwed with Kevin Gausman’s development for years now and its at the point where I am not totally sure what to expect. Gausman will miss his first couple starts of the season due to injury but it doesn’t sound as serious as Rodriguez’s and I’d expect Gausman to be the Orioles’ top pitcher upon his return (though that isn’t saying much). The Phillies are still a complete mess so I wouldn’t trust Aaron Nola for much in the wins category and Nola probably doesn’t have the upside of some of the other young pitchers but he should be a solid bet for 7ish Ks per 9 and a mid-3s ERA.

Cincinnati righty Anthony DeSclafani (29%) was pretty unlucky last season but did manage to K 8.4 batters per 9 innings while walking just 1.6. DeSclafani also had a 3.25 Fielding Independent Pitching and a 3.33 xFIP in his final 13 outings. Much like Nola, DeSclafani won’t be a reliable source of wins but he should put together some cheap value in the other categories.

Red Sox’ Rick Porcello had an atrocious 1st half of 2015 with his new team but he quietly transformed back into the Porcello of old after July 1st. A 3.49 ERA, 8.6 K/9 and just 1.86 walks in 9 innings is definitely worth of being owned in more than 11% of leagues. If you’re looking for another 2nd half success story, look no further than current Blue Jay JA Happ. The 33 year old lefty rounded out his season with a tiny 1.37 ERA (and a 2.22 FIP and 2.91 xFIP) and 9.6 ks per 9. Now, I don’t think that Happ has suddenly turned into Jake Arrieta but I don’t see any reason why he can’t be a reliable starting pitcher for you and considering he’s available in 92% of leagues, you could probably get him for cheap. Robbie Ray (5%), the Diamondbacks’ 5th starter is an excellent source of strikeouts – he’s got 8.4/9 and he won’t kill you in ERA (mid 3s), the DBacks offense should continue to produce so hopefully Ray gets a bit luckier with his Win/Loss record in 2016. 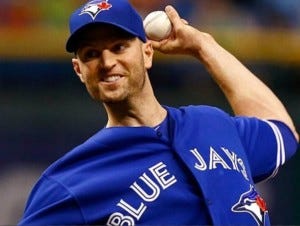 JA Happ Smiling and Having a Good Time, Probably

To go rapid fire, TB’s Erasmo Ramirez (10%) had a 3.02 ERA if you take out his first two outings of the season – that would’ve been good for 4th in the AL. Wade Miley (14%) is a good source of innings which could be valuable in points leagues and he’s now pitching half his games in the Mariners’ pitcher friendly Safeco. Marlins’ Adam Conley (8%) and Padres Colin Rea (.9%) are each cheap, young pitchers with very favorable home ballparks. Phillies’ Jerad Eickhoff (5%) doesn’t have any real plus pitch but he did get the job done in 2015 (2.65 ERA and 8.6 k/9 in 51 innings) and the Blue Jays’ former top prospect Aaron Sanchez (15%) has a few flaws in his delivery but will also start the season in the big league rotation. Nationals’ Tanner Roark (9%) was the most effective 5th starter in the game back in 2013 and he’s got a spot in the rotation again.

Some pitching prospects to keep an eye on early in the season include Twins’ JO Berrios, Pirates’ Tyler Glasnow, A’s Sean Manaea, and Dodgers’ Jose De Leon. Finally, if your league has open DL spots, NYM Zack Wheeler (14%) and TB Alex Cobb (5%) could be difference makers in the home stretch.

In roto leagues, determining relief pitching sleepers is often impossible to predict – you just have to wait until a closer goes down due to ineffectiveness or injury and another guy takes over. For this reason, my #1 piece of advice for finding undervalued relievers is to just stay up to date on closer performances and injuries and to be ready to quickly snatch up any closing replacements. Tampa Bay’s Alex Colome (17%) will likely be filling in for injured closer Brad Boxberger, Andrew Bailey (31%) might be the Phillies’ closer, and Arodys Vizcaino (34%) is a very talented reliever and should be expected to take the mound for a majority of Braves save opportunities. I alsoi wouldn’t be surprised if Milwaukee’s Corey Knebel (2%) snatches a few saves away from Jeremy Jeffries. In terms of valuable non-closers, 4 come to mind: Tony Zych (.7%) of Seattle can K more than a batter an inning, has good control, and great stuff; Athletics Australian reliever Liam Hendriks (1.2%) has similar results to Zych and could save some games if Sean Doolittle sustains an injury; and Giants‘ Hunter Strickland (8%) can throw the ball fast and I’m always willing to put some trust into guys like that; finally, Keona Kela (8.3%) was very impressive in his rookie season and all signs indicate that he’ll continue that production for the Texas Rangers in 2016.
Follow @SAlaskaBarstool