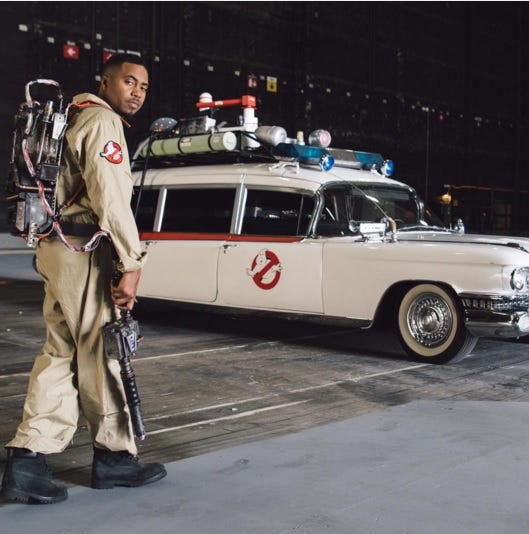 Rap Up- Who you gonna call? Fresh off the premiere of his new J Dilla collab, Nas and his clothing line HSTRY have collaborated with the Ghostbusters franchise on a limited collection. The hip-hop icon rocks the movie-inspired threads in front of the Ecto-1 at the Sony Pictures lot in Culver City, Calif. God’s Son, who cites Ghostbusters as one of his favorite childhood films, also gets decks out in full Ghostbusters gear including T-shirts, sweatshirts, jackets, and hats.

In a video promoting the campaign, Mr. Jones said he launched HSTRY “as something fun to do” and added that he “didn’t think much about the fashion industry.” However, he has been thinking about business. “These days, I’m definitely more business-minded because it’s that way now,” he explained. “Things are changing. The music industry is going through a drastic change on every level and every aspect of it. There’s new and interesting ways to do things. I like to be a part of that.” The collaboration is to promote the upcoming all-female reboot of Ghostbusters. The 3D film, starring Melissa McCarthy, Kristen Wiig, Leslie Jones, and Kate McKinnon, hits theaters July 15.

As a diehard fan of Ghostbusters and former wearer of hip hop clothes during my high school and college days, I want to believe in this fashion line. But I also have to admit that I think this is one of the most ridiculous ideas I have ever heard and it will likely be a complete flop. But there are two facts that I simply cannot get past:

1. Kanye West sells what is basically the Derelicte line of clothing from Zoolander and people go crazy for it. Granted Nas isn’t as big as Kanye and I’m sure he isn’t looking to move the same units or be seen as some fashion genius for throwing a logo on some wearable proton pack. In the grand scheme of things, this is probably a shot in the dark by HSTRY, with Sony gladly footing some of the bill since that disaster of a trailer did the movie no favors in the public’s eyes.

2. The hip hop community once embraced NASCAR jackets with open arms, which had to be the all-time weirdest fashion collaboration. Nothing like seeing tons of people in the hood rocking that M&Ms racing jacket. Black people were probably just fed up of white people stealing their shit, so they pulled an okie doke by going with the NASCAR jackets. So I’m not willing to call this Ghostbuster collection a flop yet. But making a long brown exterminator outfit fashionable would be the most impressive thing Nas has done since Illmatic.

Also, I need a hot Nas song to drop using the original Ghostbusters song when the clothes get released.

Another one using the criminally underrated Ghostbusters 2 Bobby Brown song.

And if Nas has time, a third using song that made the Statue of Liberty dance as the beat. Jackie Wilson never sounded better.

Actually, an entire Ghostbusters-themed Nas album would probably end up being my second favorite Nas album ever and it would bump Nas back up to a one hot album every 10 year average.