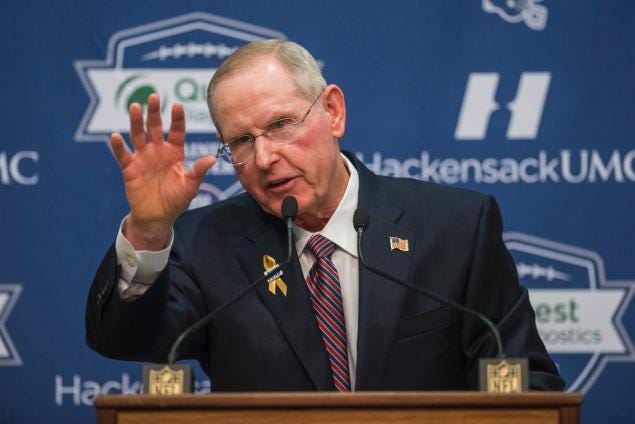 NYDN- There will be no great reunion between Tom Coughlin and the Giants, no ascension of Coughlin into the Big Blue front office. Practice facility gym privileges notwithstanding, Coughlin is officially moving on. And he made that clear on Wednesday, during his appearance at the Mike and the Mad Dog reunion show in Radio City Music Hall. “I don’t think so,” Coughlin said, when asked about his future with the team. “There’s not been a lot of discussion about that. I really don’t know how, once the decision was made . . . Move on, is what I think I’m saying.”

Not that Coughlin is done with the NFL. When asked if he could still run a team, he answered quickly. “Oh, I know I can coach,” he said. Still, Coughlin, 69, finally seemed ready to close the chapter on his 12-year tenure with the Giants, a run that saw him lead the club to two improbable Super Bowls and emerge as one of the most beloved figures in franchise history. It was in part because of this that, when Coughlin stepped down in early January, team owner John Mara suggested that the club would welcome him back in a front office capacity. And for months, that seemed like a possibility, if only a longshot. Coughlin had spoken of staying around the NFL, after all, and while he spoke of coaching again and even interviewed for the Philadelphia Eagles job, he lingered around the Giants’ practice facility, frequenting the team’s gym. By all accounts, he seemed on good terms with the franchise. And Mara never closed the door on a Coughlin return, either. And then Coughlin slammed that door shut on Wednesday, finally completely ruling out a return, and finally delivering some round criticism to his old franchise (and GM Jerry Reese) for never giving him the ammunition needed to chase a playoff berth in his final four years with the Giants.

I included the video from last night’s Mike And The Mad Dog show in this blog for anyone who missed the interview, but the big story was Coughlin saying he will not be involved with the Giants at all this season. If you watched/listened to the interview, Coughlin again kind of made it obvious that it was more of a force out than a resignation and even discussed how he was kind of disappointed the Giants weren’t able to spend on defense like they did this offseason while he was the coach the last few years.

Now I am torn about this. After watching the video tribute and interview, I was ready to fight every Mara, Tisch, and Reese on the planet because of Coughlin’s “resignation”. The guy really does just grip the room and you remember all the good times when they talk about the Super Bowl victories and whatnot. But I guess that type of personality could have been a problem for the current state of the Giants. I imagine the owners don’t want Coughlin and Reese to potentially have any friction and if Ben McAdoo has trouble dressing himself, I can’t imagine having a two-time Super Bowl winning coach that was unhappy the way things ended watching over his shoulder. I guess Coughlin’s time with the Giants is like the Sopranos. It’s over. It’s time to move on.

Anyway, check out the interview if you haven’t yet. It will make you happy as a fan, then angry, then sad, then I guess happy again. An emotional roller coaster, just like basically every Giants season under Tom Coughlin was.