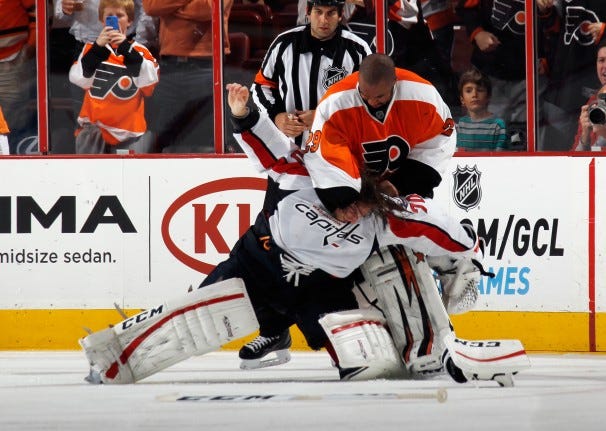 Courier Post – Think of him as a backup’s backup.

Ray Emery is back with the Flyers…sort of. If they need to use him, they’re in serious trouble. It will have meant that both Steve Mason and Anthony Stolarz are out of commission. The 33-year-old goalie who served as Mason’s backup last season signed a tryout with the Flyers Tuesday because they’ve lost Lehigh Valley Phantoms goalie Jason LaBarbera for the rest of the season, according to general manager Ron Hextall.

I don’t care if he never plays a single second for the Flyers this year. Actually, I’d much rather prefer that Ray Emery doesn’t even come close to touching the ice over the next 7 games. Keep all of your fingers and even your toes crossed that Mason can stay healthy down this stretch. But the fact alone that Razor Ray is back with this organization in any capacity just in time for tonight’s match up against the Caps is giving me all the confidence in the world. After Detroit’s loss last night to the Habs, the Flyers are now tied in points with Detroit (87) with TWO games in hand. The Red Wings could go 5-0 to close out the season and the Flyers could still get in to the playoffs by squeaking just 11 points out of their next 7 games. Which includes 1 more game head-to-head against Detroit a week from today. It’s looking more and more like the Pesky Flyers are going to be playing playoff hockey and that 1st round match up against the Caps would be an absolute fucking bloodbath.

The Caps are the best team in the NHL this year. That’s fine. I can admit that. They’ve got about as close to a complete team as you can get. They’re a little shaky defensively and I don’t think they have a true #1 defenseman. But they do have Holtby in between the pipes who should be your Vezina winner at the end of the season despite finding himself in a bit of a slump lately. But I love the way this Flyers team matches up against the Caps. Their top 6 doesn’t get a ton of respect outside of Philly but Sean Couturier has the ability to shut down any line he’s up against. The Schenn-Giroux-Simmonds line will physically beat the shit out of you and then stuff as many pucks in the back of the net as they’d like. Ghost bombs from the point on the powerplay will be enough to murder Holtby or at least break him down to a human level. And honestly, I’m more comfortable in the Mason/Neuvy combo than I would be with Holtby/Grubauer. If anything happens to Holtby, it’s game over. Simmonds can stuff Tom Wilson into a locker and Giroux will be able to formally take the torch from Mike Richards by knocking his former captain out of the playoffs.

Nobody expected the Flyers to be a playoff team in October. They’re playing with house money and they have nothing to lose at this point if they find themselves in the postseason. A team with nothing to lose is very dangerous. That playoff series will have blood, there will be guts, there will be big time goals and some big time hits. There will be glory and there will be some tears. If you’re in to any of that stuff, well then you’ve got a series preview tonight at 8 on NBCSN. Hey, Nate. BOO 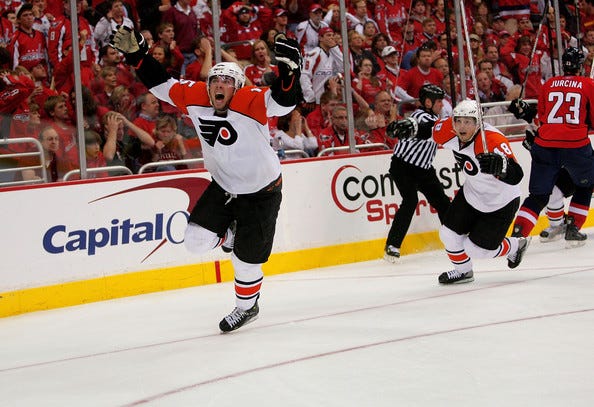