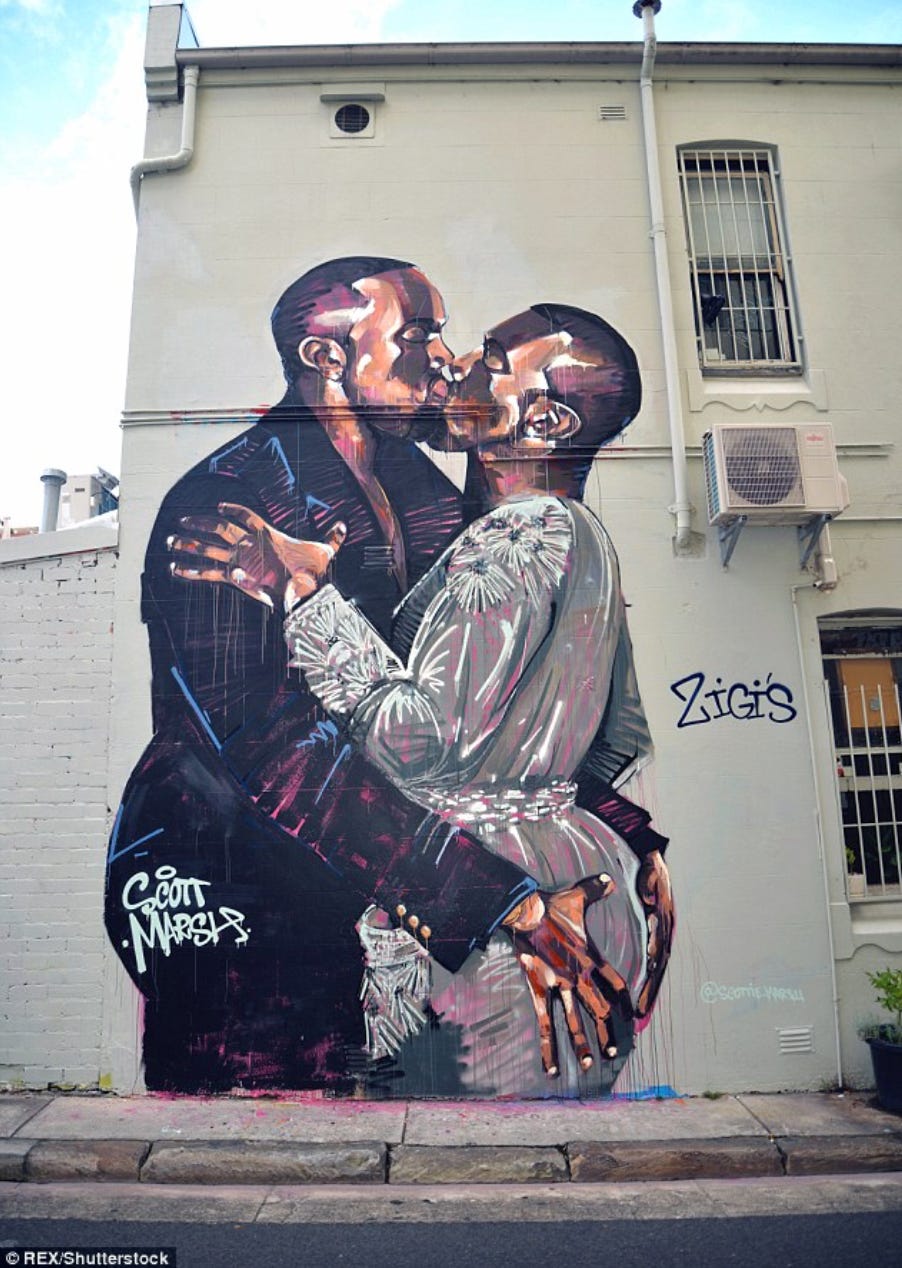 DailyMail- The artist who painted a huge mural of Kanye West kissing himself says he’ll remove the artwork, but only if the U.S. rapper buys a print of the image for $100,000 and gives him a lifetime supply of his signature model shoes. Australian artist Scott Marsh daubed the large image of Kanye embracing another Kanye on a building in Chippendale, Sydney, earlier in March, and it has attracted international attention. In the image, based on a meme of the same picture, in turn inspired by a photo of West kissing his wife, Kim Kardashian, one Kanye is clad in black, the other in a dress, buttocks being grasped, locked in a passionate kiss. It reflects ‘the love Kanye West has for himself’, the artist says. After it was painted, a member of someone who said they were from the rapper’s management offered to pay Marsh a ‘pretty decent chunk of money’ to paint over it, he told the ABC.

If Kanye is the icon superhuman he says he is, he won’t let this artist bully him around like this. If Kanye is as influential and God-like as he says he is, he will say on a song or in a tweet, “Yo somebody paint over that fucking mural of me kissing myself” and I guarantee somebody will step up in 15 minutes with a ladder and a bucket of paint and it’ll be gone. $100,000 and a lifetime supply of shoes? GTFOutta here dude. Ridiculous demand but I guess aim for the stars. To be totally honest I’m shocked that Kanye doesn’t love the mural. I’m shocked he hasn’t flown the artist to LA and paid him to paint the same mural on every wall in his house. Nothing encapsulates Kanye West better than that mural of him making out with himself. It’s perfect. Kanye for sure thinks about himself while he’s fucking Kim. And I thought Kanye wanted people to respect all artists? Now he wants to take down a fellow artist’s work? Can’t have it both ways fam. Either you love all art and you’re cool with a painting of you making out with you. Or you’re just like everybody else and we get to pick and choose what art is good and what art is bad.