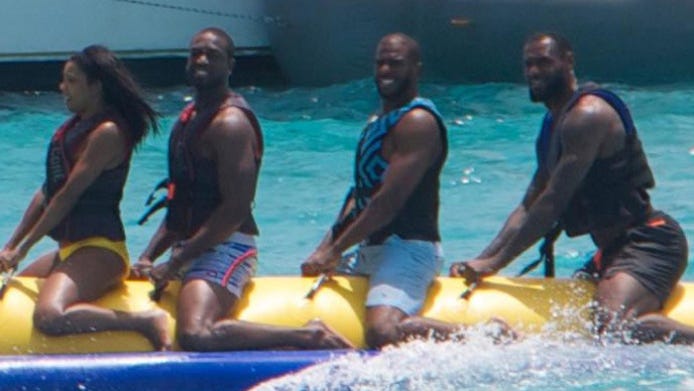 Taking a moment away from college basketball here to talk about international basketball and more importantly the US Olympic team. We had some major news yesterday with Chris Paul withdrawing his name from the Olympics due to wanting a break.

The big question heading into Olympics camp was whether the four best friends would all stay together for another run at Olympic gold. That group of course is LeBron James, Chris Paul, Carmelo Anthony and Dwayne Wade.

We all know LeBron James is LeBron James while Chris Paul is a top-3 point guard in the NBA still. The two biggest questions were Carmelo and D-Wade. First off, Melo is the best international player the US has ever had. His ability to play the stretch four in 2008 and 2012 showed just how skilled this guy is, no matter how much he gets killed in New York. In 2012 he set a US record against Nigeria by hitting 10 threes and scoring 37 points. Again, he’s the best international player we’ve seen for the USA when you look at the three Olympics Games he’s played in.

Now with Chris Paul pulling his name out it opened up two doors. First it opened up one for those three to pull their names out as well, something Melo said he’s not doing. In fact last night he came out and said he was excited for the Olympics so he knows what success feels like. As a Knicks fan that sentence fucking sucks, but it’s true. However, his other quotes made it seem like LeBron and DWade would be playing as well, giving them three spots on the team barring major injury.

The second part of no CP? It’s going to lead to an awesome battle for a point guard spot between Kyrie Irving, John Wall and Damian Lillard – the three guys often listed right after the top-3 point guards in the league. Kyrie was on the 2014 World Cup team and won MVP of that tournament while he’s clearly the third best out of that group, there’s no doubt he’s the one that has to be the favorite to make the team. Since he was at Duke it looked like Coach K bred him to be an Olympic player. The way the team is going to be set up he doesn’t have to be a pass-first point guard, allowing him to shoot and help spread the floor.

Now, luckily we’re the USA and we still have ridiculous players, but the Chris Paul news means it’s a second starter pulling their name out of the Olympcis. The other is Anthony Davis, who is missing the Olympics with an injury. Before that it looked like the starting five would be Chris Paul-Steph Curry-LeBron James-Kevin Durant-Anthony Davis. That team is alright, I’d say. So, what would it look like now?

Assuming DeMarcus Cousins is healthy, this is what I expect the starting five to look like: Russell Westbrook-Steph Curry-LeBron James-Kevin Durant-DeMarcus Cousins. I’m giving Cousins the edge over Drummond and Jordan due to the fact he can step out and hit jumpers, which is something vital in international play.

The seven-man bench I think K will decide on looks like: Kawhi Leonard, Klay Thompson, Draymond Green, Carmelo Anthony, James Harden, Dwayne Wade and Kyrie Irving. Sure it’s a small team for US standards but they can play long on the wing and down the stretch can have LeBron guard most big guys. I expect the late-game lineup adding Kawhi for Cousins, giving them a strong defender.

Battles to keep an eye on during camp is the Kyrie/Wall/Lillard battle, George/Draymond Green and Cousins/Jordan/Drummond.