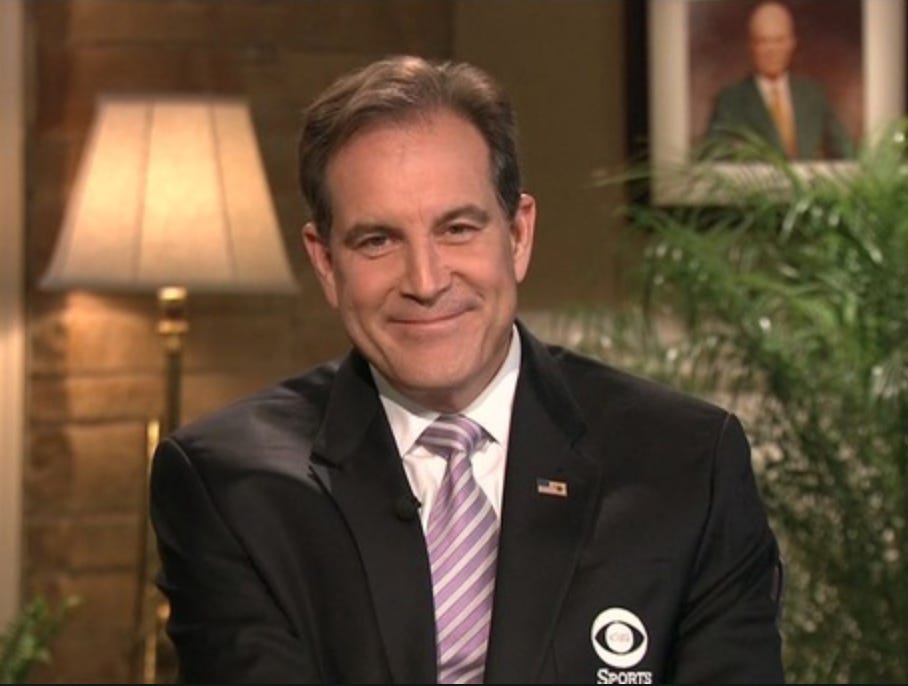 Golf Digest- On the other hand, there’s a little Jack Nicholson in “Five Easy Pieces” in me. I’m a breakfast guy: three eggs scrambled, with bacon and wheat toast, burnt. The problem is, it never came back burnt. For years it would arrive limp and tan, which brought breakfast to a standstill when I sent the toast back. It was costing me 10 minutes a day, which, multiplied by six days a week, is four hours a month. That’s 48 hours—two full days—per year. My friends, time is currency. My wife, Courtney, got tired of hearing me complain about it. She found a photograph on the Internet of a kitchen toaster ejecting two slices of burnt toast. She minimized it, printed it out and had it laminated. She insisted I put it in my wallet. When I order, I present the photo to my server. I get some strange looks, but I can assure you, the toast now arrives black and scary, just the way I like it.

So for the longest time I’ve been saying that Jim Nantz needs a camera crew that follows him around 24/7 during this time of year. The guy goes from calling the Final Four and then heads right down to Augusta to call the Masters. It would be one of the greatest sports mini-series/documentaries of all time. Just keep the cameras rolling the whole time and edit it down to all of the cool parts which would mean you wouldn’t have to edit it at all because it’d all be pure gold. Well now I REALLY want this to happen because apparently Nantz carries a picture of burnt toast in his wallet so cooks know exactly how he wants his toast. It’s stuff like that why we need cameras on him all the time. His life is interesting enough just by the nature of his job but we NEED video footage of Nantz handing a picture of burnt toast to a waitress. The interaction has to be surreal. His friends have to be like, “Oh here we go, Jimmy and his toast.” Also, I never ever want to read the words “limp and tan” next to each other ever again. Gross dude. Gross.