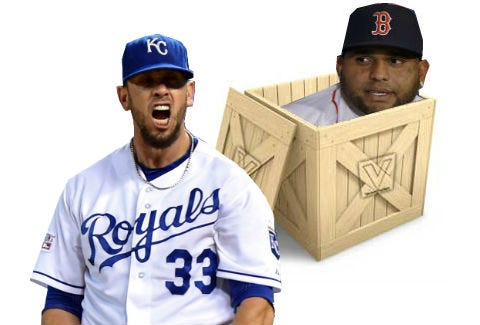 Rumors of a Pablo Sandoval for James Shields trade (presented by Waste Management. Waste Management: Moving your trash elsewhere since 1971) continue to swirl among reports of the Padres heavily scouting Boston’s most diabetic panda. Yesterday, Jared laid out the case for the move from both sides:

The concern for the Sox, as also mentioned yesterday, is that he’s coming into his age-34 season with three years and $65 million left on his contract. Also, he’s a fly ball pitcher who led the league in home runs allowed despite playing in one of the friendlier pitcher parks in Major League Baseball. And to top it off, his career-worst 3.6 walks per nine innings was high enough to offset his career-best 9.6 strikeouts per nine innings and drag his strikeout per walk ratio down to yet another career-worst of 2.67.

Looking just the slightest bit closer, though, the reason for Shields’ struggles in 2015 is pretty obvious and it lies in his lefty/righty splits:

Against lefties, on the other hand (get it?), Shields was a total disaster last season. The confusing thing is that Shields’ career splits are nearly identical against lefties and righties: his lefty line is .253/.308/.413 with 3.07 strikeouts per walk. If we’re looking for a 2015 lefty split comparison for Shields, we can look at Rick Porcello’s .289/.334/.481 line with 3.73 strikeouts per walk.Shields was actually fantastic against right-handed batters in 2015. His career splits against righties are .258/.305/.417 with 3.99 strikeouts per walk: he blew all those numbers out of the water. For comparison’s sake, 2015 AL Cy Young runner up and current Red Sox ace David Price had a .219/.267/.341 split with 4.48 strikouts per walk.

It’s pretty clear that we can drill down on the question from “what went wrong for Shields in 2015?” to “what went wrong against lefties in 2015?”. It’s easy to hypothesize that a loss in velocity as a pitcher gets into his mid-30s is the reason behind a decline, but, aside from the fact that that would presumably affect his numbers against lefties and righties something close to equally, Shields’ specific velocity numbers don’t quite bear that out: it’s true that his velocity on both hard and breaking pitches* were down versus 2012-2014, but they’re just about in line with the figures he posted the strongest season of his career in 2011, which included a 2.82 ERA, his lone All-Star appearance and a third-place finish for the AL Cy Young.

Solid velocity doesn’t mean that his fastball isn’t the problem, though. For his career, lefties bat .320 with a .581 slugging percentage against 4,005 Shields’ fourseams; in 2015, they hit .455 and slugged .909(!) against it. Considering how efficiently lefties destroyed his fastball, I’d actually consider Shields’ 2015 a roaring success overall. So what’s the issue with his fastball against lefties?

I say it’s mental. Despite what his velocity number says about his fastball still being harder in 2015 than it was in 2011, his average velocity dropped nearly one and a half miles per hour from where it sat in 2014. That can take a toll as a pitcher who knows he’s getting older and is trying to live up to a big contract for a team that had (extraordinarily misguided) playoff aspirations.

Beyond just my armchair psychology, however, Shields’ fastball location distribution goes a long way in illustrating my stance: in his career prior to 2015, 32.06% of Shields’ fastballs to left-handed hitters were either over the inside third of the plate or off the plate inside; in 2015, that number dropped to just 12.76%. He went inside just 12.76% of the time!

What’s more, his fourseam fastball, once the pitch used to set up a devastating changeup, took a backseat against lefties to his sinker: 21.09% of Shields’ pitches to left-handed batters were sinkers compared to 20.74% fourseams: that .983 fourseam to sinker ratio was below 1.10 for the first time in his career and under 2.35 for just the third time.

As a major league pitcher whose fastball still sits at 92 and whose velocity and movement numbers don’t show much year-over-year change that would indicate mechanical or injury-based issues, I can’t help but think the problem is in his head. Whether he’s worried he doesn’t throw hard enough anymore or if he thought he could be more effective stretching into his mid-30s by becoming a ground ball pitcher relying more heavily on sinkers, 2015 is a referendum that, at least against lefties, his strategy doesn’t work.

The upside is that if he can get over those issues, whatever exactly they are, he still has the raw ability to be a very effective pitcher. I hated Shields more than just about anyone when he was on the Rays, but I could say the same for a certain Cy Young award winner who will be taking the ball for the Sox on Opening Day. Shields is obviously a bigger risk than Price talent-wise, but I’d prefer to gamble on him having something left in the tank than the reemergence of a 29-year-old, slap-hitting, weight clause-less, 290-pound third baseman who’s under contract through 2020.