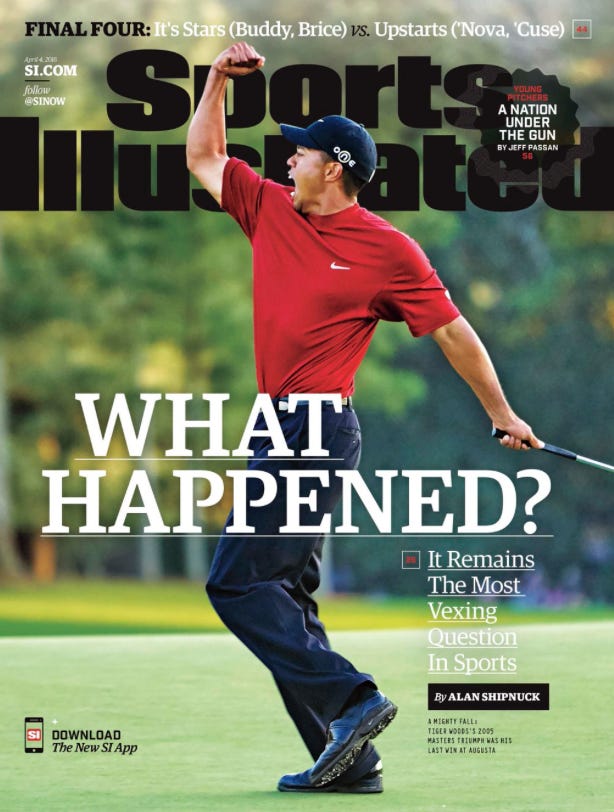 Well that’s a punch in the gut I wasn’t expecting. Why? Why did they do that? We’re a week out from the Masters, it’s a totally open field this year, Jason Day is coming of back to back wins, everybody is in good spirits and Sports Illustrated drops that on us. Questioning what the hell happened to Tiger Woods. For shame. I guess it goes to show just how relevant Tiger is even when he hasn’t played in like 8 months. Although, I’m not ruling out the possibility of him just showing up to the par-3 contest next Wednesday outta the blue and then teeing off on Thursday with the rest of the guys. Call me the fan boy that I am but I could see it happening. Deep down I’m hoping that cover made him say, “Fuck it. I’m showing up at Augusta.” The biggest piece of evidence I have that he’s gonna show up at Augusta is that he hasn’t said he isn’t showing up at Augusta. Pretty much a lock.

*There’s a 4000% chance Elin and Tiger get back together at some point. Maybe not today. Maybe not tomorrow. Maybe not within the next 5 years but it’s gonna happen. I would bet my life on it.