Washington Post – Hank Steuver – Sometimes the most withering criticism of a TV show is to say nothing at all — to withhold even a passing mention, even as the person at the center of it screams “Look at me! Look at me!” over and over. During the first year of his ultra-annoying stint as host of CBS’s “Late Late Show,” it seemed the most effective response to James Corden was to pretend there was no such thing as James Corden.

But it’s not that easy. If ever there was a louder, needier, more obnoxiously pathetic host in the American late-night genre, then I’m glad to have missed it. And I could have gone on ignoring Corden except for the slow invasion of his “carpool karaoke” segments, seen and shared by tens of millions online, which on Tuesday night will get a prime-time replay on CBS (with fresh material).

“The Late Late Show Carpool Karaoke Primetime Special” can be viewed as a doubling-down by a network that keeps shoving Corden our way, like parents who summon their most irritating child downstairs to once more sing for the grown-ups (or torture them, as the case may be). It’s made a little worse by the child’s unfailing eagerness to show off.

Yet I can’t deny the fascinating horror contained in Corden’s karaoke rides, in which a pop star climbs into the passenger seat of the host’s Range Rover and, within minutes, is singing along with Corden to some of their greatest hits. Mariah Carey has done it, as have Elton John, Stevie Wonder, Chris Martin, the members of One Direction, Sia, Jennifer Hudson, Jason Derulo, Justin Bieber and, most popularly, Adele. (The Adele segment, which first aired in January, is nearing 90 million YouTube hits.)  And — most tragically, popular culture at its most ingratiating — they must climb into a car and act friendly while some damn fool drives them around town and murders their greatest songs at the top of his lungs. The stars have to pretend like it’s the most fun they’ve ever had. But that doesn’t mean the rest of us have to.

Hey Hank Steuver I have a question…do you like James Corden’s Karaoke Carpool? Your article was a little vague. I couldnt tell your feelings on the guy’s show. The fascinating horror of tragedy from the obnoxious, irritating fool left things a little unclear.

I mean what do you think happened here? Do you think James Corden kicked this guy’s dog? Do you think he killed his dog and ate it? Thats the only possible way a person could feel this strongly about a late night TV segment. First of all, he’s dead ass wrong. James Corden A) has the voice of an angel, 2) is way better than the other Late Night hosts, and D) the signers love doing Carpool Karaoke. The first time around Biebs was standoffish. Carrie Underwood sucked but thats because that girl has the personality of a wooden picnic table. But the second time around with Biebs, One Direction, and Adele all fucking loved it. They have a blast. Because its a genius segment. Everyone loves singing in the car. And you get all the musical acts singing different types of songs, like Adele rapping Monster or Biebs singing Ironic. Honestly this is just about the last segment on TV you should be criticizing. It cross cultural boundaries. Everyone likes it. Young, old, guy, girl. Everyone gets a kick out of it. Hating on Corden and the Carpool is insane.

And yet, deep down, I respect this guy. 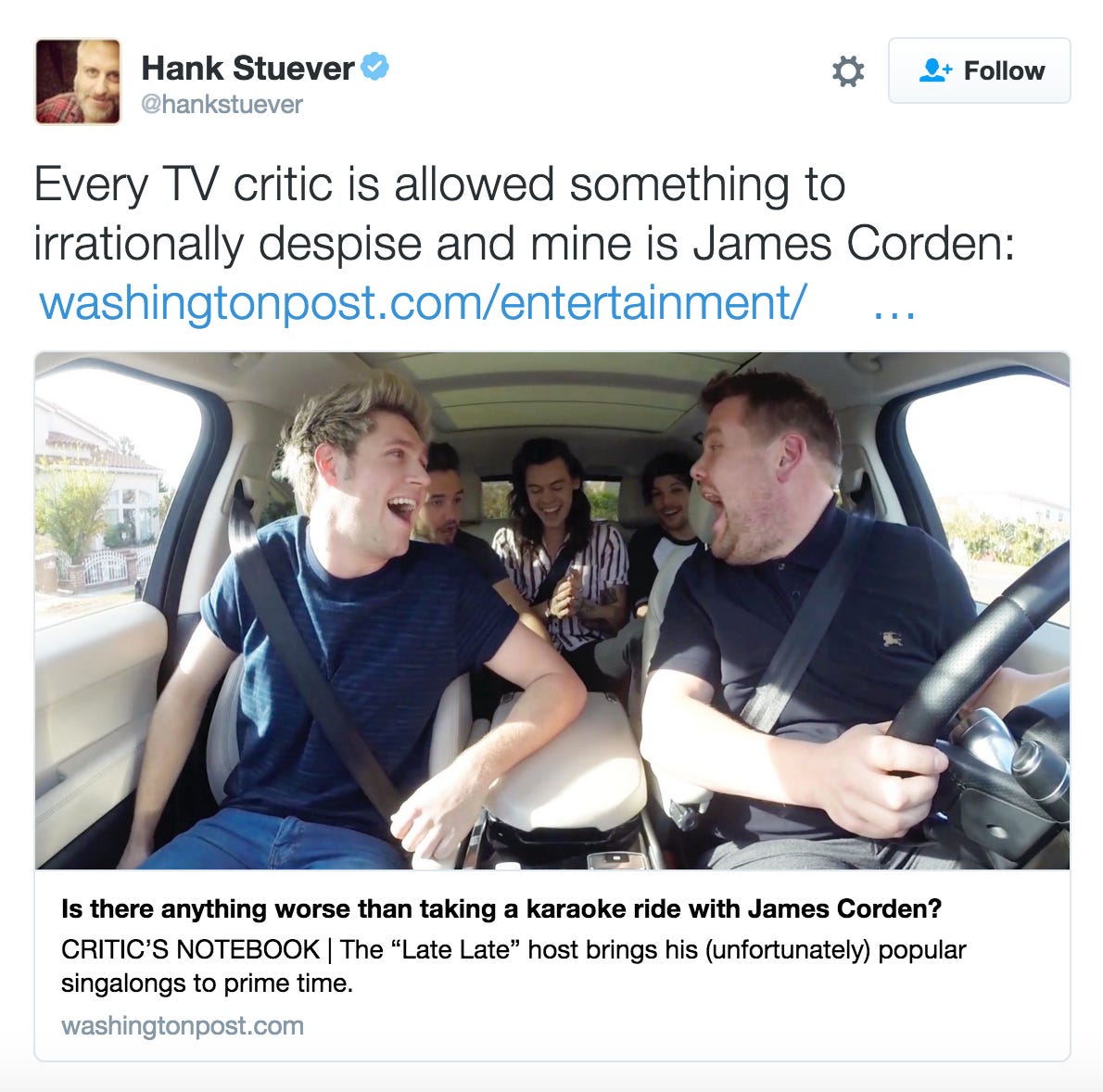 Sometimes you just fucking hate something. And if you got hate in your heart, you gotta let it out. Personally I think he went a little overboard but thats the point of hate. To each his own, I guess. I just pity anyone who isnt excited for the Carpool Karaoke special tonight. I pity anyone who doesnt find this entertaining: