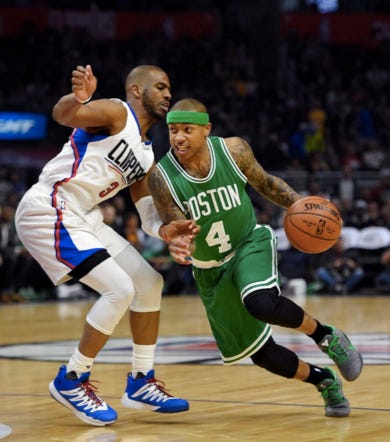 Yikes. The Celtics don’t get blown out often, so this was a little weird. Certainly it was unrealistic to think the Celts were going to sweep the season series against the Clippers, but damn. It’s like Doc always says, it’s a make or miss league. Clippers couldn’t miss, Celts couldn’t make. At the same time, I think we are all on the same page here. LAC and GS are the two games on this trip where the Celts simply don’t have the complete talent to match up. Did I think they’d get blown out? No, but I’m not freaking out over a loss to the Clippers. It’s not as if the Celts were favored in this game.

In fact, this game was decided pretty early if history has taught us anything

For perspective, two years ago the in that situation?

I’m just a blogger, but even I know you can’t come out flat against and elite NBA team on the road and expect to win. I said it on Sunday if the Celts play like they did in PHX they’d get blown out. Well, there ya go. Much like the loss to OKC there’s no reason to panic after a game like this. It’s important to be self aware. The Celtics are not on the same level of the Clippers, even without Blake Griffin. That’s OK. Does this man looked panicked?

This is the best part of Brad Stevens. Guy is the definition of steady. Doesn’t show one ounce of emotion one way or the other, he’s a robot. He’s perfect.

So if you stayed up to watch this disaster, we struggle today together, if you didn’t, fuck you, here’s what you missed

– Some might say there aren’t any positives to take away from a 24 point loss. I am not one of those people. The Celtics actually did a bunch of things well last night, and it started right away. There’s a reason I call Avery Bradley Mr Frist Quarter. For the season, Avery shoots a stellar 59.2% from the field and 40.8% from deep in the first quarter . This is important, because he’s responsible for 26.8%of the Celtics first quarter points, which leads the team (Isaiah 25.6%). So when this game started, we saw Brad’s first strategy. Get Avery going early.

Bradley had success early going inside/out, and at the time provided a nice little spark to open the game. First, the drive

Avery was actually 3-4 from three in this game, so it was nice to see him start to regain his form. But even though Avery was relatively quiet, it wasn’t for a lack of effort. He showed up on the defensive end too (3 steals) and this

– Yeah he’s 0 for his last 14 from three, but you know what, Marcus Smart played well again IMO. He led all bench players with 13 points on 6-12 shooting 5 rebounds and 4 assists which led the team. He’s everywhere, always. Are people going to be upset when Smart shoots 50% from the field? Because if that’s the case put a bullet in my brain.

His on ball defense is top shelf stuff. Doesn’t matter who it is, his ability to anticipate and hold his ground puts him in a position to make plays like this

Smart’s scrappiness on D leads to an easy Thomas 3: pic.twitter.com/MMnKZh7hZI

Offensively, we saw Smart have success when he used his size and established position under the basket. Numerous times he took Chris Paul to the block and handled him. Between that, and plays when he was aggressive towards the rim was how you want to see him play to get out of this slump

– Isaiah Thomas, Larry Bird. Let that sink in. The stat? Not really that important, but that’s not the point. Isaiah’s 24 points led all scorers, and he did it in typical Isaiah fashion. Blowing by people left and right, CP3/Rivers/Crawford whoever. Getting into the paint and living at the line (another 13 FTA), his tear continues. When looking at his night compared to CP3, I mean one guy’s team shot 1000% from the field, but both went 5-14, and Isaiah had 24 to Paul’s 13.

What’s crazy is that Isaiah will probably tell you he didn’t even play that well. That’s how good he is. And really if we are going to talk about Isaiah vs CP3, this cannot be ignored

This was actually the second time in as many games that Isaiah had a block from behind on a fast break. The one in PHX didn’t count, but for a defensive liability that sure looks pretty good.

But it wouldn’t be right if we left out the nasty step back that cut the lead to 11 late in the third quarter. You could tell as he blows by Rivers that he knows Jordan is waiting for him, so just like the game winner in Boston, Isaiah steps back for an unblockable jumper. Nasty play.

– You also have to appreciate the effort that the Celtics put on the offensive glass. A total of 18 offensive rebounds led by Sullinger’s 5, put them in position to crawl back into the game, they just couldn’t make a shot. With a player like Jordan dominating the paint, you don’t really expect that sort of production so not a bad surprise.

– Really really bad defense. Or was it? If you look at the score, you say yes, that was really bad defense. But when you take a little closer look, you see that the Clippers shot 58% on contested shots and 45% on uncontested attempts. That’s just some tough luck. Nothing more you can ask for than to contest shots, and if they are going to knock them down than so be it.

That being said, they gave up way too many points. Back to back 30 point quarters to start the game is just asking for a blowout.

– In looking for answers as to why the Celts seem to be struggling with their shooting, I have some theories. The Celtics are not a very good basketball team when they don’t run an offense, hold the ball and end up taking a long contested jumper. When they do that, they don’t share the ball, theres no ball movement, which increases the chances that things stall. Smart’s led the team the past two games with four assists for crying out loud.

So when a team shoots 40% on contested looks, and 37% on open looks, you need to move the ball to get easy baskets. Look at the quarter when the Celtics really struggled offensively. In the third quarter they shot 26%. Twenty six percent. There was no motion, no ball movement, just a bunch of standing around and poor shot selection. 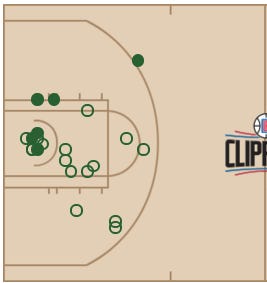 The Celtics are now 1-10 when they shoot under 40% (shot 34% lat night), and that’s frustrating. Just be average man and you’d almost never lose.

– Not Evan Turner’s best night. He really struggled from his sweet spot and it hurt the Celts because they really needed his offense. Off night, but something to keep an eye on

– Austin Rivers was a game high +21. That’s tough to swallow. The guy doubled his season average, and his play was a large reason why the Clippers were able to pull away. You cannot let Austin Rivers be the one who beats you. I get he’s had his moments, but the Celtics had no answer.

– You know it’s a weird night when DeAndre goes 5-7 from the FT line. At 42% that is some absolute bullshit.

– It was brought to my attention that last night’s refs Jason Phillips (Home wins: 42-12) and David Guthrie (Home wins: 38-17) seem to have a favorable tendency for a certain side. Nice of the NBA to reassure Doc he wouldn’t get swept by his old team.

– Both the no calls on Kelly Olynyk’s drive that he got hammered on, and then again on a Rivers hedge where he absolutely crushes Isaiah. Sometimes it’s the no calls that hurt you the most.

– The late third quarter fast break with Isaiah and Smart running a 2on1 break and Isaiah deciding to not throw a bounce pass and ruin the whole thing. Instead he decided to try and throw it over DeAndre Jordan, you know that 7 foot guy with like a 50 inch vertical. Might have been the worst fast break I’ve ever seen the Celtics run. Brad too.

IT just threw an alley-oop too high for Marcus Smart’s, and that led to Brad Stevens dropping his head and looking at his hands on sideline.

– It will be this way until the day he finally retires, but I simply will not accept Paul Pierce in a non Celtics uniform. It still hurts. If we’re being honest, it makes me envy the Lakers/Spurs/Mavericks who got to keep their superstar. Hate it.

– And finally, it just sucks to get blown out.

So now is the real challenge. POR has been and will remain the swing game for this trip. The Celts could very well sneak into Portland and steal this game. They’ve already beat them once. Of the LAC/POR/GS stretch this is clearly the one you have circled as the one you need to take in order for this trip to be a success. Atlanta is winning, Miami is beating the Nets, the Celtics need to keep pace until they can get to the final leg of their schedule and beat those guys head to head.

Remember, they were not going undefeated on this road trip. Losing to the Clippers doesn’t change much, forget about it and turn the page. 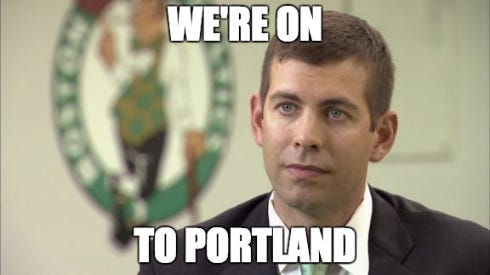