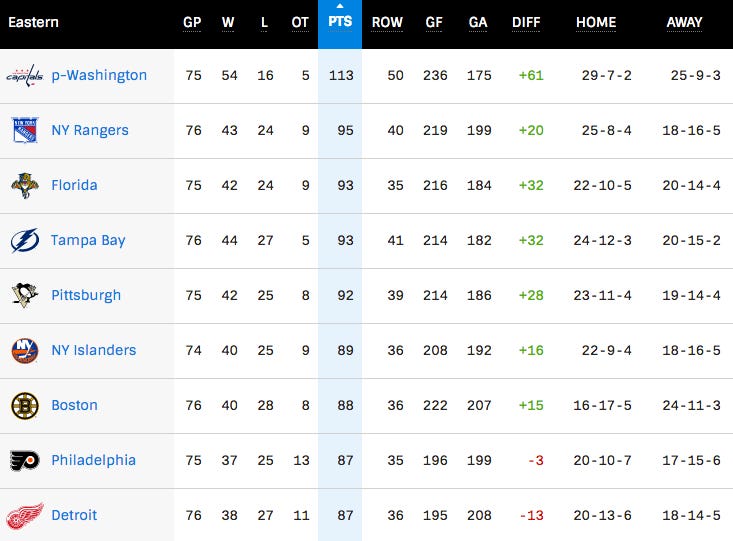 So that’s pretty cool. Pretty nifty some would say. Clinching the Presidents’ Trophy for best record in the league before any other team in the East has clinched a playoff spot thanks to a 4-1 win over Columbus last night. Home ice locked up for the entire Stanley Cup Playoffs. Not bad.

Pretty much that. It’s Cup or nothing. You can’t get to the Cup without winning regular season games first, but it’s not something to throw a parade about either. It’s just another stepping stone to the ultimate goal. Backstrom is obviously downplaying, but at the same time, his focus is strictly on the Cup. As is the entire team’s. Cup or nothing.

7 more regular season games. I feel like I’ve been counting down from 50 when it was obvious this Caps team was going to be the 1 seed. Now we’re at 7 and to be completely honest it’s the most nervous I’ve been all year. Ovi is paying hurt, Weber and Orpik (and Orlov when his brain falls out of his head randomly for 2 minutes every night) aren’t playing great, and Holtby hasn’t been as consistent as he was in the first half of the season. At the same time, this team STILL hasn’t lost back to back games in regulation, they have so many more scoring threats than just Ovi, and the rest of the defense like Carlson and Alzner are playing great. So 7 more games til the real season starts. The last time the Caps won the Presidents Trophy…well….I’d rather not talk about it. Hold onto your butts!

PS: I can’t decide if I want the Flyers to completely miss the playoffs or if I want to beat them in the first round. I think the latter, but I’m not sure I even want to give Philly that tiny bit of satisfaction of even making the playoffs at all.