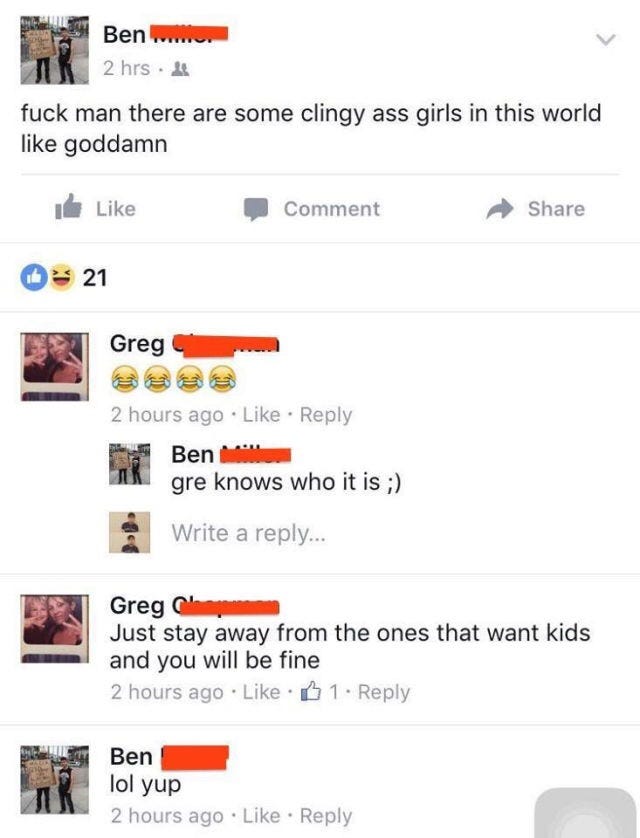 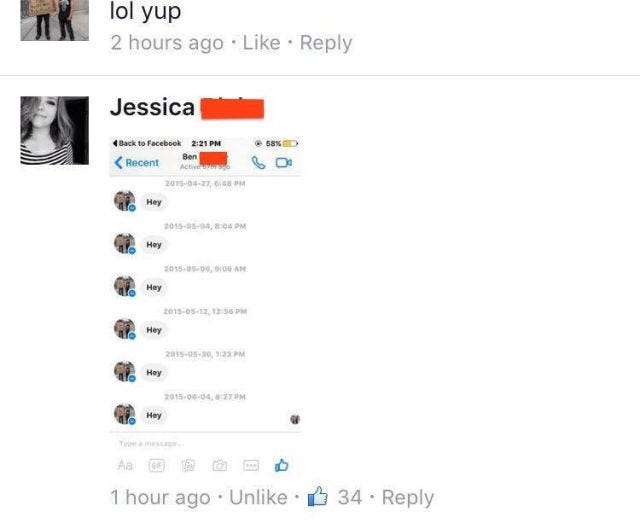 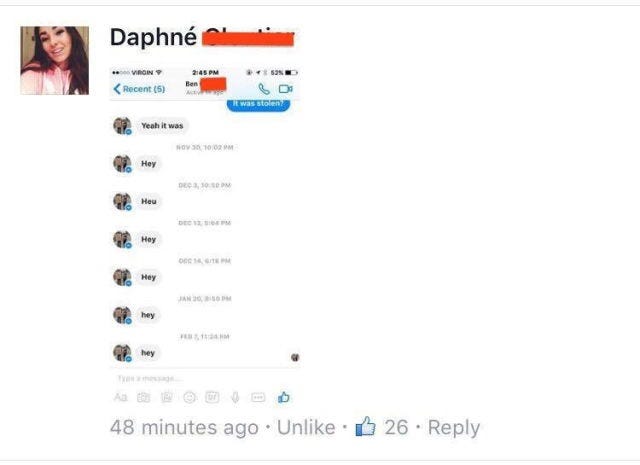 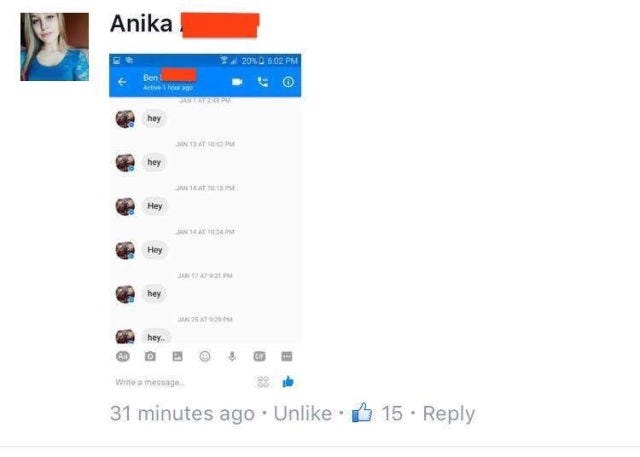 This one’s going viral today on a lot of sites with women gleefully pointing out the hypocrisy of this kid. And it’s an awful look, no question about it. Guys love calling a chick “clingy” the same way girls love calling a guy “creepy,” it’s an easy insult to tear someone else down to build yourself up and act like you’re better than someone you’re not. Just a bad look and an easy way for everyone else to tell that no one really wants you when it comes down to it.

But really this dude’s biggest sin is having zero DM game at all. What’s a chick going to work with when you say “Hey” “hey” “hey” “Heyyyy” even if she wanted to talk to you? So I’m going to go deep in my life resource guide to give you this from my area of expertise, Spags’s Guide for a Successful DM Slide:

1) For the love of Christ on a cross (pictured below) open up with something besides “Hey” - “Hey” means nothing, there’s a reason why grammar teachers try to stop people from saying it with that corny “Hey is for horses” joke. Open up with something she talked about or by commenting on some common thread you share, all the information you can use is literally one profile click away. And at least if your DMs get exposed some day, she’ll look bad and not you since all you were doing was being pleasant and she’s the one assigning meaning where there may have been none.

2) Two strikes and you’re out - Can you keep plowing ahead without getting a response and maybe it’ll work out? Sure. It’s also possible you’ll strike oil by fingering your asshole, doesn’t mean it’s likely. You send that first DM or two and get no reply? That’s a strike. You try again, that’s strike two. That’s when you want to back off. No one ever faults you for trying to creep if you pull back once there’s no interest. But a third time and you’re officially a nuisance. Being willing to walk away shows even if it didn’t work out this time that you’re a reasonable man and if you try again sometime in the future when the stars align, you’ll be in a much better position with her.

3) The goal isn’t to bang or get nudes, it’s just to talk with someone interesting - You’ve opened with something witty or something that you connected over on Twitter, Facebook, Snapchat, whatever. She’s engaged in whatever bullshit you’re putting out there so now you want to keep that conversation going, keep it interesting. But treat her like a human, don’t mention looks, just talk. Girls want to be won over, they want to be distracted, they don’t want you immediately jumping to “HUR DUR SHOW ME YOUR TITS” even if that is the eventual outcome. By keeping that entirely off the table until well after she’s on the hook, you’re not only being a decent human, you’re keeping her on her toes because you’re not acting like the other hamfisted idiots who think they can pick a chick up over DM.

4) DO NOT PULL YOUR COCK OUT UNDER ANY CIRCUMSTANCES - This one goes without saying with the others but I’m putting it in here anyway. The only time you pull your stupid dick out is if she’s specifically requesting it and even you double confirm that before it goes out. “No dicks” – imagine that said in the voice of mafia guys in movies when they say not to kill kids. (and for advanced level users, if you do end up being asked to send your dick over in the throes of e-passion, shoot like from the base like you’re shooting a majestic building, not from the top down like a sad game of Frogger). 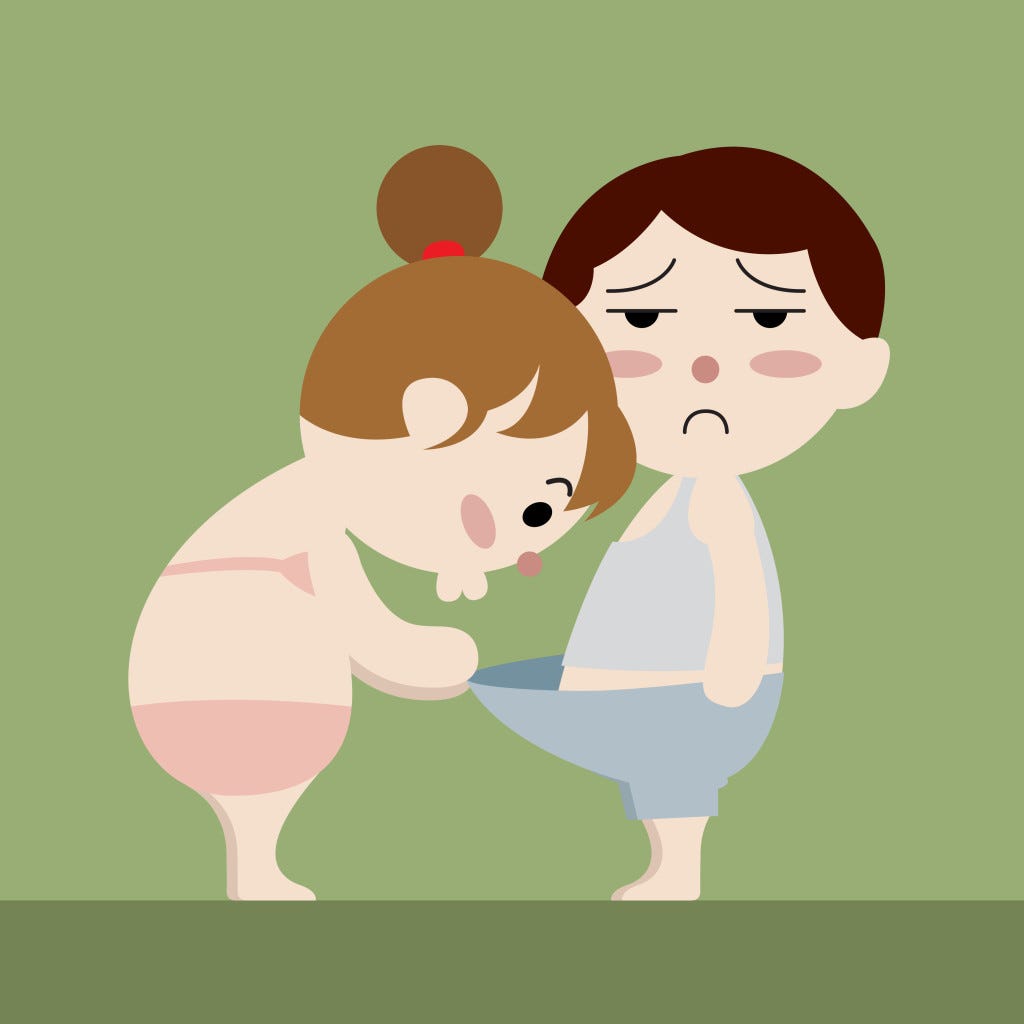 5) Always be willing to abort the slide - Conversations die out and because most girls aren’t used to being picked up via DM, you’ve got to respect the boundaries. Walking away means you can fight again another day when there’s a reason to talk and it also proves that you’re not doing this out of desperation. Pretty big difference between that and being the dude who says “Hey” 100 times. DMs are fishing, not hunting.

6) Doesn’t hurt to be slightly famous or at least decent looking - This isn’t all a meritocracy so if you can release a platinum album or something, that would definitely help.

7) When she’s on the hook, you’ll know - If you’ve done your job and kept the conversation interesting enough, she’ll want to follow each other on Instagram or Snapchat too or you can get a number to put in the more serious work of getting to hanging out. By now you’ve laid the perfect DM trap so all you have to do is let her walk into it.

And there you have it, a tried and true path to successfully picking up a girl over DM. Or just keep saying “hey” and end up dying alone with your dick in your hand like Ben here while everyone laughs at you all the Internet over. The choice is yours.