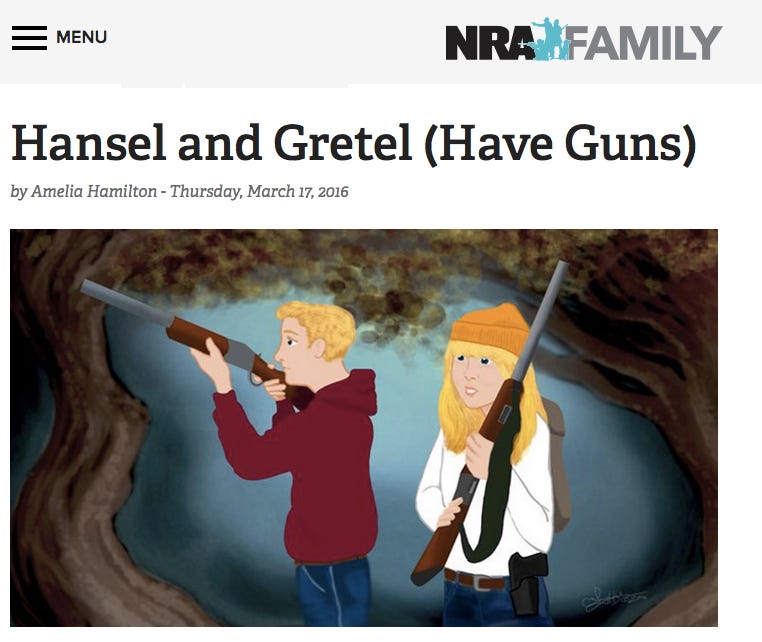 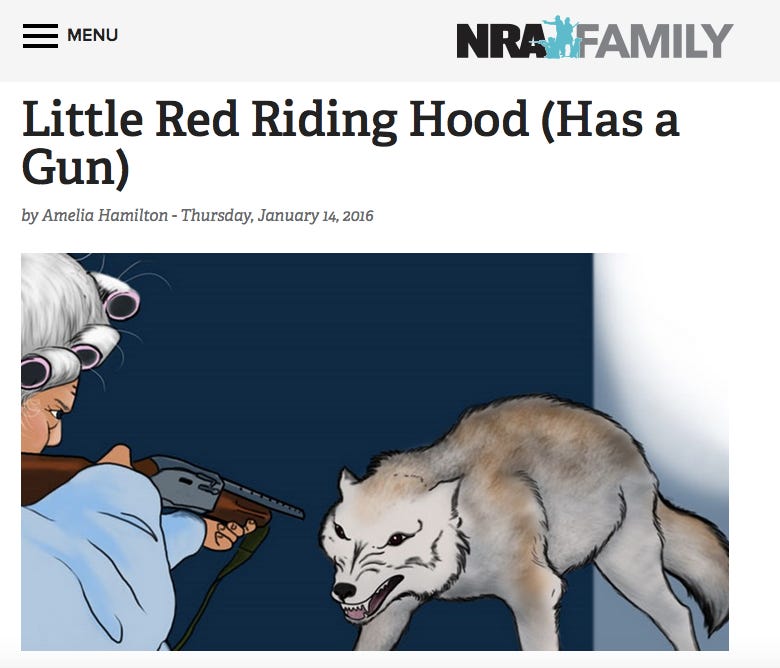 (Source) –In the N.R.A. version, Little Red Riding Hood set off through the forest to visit her grandmother, just like in the original. But the Big Bad Wolf did not scare her this time, because she “felt the reassuring weight of the rifle on her shoulder.”

When the wolf approached her, “she shifted her rifle so that it was in her hands and at the ready.” He fled in fear.

Grandma, too, was saved by a gun. While distracting the wolf with compliments about the size of his eyes and ears, she slowly reached for her weapon.

“The wolf leaned in, jaws open wide, then stopped suddenly,” Ms. Hamilton wrote. “Those big ears heard the unmistakable sound of a shotgun’s safety being clicked off. Those big eyes looked down and saw that grandma had a scattergun aimed right at him.”

Hansel and Gretel got a similar treatment. The story began with them hunting in the woods, eventually bagging “a magnificent 10-point buck,” when they stumble upon a gingerbread cottage where two little boys were imprisoned by a witch.

The siblings climbed through the cottage’s windows and rescued the boys while the witch slept in the next room. As Hansel unlocked their cage, his sister “stood at the ready with her firearm just in case, for she was a better shot than her brother.”

When they returned home the next morning, the children told the parents about the witch and soon, “Villagers, prepared with rifles and pistols, headed into the forest, Hansel and Gretel leading the way.” The witch was locked up by local law enforcement, and then everyone ate her house.

I’ve never been much of a gun guy, in fact I’ve never even held one, which I think makes me a bit of a pussy. Perhaps it’s due to the fact that I grew up in civilization or perhaps it’s simply because I don’t fear and want to kill everything, but they’re just not for me. Or, I should say, they weren’t for me. Because now I’m sold. Now that I’ve seen the good they can do, thanks to the NRA, they make a lot more sense. I’ve always heard the “only thing that stops a bad guy with a gun is a good guy with a gun” argument, but that didn’t resonate with me like this does. I mean, what am I to do if I stumble upon a sweet talking wolf who wants to eat me? How about a witch who lives in a candy house and likes to boil children? I need to shoot my way out of those situations, or at the very least letthem hear the unmistakeable sound of a scattergun safety being clicked off, to let them know I mean business.

I will say this, though. Gun nuts are the weirdest people in the world. Every time they talk, or write about guns it’s like they’re sending a sext. I know that everyone likes to talk about how guns are a phallic representation, but this shit sounds like a porn. They write about shotguns like I write about my dick in some haphazardly thrown together, drunk, 3 AM text to a girl who hates me. It’s all about the weight, the power, the security, and how it stands at the ready until it’s time to go off. Chill the fuck out, you creeps. We all know that just like my penis, you may talk a tough game but once you get into the heat of the moment you’re probably just gonna shoot yourself in your pants.