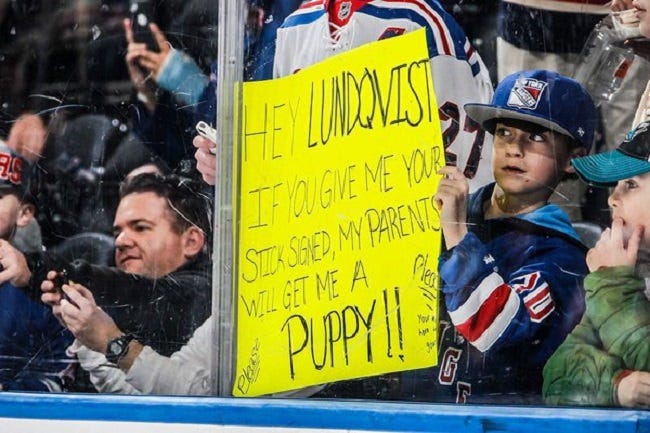 So this has been the hot new trend in the streets of little kid hockey fandom. Kid A gets a puppy if Player X accomplishes feat Y. We’ve seen it happen when Bobby Ryan scored a puppy-winning-goal for some fans in Ottawa. Cam Atkinson then scored a hat trick for a puppy in Columbus and it’s been a nice little feel good storyline to follow this NHL season. You’ve got hockey, you’ve got puppies, it’s two of the best things in the world combined into one. What’s there to possibly not love about that? It would be almost impossible for somebody to come in and ruin all the fun with this one but just like Kevin Garnett said, anything is possible. So in comes this little fucker in New York last night coming in hot to the Garden with a list of demands in order to get a puppy.

Hey, Hank. I’m gonna sit right here on the glass in a seat that probably costs a few hundred bucks. Next up I need YOU to give ME your game-used stick. But just giving me the stick isn’t enough. I need you to go find a sharpie, I need you to autograph the stick for me, and then kindly place it in my possession. Maybe throw a jersey in there or hell, maybe even a few hundred bucks since you know how much dog food can cost. And after all of that, my parents are going to give me a puppy that I never actually had to work for to earn. Because chances are they’ll sell your autographed stick on eBay to pay for the puppy like the couple of shiesty NYC parents they are. I know that he’s just a child and it’s 95% the parents fault here but seriously, I hate this kid. And I hate his parents and I hope he never gets his puppy. At least not right now because the little bastard doesn’t deserve it. Hell, there’s no way that he even wrote his own sign. You think a 10-year-old has that perfect caps-lock handwriting? Not a chance. He did nothing but stand on the glass begging for a free handout and that’s just the generation of America’s youth that parents are bringing into the world these days. Kid better just keep his silly little signs at home next year when Donald Trump is President.

This gif has nothing to do with the kid above. But it’s a puppy and it’s hockey and I love it and it’s a Monday so why the fuck not.