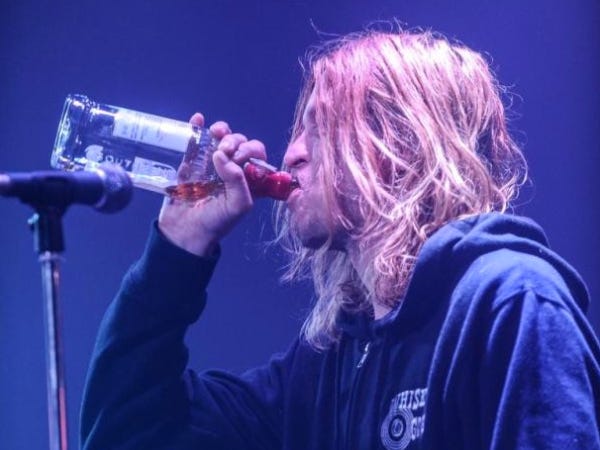 Doncaster - Troubled Puddle of Mudd frontman, Wes Scantlin, angered fans at yet another concert last night, following a drink and drugs meltdown at a Doncaster venue earlier this week. This comes after Tuesday’s sold-out concert at The Diamond Live Lounge in Wood Street, when Wes slurred his way through songs as he swigged a bottle of spirits on stage and boasted to fans about being high on crack cocaine. The singer, who has been arrested numerous times during a turbulent career, was booed and sworn at by angry fans at the Wood Street venue as the sold-out gig descended into farce.

Rockfeed - Puddle of Mudd vocalist Wesley Scantlin is seemingly the only remaining member of the band after everyone got up and walked off stage in protest of his embarrassing drunken behavior. Scantlin was on stage ranting about how someone stole his house and his money — and as usual, the frontman was clearly intoxicated. Puddle of Mudd performances have been marred by interruption from the often drunk vocalist.

So not only is Puddle of Mudd still touring, they’re an international act! They are touring over in the UK to sold out crowds! Amazing. Simply amazing. And even more amazing is fans are somehow let down by Wes.

Hannah Dorman continued: “What a disappointment Puddle of Mudd were tonight.

Uhhhh, what? That’s why you go to the Puddle of Mudd show, sweetheart. You don’t go for the songs, you go because you might quite literally see Wes die right there on stage. I love him bragging about being high on crack (everything’s so blurry for him amiright?), just completely doesn’t give a fuck at all.

Sure his band finally walked out on him, but how did they get to this point? Wes shouldn’t be allowed to decide what pants to put on in the morning, nevermind get on a plane to England and perform shows. Dude needs a straight jacket and elephant tranquilizers for the next 6 months until he comes back to planet Earth. But at the same time, that’s just rock n roll, baby! Drugs, booze, babes, sitting shirtless on stage high as a kite screaming about someone stealing your house, band walking out on you, it’s all in the rock n roll game. Sure he has 2 months to live until his heart is like fuckkkkkkk this, but when you’re the lead singer of the mighty Puddle of Mudd, that’s your destiny and you don’t tempt fate by cleaning up your act.

(Honestly, it’s past the point of ridiculous, someone needs to step in here right? This guy is on death’s doorstep and the entire world knows it and there’s not one person in his life that can step in and help him? Not good, you guys. Not good.)