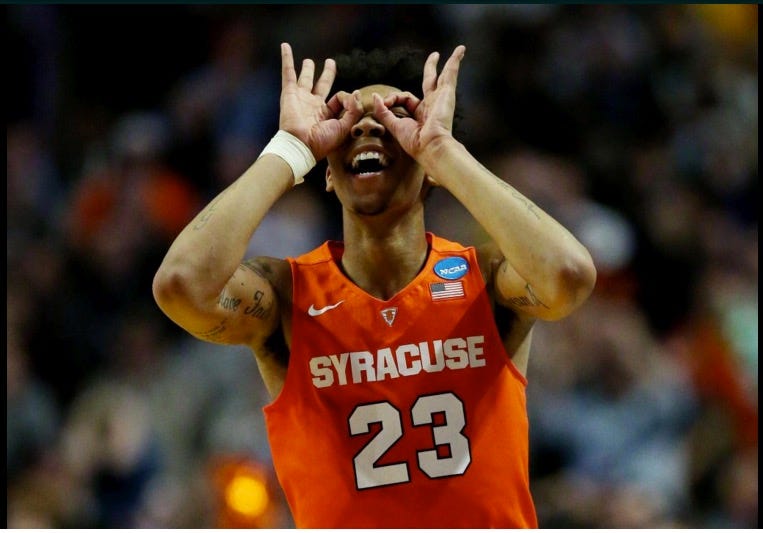 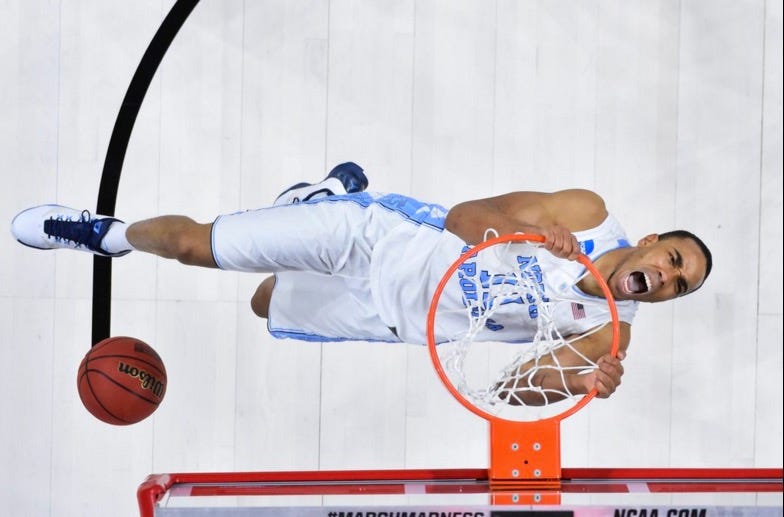 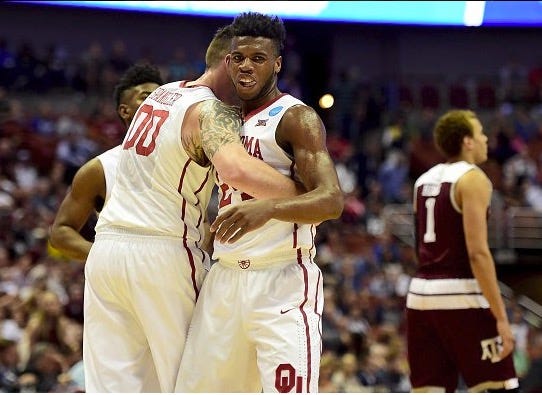 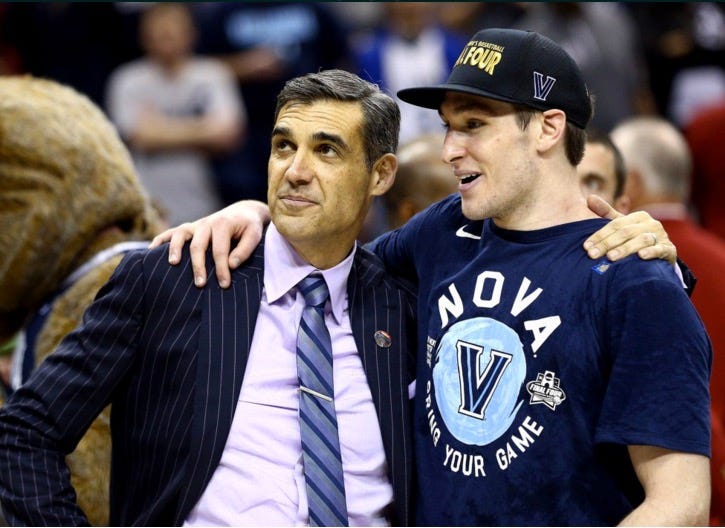 Annnnd the Final Four is officially set. Nova and Oklahoma, UNC and ‘Cuse matching up for a shot at the National Championship game. After a historically wild opening weekend, things settled in a little bit – a lot more blowouts, a lot more chalk advancing. But, since it’s March Madness, there were obviously still plenty of awesome moments. Here are the 10 best from the Sweet 16 and Elite 8.

They got bounced by just a flat out better team in Carolina, but that win against Wisco was all heart and guts. And Wisco collapsing, but also heart and guts. Demetrius Jackson was a stud and Zach Auguste was a beast. And Mike Brey coaching with a torn calf muscle after ripping that shit on the sticky floor mat? Like I said, heart and guts.

All this needed was a shot of his uncle with a massive 20 foot clock around his neck and it would have been complete.

8) Brice Johnson Is Not Human

The single most impressive athlete to watch play basketball this year. Has at least one “how the hell did he reach that ball 14 feet in the air before it started coming down?” block per game.

If Maryland made just half of their wide open shots especially during that one stretch in the second half that Kansas left the door open, they had a legit shot in this one.

6) Nova Pulling Up For Half Court

As much of a pretender as Nova was last year, that’s how much of a contender they are this year. Easily the most impressive team I’ve seen play in this tournament, aside from UNC when they’re clicking on all cylinders. Love Buddy Hield but as far as overall best game I’m pulling for a Nova/Tar Heels matchup.

This was so awesome to watch. When a player is so hot and confident that they just pull as soon as the ball touches their hand, and you KNOW it’s going in. So basically Steph Curry mode every day of his life.

UNC can have some frustrating stretches where they settle for jump shots, but when they’re on, nobody can keep up with them. And that all starts with Marcus Paige all of a sudden finding his jumper at the exact perfect time after a pretty bad season.

Tyler Lydon doesn’t need a shoe like the rest of you peasant jump shooters. In retrospect should have been a pretty clear omen for the things to come in this one.

More on Cuse to come.

Wouldn’t be a Roundup with just a pure moment of humor. Ok maybe not funny for that girl getting iced in the grill. But hey. You want the good seats you gotta be willing to deal with some concussions.

My favorite player in college hoops hands down. Watching him take over a game and carry his team to the Final Four has been awesome. 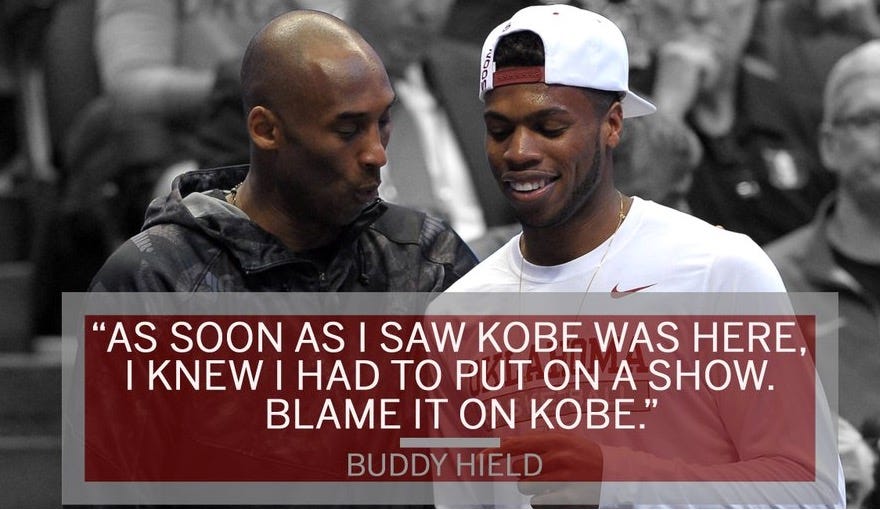 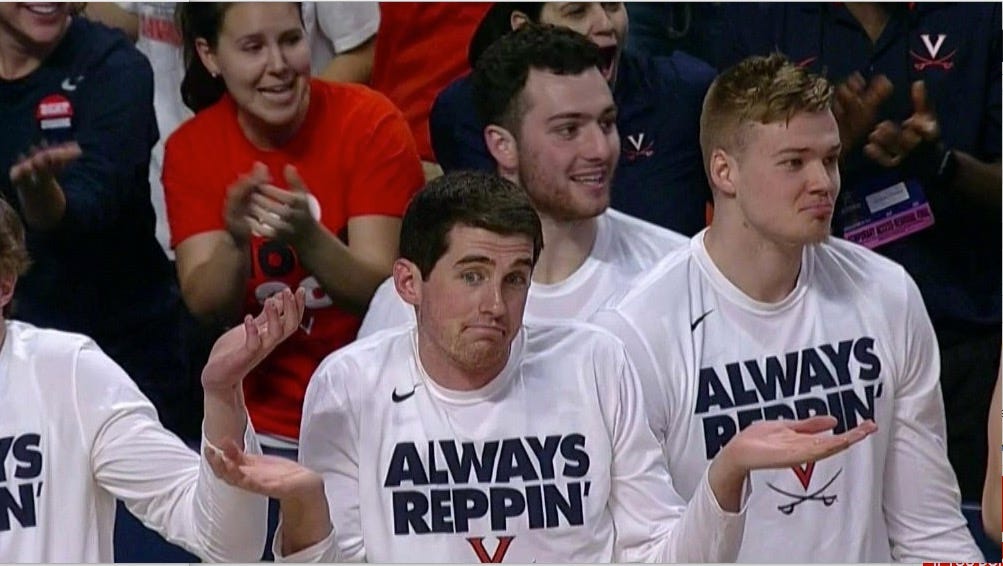 How the hell is Syracuse in the Final Four? I know, as the super funny people of Twitter with next-level senses of humor told me – “because they won each game.” But the team that was incredibly mediocre all year and had noooo business being in the tournament is now one of the best 4 teams left. That’s March Madness baby. I mean make no mistake about it, the analysts saying they didn’t deserve a tournament spot were completely right, they didn’t. But hats off to them for taking advantage of the spot they did get. What were they supposed to do, turn it down?

That’ll do it…see everyone next weekend for the Final Four.