Full Disclaimer: they aired this segment on ESPNU this morning and if I was going to start my day with a little cry then so are the rest of you. But even with how dusty whatever room you watch this in gets, “20 Years and 11 Seconds” is always worth the watch. Because it’s such an incredible story of resiliency, of overcoming one of the biggest obstacles life can throw your way and about the strength of the human spirit in general.

The 2016 NCAA Men’s Ice Hockey Tournament is well underway right now with the 1st round of games getting started yesterday and today. Players from 16 teams across the nation are all living out their dream right now of playing ice hockey at one of the highest levels. Sure, some will move on to to play in the NHL but for a lot of these kids, this is the peak. Their dream has become a reality and for 11 seconds of his life–after working for 20 years to get to that moment–Travis Roy got to experience that feeling. I’m sure he would have loved to experience it for a little longer but in the grand scheme of things, it’s 11 more seconds of living out his dream than most people in the world ever get to experience. To see how people like Travis Roy, Jack Jablonski and Denna Laing have been able to overcome these horrible tragedies and turn them into positives is incredibly uplifting and inspiring to say the least. So whatever you do today, just do it as if you can only do it for 11 more seconds of your life. Doesn’t matter what it is. Could be playing pick-up basketball, could be drinking with your boys, could be anything in the world. Just do it like it may not be an option for you ever again 12 seconds from now.

Moving on from the sappy stuff, let’s just go through a quick rundown of everything that happened yesterday in college hockey action.

– North Dakota came out and absolutely DOMINATED Northeastern. Remember the other day when all the Northeastern people were butt hurt to the maximum that I didn’t mention the Huskies as a possible bandwagon to join? Well this is exactly why.

Great season for NU. Winning the Hockey East was huge for them and it’s something they can build off of. But they caught the short end of the stick when they got matched up against UND. The Fighting Sioux/Fighting Hawks ended up winning 6-2.

– March Madness: College Hockey edition. Couple of games couldn’t get decided in regulation so it was off to overtime. We’ll start with Michigan v Notre Dame…

What a fucking pass from Michigan’s JT Compher here. Backhand on the doorstep right on the tape. And of course it was Tyler Motte to put home the game winner. The Chicago Blackhawks have even more playoff heroes just waiting in the pipeline. But yeah, Notre Dame basketball was able to kill Big Cat but the hockey team wasn’t able to finish the job and murder Pres. Win some ya lose some.

– Last year’s champs have officially been eliminated as the Providence Friars lost in double-overtime to Minnesota Duluth. Combined I’d say the two teams had at least 15 chances to end the game in the final minutes of the 3rd period and both overtime periods. But a few huge saves and a few pings off the crossbar kept it a 1-1 game until this goal from UMD freshman Karson Kuhlman.

Providence is the first 1-seed to go down in the tournament. And now Minnesota-Duluth will have Boston College in the next round after they knocked off Harvard 4-1 in some Boston on Boston crime.

Updated look at the bracket with game times for today. 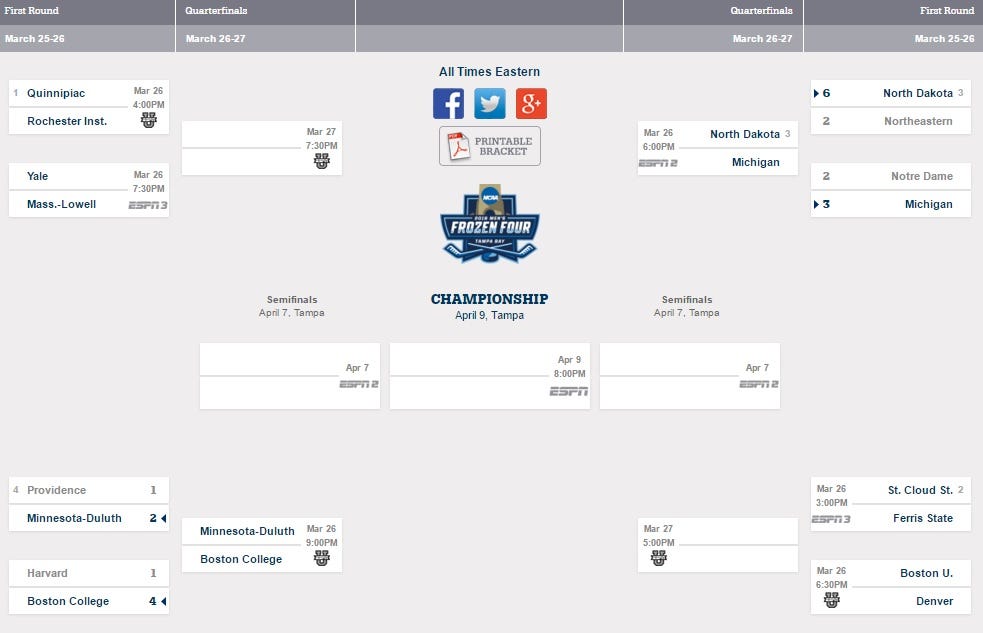