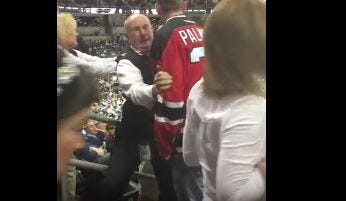 I saw this fight on The Big Lead.  It’s going viral because the kid dropped a couple Ric Flair Woos in a security guards face.  But for me I’m all about the old ass security guard who originally broke this up. That’s just a guy who does his job because it’s his job.  Because that’s what men do.  That’s old man attitude. That’s what made America great.  So many times you see bystanders, security guards not get involved in situations like these.  Just pretend to look the other way or slowly walk up to the confrontation.  Not this guy.  Not on his watch.  You’re gonna have to go through him to get to the other guy.  Mad respect.