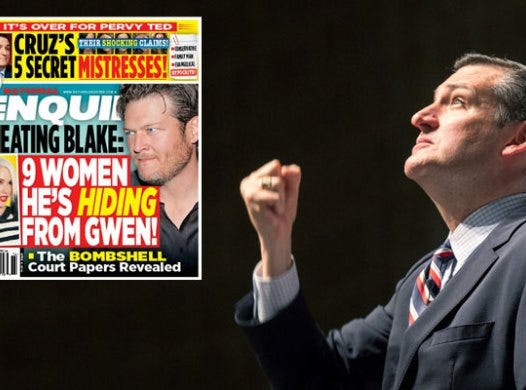 Enquirer – Presidential candidate Ted Cruz is trying to survive an explosive “dirt file” on the finger-wagging conservative senator! And the new issue of The National ENQUIRER — on newsstands now — reveals how the reports say the staunch Republican is hiding FIVE different mistresses!  “Private detectives are digging into at least five affairs Ted Cruz supposedly had,” claimed a Washington insider. “The leaked details are an attempt to destroy what’s left of his White House campaign!” The ENQUIRER reports that Cruz’s claimed mistresses include a foxy political consultant and a high-placed D.C. attorney! There are also whispers of other intimate late-night sessions Ted has had in Washington — and even a wild sex worker makes the cut!

I dont know who leaked this story. I dont know if it was Donald Trump trying to ruin Ted Cruz or Ted Cruz trying to prove that Ted Cruz fucks a lot, but regardless of who it is, this shit is definitely not true. Because there is just no goddam chance that Ted Cruz convinced five different chicks to have sex with him. There is no way that this Kevin Malone-Grayson Allen-Count Chocula lookin motherfucker put his penis inside 5 different mistresses. All of which are at least semi attractive, apparently. Like I said I dont know which side of the aisle leaked the story, but their problem is they went overboard. If they said Ted Cruz had sex with one mistress…ok fine. If they said that one was a hooker, obviously we can understand that. Ted Cruz could have spent that Super PAC money on a whore no doubt. But there is no way 4 other chicks had sex with him. No way, no how.

Hes the goddam Zodiac Killer for fucks sake. Not Bill Clinton. I know hes a powerful politician and shit but again, its not enough for me to think about Ted Cruz running through bitches like a rock star. Whoever started this rumor just went too far. Flew too close to the sun on wings made of Marco Rubio’s earlobes and took their lie too far. Theres just no chance its true.