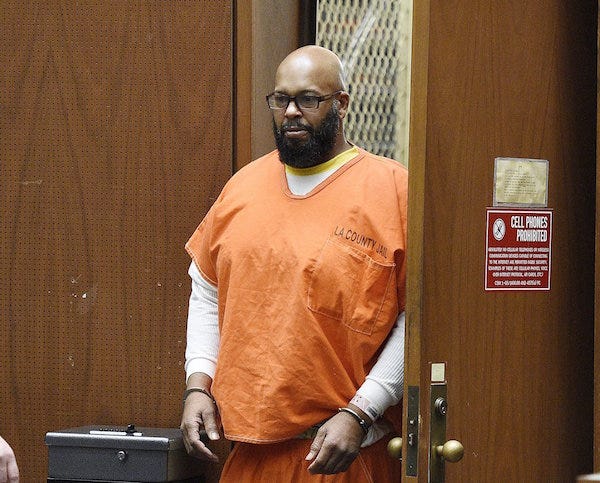 Daily Mail- Suge Knight revealed in court on Wednesday that he had emergency surgery for a ‘busted’ appendix this month. The 50-year-old Death Row Records founder hobbled his way to the defense table as he clutched his stomach and grunted with pain. He told Judge Ronald Coen that not only did he have surgery, but he has an abscess near his colon that requires either another procedure or a catheter to his heart for antibiotics. ‘I’m not good at all,’ Knight told Judge Coen, who later told the hip hop mogul to take better care of himself and to ‘start working out’.

Look at everyone taking shots at Suge. Chris Rock at the Oscars. The judge in this case. God knows who else on Twitter. Acting like Suge isn’t a real life Michael Myers or something. Yeah he is limping around the court room like Willis Reed right now with a catheter hanging out of his dick. But that’s the thing about Michael Myers. You can’t kill him, no matter how slow he is or how dead he appears to be. In fact, just when he appears more dead than ever is when he strikes next. So I am here to just tell Suge to get well and best of luck with his trial. I mean I won’t hope that he gets off for murdering someone with his car. At no point should the art of Grand Theft Auto imitate life. But I am just saying that I hope a fair trial plays out in the justice system and his health improves, preferably behind bars. That is all.

Seriously, please don’t murder me and/or my family for blogging about this.