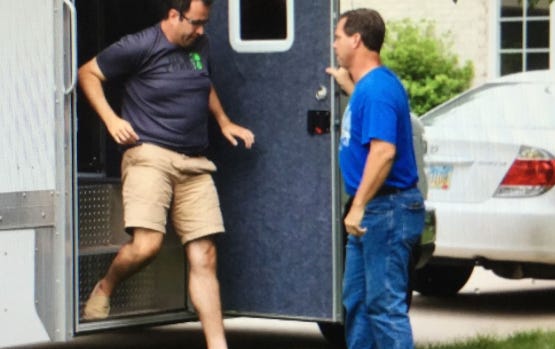 (Source) The convicted felon who served a platter of knuckle sandwiches to Subway sandwich perv Jared Fogle was set off in part because the hoagie pitchman hired cellblock bodyguards as protection, according to a report.

Steven Nigg — a 60-year-old armed robber serving time at the Federal Correctional Institution, Englewood, in Colorado — roughed up the disgraced pitchman, punching him “five or six times” and bloodying his nose, according to the formal report on the Jan. 29 incident.

“He has paid protection, he had bodyguards around him. One of them or another child molester must have been the witness [to the fight].”

Fogle is serving a 15-year federal sentence in Englewood after admitting that he crossed state lines to have sex with underage girls.

Child-sex offenders are popular targets behind bars. Nigg’s relatives told TMZ that the con was enraged over the number of sex predators housed in the low-security facility.

The thought of Jared Fogle walking around the prison yard with his hired pedophile security guards is absolutely fantastic. He’s like the dweeb drug dealer from Better Call Saul with his baseball card collection and bright yellow hummer. I mean I think we all kind of assumed that Jared would essentially be that fat inmate that died on the first night of imprisonment at Shawshank. Sobbing like a little baby, too soft for prison. But hiring a security team, and then having that security team not do the very thing they were hired to do? Come on Jared, this is fucking pathetic. You’re getting punk’d every which way. Have some self respect. Because the only thing worse than getting your ass kicked in prison and having it be front page news, is getting your ass kicked in prison after basically admitting you are petrified of getting your ass kicked in prison by paying a bunch of people to defend you and then having that be front page news.

I also love that Jimmy Nigg specifically wanted it on the record that this was not the first pedophile his brother beat up. Very important, please make a not. This is just the first time he was caught. The Niggs have a name to uphold.