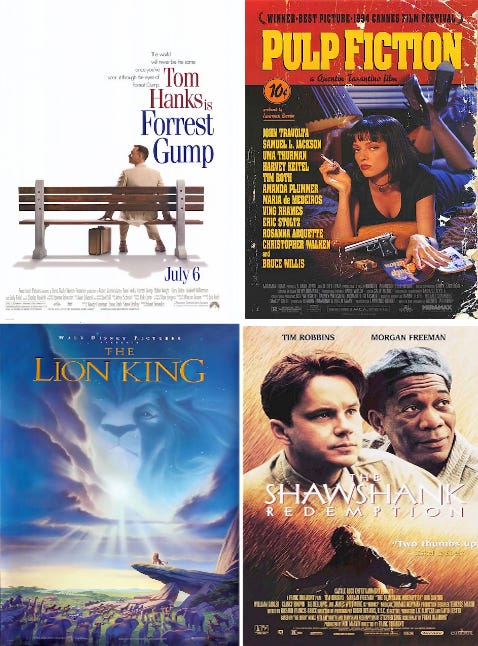 As I wrote in my Tonya Harding blog earlier today, 1994 has to be considered the greatest year ever. Just an avalanche of greatness in news, sports, movies, and music. So for today’s episode of The Eliminator, we will focus on the movies portion of that. The 1994 Oscar nominees for Best Picture were just silly. Forrest Gump (the winner), Pulp Fiction, Shawshank, along with Quiz Show and Four Weddings and a Funeral. Now I am not a huge fan of the last two. But the first three are instant classics for anyone with a brain. Just picking out the fourth movie to include here was a chore in itself. Lion King, Dumb & Dumber, Ace Ventura, Mighty Ducks 2,True Lies, and a slew of others. Just a power packed year. I decided on Lion King since it is probably the best Disney movie of all-time and not a comedy, which are sometimes like comparing apples to oranges with dramas (and by the way apples >>>>> oranges, but that’s another blog for another time).

So here we have it. Forrest Gump, an American hero so great that Peyton Manning mentioned him in his retirement press conference. Pulp Fiction, the movie that brought Travolta back from the dead so he could be Mutant Robert Shapiro on our TVs every Tuesday night. Shawshank, the king of the flip-back movie whenever it is on TNT. And of course The Lion King, the greatest thing the evil empire of Disney has churned out this side of Space Mountain. If I had to choose one to eliminate, I would instead eliminate myself than take out one of the greatest things that the best year ever created. That’s just me being selfless (and a huge pussy). But you, the reader, can make your pick below and nobody will know which absolute classic you slaughtered in cold blood. So vote below and then bitch about all the people that chose any of the other three movies.