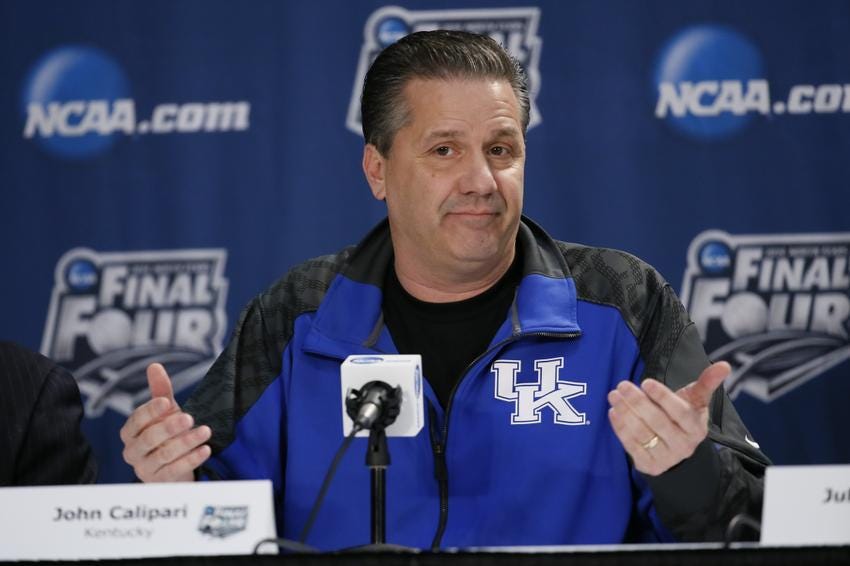 In a series of tweets Kentucky head coach John Calipari announced every single eligible player from his team would be declaring for the NBA Draft. You know what? They all should and all makes absolute sense.

Calipari said even the walk ons will put their names in and the only two who won’t are Isaac Humphries and Tai Wynyard, who are too young to declare. This isn’t a big fuck you to the NCAA by any means by Calipari – as many (cough, cough Deadspin) would make it seem to be. It’s not a dumb rule.

For those who aren’t aware, the NCAA changed their declaring rules. Every athlete can declare up to three times to test the waters. They have 10 days after the combine to decide to stay in the draft or come back to school. It allows a lot of those fringe players – in Kentucky’s case an Isaiah Briscoe – the chance to get evaluated and see what they need to work on if they come back or if they should just stay.

This is why we’re seeing names like Makai Mason declare. It’s why someone like Malik Newman said he’s declaring for the NBA Draft, but not hiring an NBA agent. Literally every person with the slightest chance of playing in the NBA should declare just to get evaluated.  Granted this will lead to a ton of lame jokes on Twitter and in the cubes with ‘well I’m declaring for the NBA Draft and not hiring an agent too.’ Don’t be that person.

From the Kentucky side? This is just a recruiting pitch for Calipari and a genius one. He preaches it being a players program and this is just another step in proving that. On top of that kids who are expected to be a one-and-done feel embarrassed if they have to come back for a sophomore year. Now, instead of having to have that interview by themselves, the entire group will declare they are returning to school, keeping pressure off by the local media.

Don’t be surprised to see more names declaring this week, though it will be tough to beat freshman walk-on Jonny David.