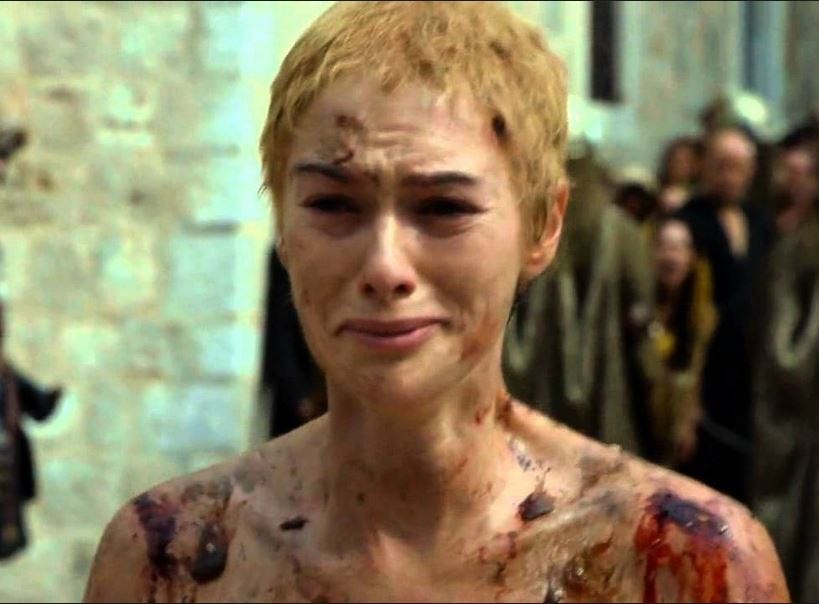 Huffpo – Lena Headey, who plays Cersei on the HBO series, spoke to Entertainment Weekly recently about the upcoming season, which she calls Cersei’s “most interesting” yet. The actress said her character has “nothing to lose” in Season 6 “Her relationship with Jaime is at an all-time weird level,” Headey told EW, adding that the new season is “juicy” and “so fucking dark.”

There is no show I have a bigger love hate relationship with than Game of Thrones.  Every Sunday Night I watch it waiting for Daenerys Targaryen’s dragons to eat the bad guys or Arya Stark to start murdering people.   It never happens.  Instead everybody you like dies or gets gang raped and then dies.  9 out of 10 weeks I’m left wondering why I even watch this show.  It’s just so fucking depressing.  The good guys never win.  Nothing good ever happens for them.  So I don’t even know what to make of this quote from Cersei.  Season 6 is “so fucking dark”   Compared to what?  The first 5 seasons?  You’re telling me this season is darker than that?  Well fuck I don’t even know if I want to watch it anymore.  Like I get that not everything can have a nice happy ending.  The good guy doesn’t always win.  But I need the good guy have at least 1 good moment.  I just don’t get how this season can be darker than the last when the last season almost put me into clinical depression.  I’m seriously debating not watching it.  I purposely don’t watch sad movies cause I don’t like feeling sad.  Why watch Game of Thrones if I know everybody I like gets murdered and raped.