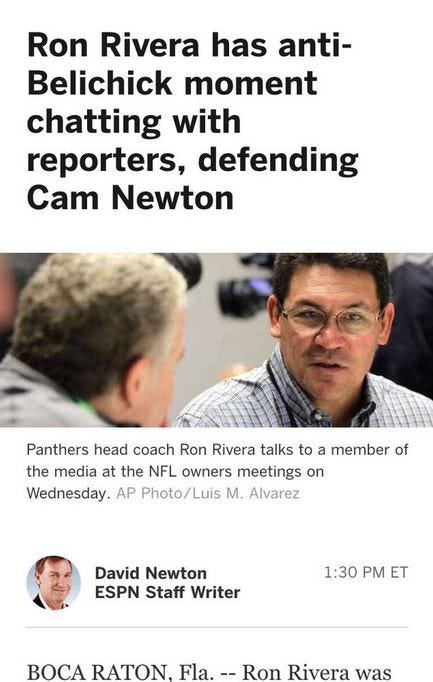 All things considered that may be the most misleading and worst headline ever written. I mean I saw this and it immediately got my dander up. Like what did that motherfucker Ron Rivera say? I’ll choke his ass out! (with the written word) I was legit gearing up for a fight. Then I read the article and guess what his big “Anti Belichick” moment was? Riverboat Ron moved a tape recorder closer on the table. OH SNAP! Hey Belichick Boom Roasted! No seriously that was it. Somehow moving a tape recorder turned into a headline about Rivera attacking Belichick. What a fucking disgrace. And ESPN wonders why Pats fans hate them. It’s because of shit like this. Making up stories out of thin air to attack the greatest coach who ever lived for a few clicks. Why? Because Belichick wouldn’t give this snot nose reporter a soundbite? Grow up.