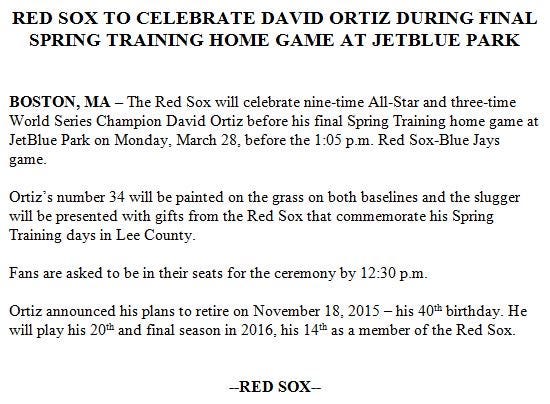 This is the dumbest thing I’ve ever seen. The Red Sox are having a ceremony for David Ortiz’s last meaningless game? His last time playing a game that he’s openly admitted is stupid and doesn’t even enjoy playing in? This is one of those annoying marketing things that you have to deal with from the Fenway Group, and one I’ve said a million times that I’ll happily deal with as long as they spend money and try to win, but it always comes off as so forced. It’s like they’re announcing to the rest of baseball that this is a really huge deal, David Ortiz leaving the game, and should be treated as such.

That’s why the whole Ortiz “tour” is going to be fascinating to me. I get that in the current sports climate, you more or less are forced to announce that you’re retiring. Be it because owners want to make some more money off you, advertisers that are trying to get one last rush on your name, or just your own self-centeredness, the announcement almost always has to come early. But Ortiz’s is going to be pretty awkward, no? I just can’t imagine every team giving him a ceremony and a gift, as they did with Jeter or Mariano. It feels as if it’s expected, but I don’t see why other teams would. I love Ortiz but I have no problem admitting he’s not Jeter or Mariano. Like do we expect the Houston Astros to have an on-field ceremony for David Ortiz? Or the Oakland As? Cleveland Indians? That strikes me as ridiculous. I understand if the AL East teams give him a goodbye gift and hat tip, but outside of that I wouldn’t fault any team for hardly even mentioning it. Maybe a quick, “playing in his last game at (insert stadium)… David Ortiz,” during starting lineups and that’s it.

But I guess this is the start of what John Henry and the Fenway Group expect to be a yearlong ride into the sunset. Red carpets and painted numbers and a sideshow everywhere you go. Ortiz’s last game in Fort Meyers! It’s David’s last game at Fenway in a month that starts with the letter M! The last time you’ll see David Ortiz on a baseball diamond on a Tuesday in a Spring month! Just relax, guys. Ortiz is the best designated hitter to ever live, but an entire season of ceremonies, especially notoriously corny Fenway Group ceremonies, is going to get old in a hurry.