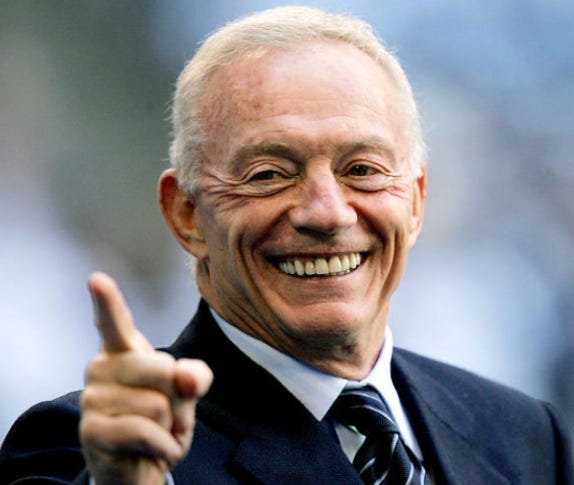 (Source) Cowboys owner Jerry Jones isn’t buying that football is linked to head trauma and brain disease like CTE. In fact, he thinks that it’s absurd to relate the two.

One week after NFL senior vice president for health and safety Jeff Miller told a congressional roundtable that football should be linked to CTE, Jones fired back to reporters at the owners’ meetings in Florida.

He said via ESPN:

“We don’t have that knowledge and background, and scientifically, so there’s no way in the world to say you have a relationship relative to anything here. There’s no research. There’s no data. … We’re not disagreeing. We’re just basically saying the same thing. We’re doing a lot more. It’s the kind of thing that you want to work … to prevent injury.”

“No, that’s absurd. There’s no data that in any way creates a knowledge. There’s no way that you could have made a comment that there is an association and some type of assertion. In most things, you have to back it up by studies. And in this particular case, we all know how medicine is. Medicine is evolving. I grew up being told that aspirin was not good. I’m told that one a day is good for you. … I’m saying that changed over the years as we’ve had more research and knowledge.”

Believe it or not, Jones said all this while admitting that he would like to make the game safer.

Say what you want about Jerry Jones but don’t say he’s a man who wavers under public scrutiny. Just an all time Jerry piece here. Oh the world thinks Greg Hardy is a scumbag piece of shit? Well he looks like a leader to me. Oh the NFL has finally admitted a connection between concussions and CTE, something anyone with a non-concussed brain could have figured out for a while now? Nah, need studies, need someone to actually look into this, clearly no one has ever done a study on the health of a brain before, that’s actually something we should do, don’t thank me for the idea.

Jerry Jones will go down swinging when it comes to the NFL, and you may think he’s crazy but you have to respect his utter disregard for facts and common sense. I mean what even was that aspirin story? If I’m following his logic here he’s basically saying aspirin used to be bad for you but then it turned out it was good so maybe someday concussions will actually turn out to be a positive for the health of one’s brain? Flip the whole thing on it’s head. Everyone in the world thinks putting your brain through a minor car crash is a bad thing but Jerry is out here proposing that maybe it’s a benefit, who knows without proper studies right? Just need more research, can’t decide anything yet, gotta wait for all the facts to come out. Data, give me data. Oh they’ve done that? Well I haven’t read it yet and everyone knows if you haven’t read a medical study with your own eyes then it’s not fact yet, old hockey trick.