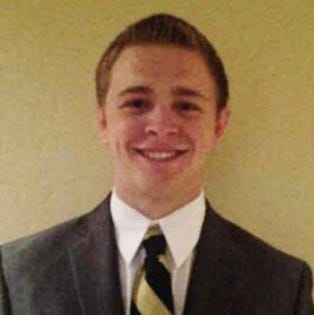 (NBC) — The three missionaries — all from Utah — were identified by the Church of Jesus Christ of Latter-day Saints as Elder Richard Norby, 66, of Lehi; Elder Joseph Empey, 20, of Santa Clara; and Elder Mason Wells, 19, of Sandy. “He had only been in Brussels for six weeks,” Wells’ weeping mother, Kymberley Wells, told NBC News. “We found out when we were called early this morning. We don’t know enough about his injuries yet.” In a later statement, the worried mom said Wells was undergoing an operation to repair damage to his foot. This was not Wells’ first brush with terror. He was in Boston to watch his mother run the marathon in 2013 when two Chechen immigrant brothers set off shrapnel-filled bombs that killed three and wounded scores more, his family said. Wells was also in Paris this past November when the French capital was attacked by Belgium-based terrorists, the family said.

Dude… WHAT?! I don’t like to make assumptions, putting aside the fact that all I do all day is make assumptions, but this is pretty suspicious. You’ve been at the last three major terrorist attacks carried out against western civilization? There are two options here:

1. Mason Wells is a terrorist. He’s part of a religion that most white people think is weird, so he does fit literally all of the qualifications. If he was a Catholic, or even a Jew, I’d give him a pass here. But if you put some weird bullshit like Elder in front  of your name and have made-up relationships like sister wives, you’re sus. You’re as sus as it gets. Those are the rules and if you don’t like them then you shouldn’t have followed a religion that was created last week and whose creator said, “Ah, shit, I can’t show you the plates right now but I swear they’re real,” when asked to present any of his proof, like it was second grade math homework. That ones on you, Elder Mason, with your dumbass name.

2. This dude is officially a threat to national security because he’s been sentenced to die by a higher being in a terrorist attack, Final Destination style. You know those microchips they put in dogs? Mason Wells needs one in him ASAP so I can stay the fuck away from him forever. I need a “Where’s Wells?” iPhone app so you can just track him forever and make sure you’re in a different timezone. If he’s smart, he’ll do this willingly and get rich selling that shit for .99 cents then move to his own island, if he’s stupid we need government to force him to do it. Freedom isn’t free, this is the sacrifice you make for your country, Elder Mason.

I don’t know which of those two situations are more plausible, but it’s one of them. You don’t just overcook a hamburger, and you don’t just find yourself in the middle of three separate terrorist attacks unless you live in the middle east. Something bigger is happening here, it’s just a matter of finding out if Mason Wells is a culprit or somehow got handed a Black Spot.