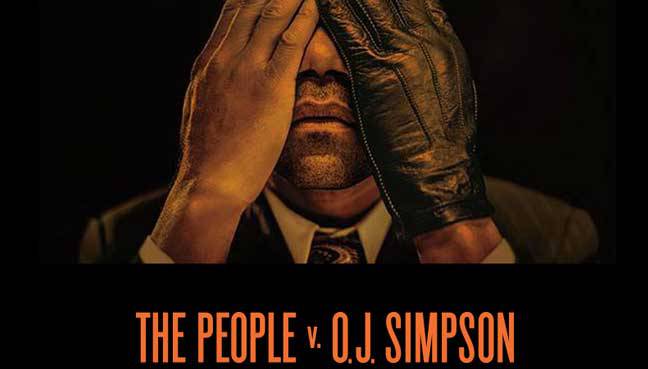 FYI, there are a bunch of Vines and video in this blog, which may cause it to load poorly on mobile or poor connections.

Last night’s episode was basically all about the jury in the OJ trial, which included Lionel The Juror, who is basically my new favorite character on TV.

We always know Mr. Yohnnie is going to get soulful every episode now that the defense is starting to run away with the case. But last night, we got our Moment Of Soul before the opening credits were done rolling.

Here is the moment everyone was buzzing about last night. The black jurors and white jurors arguing over whether they should watch Martin or Seinfeld. Even one black juror dropping a “What’s a Seinfeld?” I guess this was the biggest cultural divide in America before OJ decided to go from actor to murder suspect.

By the way, Martin won the vote. And while I love Martin, I would have been pissed as a Seinfeld fan. At least until everybody started dancing. Then it would have been impossible to be angry.

Meanwhile, we find out that OJ is a Seinfeld guy in jail. Probably a good thing for Uncle Juice that the black jurors didn’t learn about that. And the chimpanzee episode of Seinfeld is Kramer at his finest.

We later meet Dennis Fung, who gets absolutely lambasted by the defense for the way he collected DNA from the crime scene. But the worst part is that he shakes everyone’s hand like the weird, nerdy kid in middle school. He could have had an HD video of OJ killing people and OJ still would have gotten off.

Which leads to Marcia throwing a shit fit. Having your background music go from Kiss From A Rose to a 90s alternative rock song is all you need to know about how Marcia Clark’s case went after her haircut.

Jurors also started dropping like flies as their backgrounds were investigated. This guy thinking he could escape a kidnapping charge that led to a mugshot was laugh out loud funny. He should have went with the “Can you technically ‘kidnap’ an adult?” defense.

And a female juror was tossed for not admitting that her husband sexually assaulted her twice, to which F. Lee Bailey says that you can’t rape your wife.

So to recap, in the last three episodes we’ve had F. Lee drop 100 hard N bombs, tell Chris Darden he is hung like a field mouse, and then dropped a technicality about rape. This Stoolie’s tweet says it all. Even Pres wouldn’t touch a guy this radioactive.

As the defense keeps losing jurors they like, Meester Yohnnie has a slight breakdown in court which is exactly how I feel when I mistakenly say that I want a receipt with my ATM transaction.

And Marcia just rubbing some salt in the wound by stressing the “COC” part of Cochran. I hope she really did that during the court case. It’s the grown up version of “Aman-Duhhhhh” from Can’t Hardly Wait.

The jury comes out in all black because they are pissed about the way they are being treated. God damn the OJ trial on Twitter would have been bat shit crazy. Even the old bird that looks like the grandma from Wedding Singer appears to be pisssssed.

And shout out to Lionel for not participating in the blackout. Probably didn’t pack a black shirt that fit well. Us fellow big men stand behind you, Big Dog (definitely Lionel’s name at home). 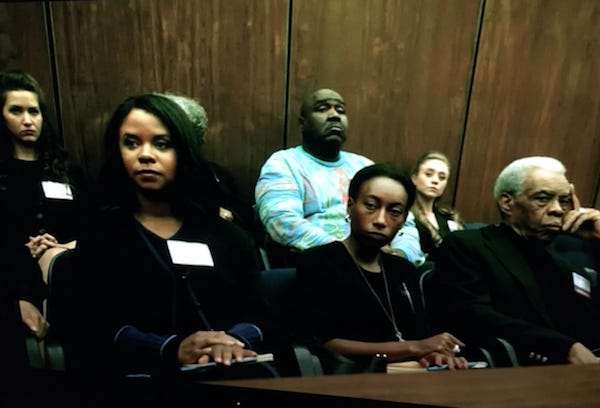 Meester Yohnnie drops the line of the episode here. If you don’t think that was a reference to Marcia’s jungle fever, you clearly have never gone to law school.

Which takes us to the worst acting of the entire series (which is saying something). At first, I honestly didn’t know if this was supposed to Robert Kardashian clearly trying to fake cry or just Schwimmer sucking. Yup, just Schwimmer sucking. And kudos to FX for hiding Kris Jenner’s horns so well. No doubt in my mind she cooperated with the network in exchange for them to make her ex-husband look good in the show.

Which leads to what has to be the first ever time a guy jotting the N word down on a piece of paper served as a cliffhanger.

Episode Grade: C-. Lionel The Juror and Meester Yohnnie could only carry us so far. This series is ready to end, even if Tuesday Night Twitter will have a gaping hole without it.