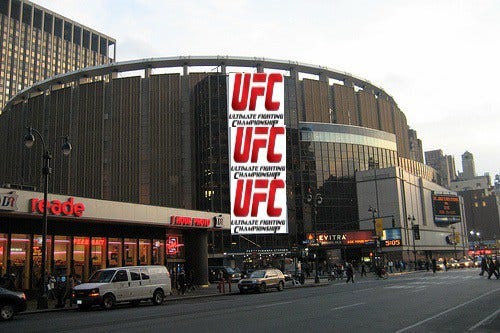 CBS- New York is poised to end its ban on professional mixed martial arts, the last state to prohibit the combat sport. Conducted inside a cage or other enclosure with a referee present, MMA bouts end when one fighter quits or gets knocked out or when judges decide after 15 or 25 minutes of fighting who the winner is. The New York Assembly plans to vote this week after years of leaving the ban intact over fears that the sport was too violent. A Democrat-controlled chamber approved MMA in 2007, then subsequently balked. The Republican-controlled Senate, initially reluctant, has voted to legalize it for seven straight years. Two Assembly committees voted early Tuesday to advance it, with a floor vote expected later in the day.

Assemblywoman Margaret Market, a Queens Democrat who chairs the tourism committee, said she initially opposed MMA after running into a group of destitute ex-boxers. Added protections for fighters have made it “palatable, at least to me at this point in time,” she said. The committee voted 15-5 for it. “This bill not only will bring professional mixed martial arts to New York, but just as importantly what it will do is it’ll allow for rules and regulations that will offer protections for the amateur fighters as well,” said Assemblyman Dean Murray, a Long Island Republican. Assemblywoman Pat Fahy, an Albany Democrat, noted those changes but voted against it, citing its violence and growing evidence of serious brain injuries and concussions in football and boxing. “In football, concussions can be incidental to the game. Here, it is more part of the sport,” she said.

One early opponent was UNITE HERE, the hotel and restaurant workers’ union, publicly citing American Medical Association opposition and the potential social costs of teens imitating fighters. One consistent advocate is Ultimate Fighting Championship, the sport’s largest U.S. promoter, whose backers are major owners of nonunion Station Casinos in Las Vegas. UFC has its eyes on hosting a major fight card late this year at Madison Square Garden and predicts there will be other professional shows next year in Brooklyn, Buffalo and smaller cities.

It’s about damn time. I’m not a diehard MMA fan or anything, but even I think this is great. Sure I have a tough time making it through an entire MMA card if people keep getting their brains bashed in on a particularly violent card. So going to a live event is still a few years away for a soft son of a bitch like me. But any sport that outlawed the fish hook can’t be all that violent. MMA has already replaced boxing as the must-watch fight sport in the world and I don’t see that changing anytime soon. I have watched and loved all of the big fights over the last year or so, which are legitimate events that are only helped by social media Some of the best Twitter moments, memes and Jordan Crying Faces have come as the result of a big MMA fight.

What I am really looking forward to is an MMA pay-per-view at The Garden. Sure it’s hokey to say, but an event that the whole world is watching always has a little extra buzz when MSG is hosting it. Even big Knicks games have a special feel to them and the Knicks haven’t been true championship contenders for more than a decade. Throw a Connor McGregor or whoever the next Brock Lesnar-esque monster is into The World’s Famous Arena as a headliner and the atmosphere will be electric.

And the fact that New York politicians have fought against it for this long is so typical. New York remains the only state in our great nation that can’t have MMA events. They are making Will fucking Smith movies about the concussion problem in football but vote down MMA whenever it comes up to vote. Ridiculous. And saying that teens will imitate fighters because it they are fighting in New York instead of Connecticut, New Jersey, on their TV, PlayStation, and/or phone is so patently ridiculous it has to make you laugh. It should be my choice if I want to see a couple of dudes beat the shit out of each other or Ken Shamrock and Kimbo Slice heavily breathe on each other for a few minutes.