This is weird right? I’m not the only one who thinks to himself, hey wait a second, signing a big free agent QB that will most likely decide whether you have a job in a few years is kind of a big deal, may want to meet with him for a couple of minutes and see if you guys gel. It feels like the Texans are actively trying to make shitty QB play their franchise “thing”. Awesome defense, crappy QB’s and losing the Saturday afternoon Wild Card game every season. Hiring Ryan Mallet with an alarm clock because there isn’t anyone else out there will most likely ensure that. And don’t get me wrong, I think Brock can be decent, but was there anything anyone saw last year that screamed, that’s the guy! He had a couple of ok games against some crappy defenses. He was composed in that Sunday night game against the Patriots, but other than that I never said, damn Brock Osweiler is going to be a star. Strange strange stuff.

Other notes from the Coaches meetings. Maybe my favorite visual of all time. 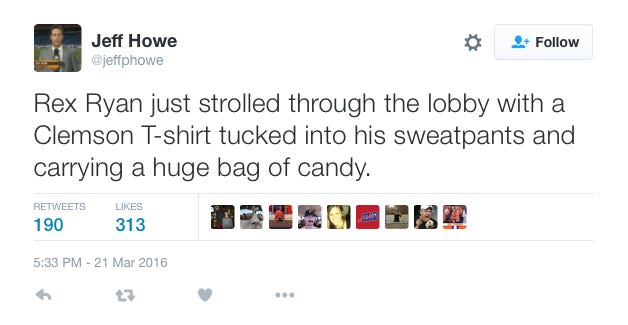