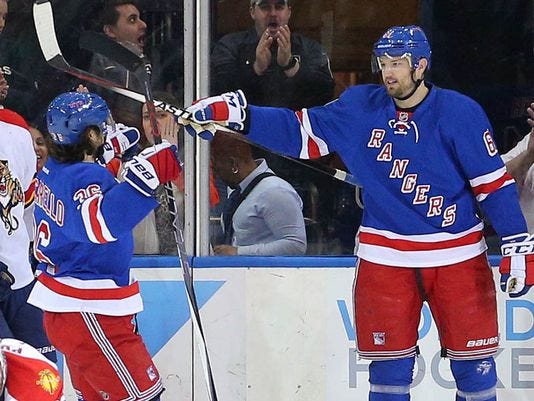 Something happened last night that many Rangers fans thought was impossible. Rick Nash finally scored a goal in 2016. That’s right. It happened, leaving fans like:

In what was probably their most complete effort this month outside of Anaheim, the Blueshirts not only got back on the winning track to retake the Eastern #2 spot (record-wise), but saw Nash pop his 2016 cherry. Injury has limited him to just 15 games this calendar year but still, that’s a long stretch for a guy who buried 42 last season to go. With his hymen busted, let’s hope Mr. Nashty gets real slutty the rest of the way.
The game still wasn’t perfect. Without a pretty PP finish out of Zuccarello, Florida was inches away from erasing a 2-goal deficit in the third period. A disallowed goal & a post were the difference in a final 20 minutes where AV’s squad improved but still played on their heels. A late Stalberg trip gave another team a late man-advantage, leading to a 6-on-4 goal that started with a battle on the boards near the blue line the Rangers couldn’t win & was finished with a tap-in after a ridiculous deflection. The Panthers earned it, but it’s another situation where the Blueshirts insist on allowing a quality opponent more lives than a Contra cheat code.
How about that 4th line? Besides the penalty, Stalberg was flying all night. His give-and-go with Dom Moore was a highlight most 4th liners aren’t capable of. Then there’s my man Tanner Glass. That’s right I said it. Give #15 his due. While other much more talented players are still struggling to find their games, Glass may be playing the best hockey of his life. That’s not saying much but accolades are deserved nonetheless. He was on the ice for the first goal, buried the empty-netter after a couple of solid plays to keep the puck in the Florida zone & threw 7 hits in a game where none of his other teammates had more than 1. The Glass hate train has finally stopped – temporarily.
Next up are the rested but reeling Bruins coming off a 0-point Cali trip that makes the one the Rangers just finished look awesome. NY might get a break & not see Rask tomorrow either. He skipped practice today due to illness & Boston’s tilt at MSG tomorrow carries a little less weight than returning home to host the Panthers Thursday. Seeing Gustavsson between the pipes could be what Nash & Co. need to pick up a little more offensive momentum with less than three weeks left before shit gets real.